It seems only appropriate this week to make some sort of mention of Le’Veon Bell. He’s the former Steelers’ star who sat out an entire season in order to get more money on the open market. That didn’t work out so well for him. He still got a nice chunk of change but it wasn’t the amount he could have gotten had he took the Steelers’ offer. Bell is now in New York where presumably he can have better resources to continue his rap career (don’t quit your day job Le’Veon). Bell is currently averaging 3.3 yards per carry and has a season long of 19 yards. He also has four total touchdowns (three rushing one receiving). In other words, he hasn’t exactly been setting the world on fire. He’s played better in recent weeks and I do expect that he’ll have an impact Sunday but I don’t expect it to be massive. While James Conner, Bell’s replacement, has had his share of problems being able to stay healthy, I tend to believe the Steelers are in a better place without Bell. Considering what he would be making per year and the amount of headaches he creates I’m fine with him being elsewhere. He provided some great moments in Pittsburgh but the Steelers ultimately made the right moves in dealing with him

NOTES… McDonald being a full participant is a positive sign but he still isn’t out of protocol yet… Joe Haden popping up with a foot issue is not good. I’m hoping this is more of a precautionary thing… While the NYJ have a TON of guys listed I expect most of them to play on Sunday.

Very honored to be a Finalist for the Pro Football Hall of Fame Centennial Class. Humbling to be included in this elite group of coaches.

Congratulations to both Bill Cowher and Donnie Shell as they have both been named to the Finalists’ list of the Pro Football Hall of Fame Centennial Class. Cowher was a very good football coach but I will never view him as a HoF’er. Too many missed opportunities. Shell has been one of the larger omissions from the great 70’s teams. He is more than deserving to be among the rest of the Steel Curtain defense already enshrined. Both L.C. Greenwood and former scout Bill Nunn were not among the list of finalists and while Greenwood has a case, the absence of Nunn is flat-out ridiculous. As much as anyone he is responsible for the birth of the Steelers’ dynasty. Without him scouting in small schools and historical black colleges, the 70’s Steelers would never have been. If we are going to honor guys like Gil Brandt then Nunn is also deserving.

A Final Note on Bell…

He mentioned yesterday that he believes he’ll be booed by Steelers’ fans on Sunday. While true, does anyone else find it funny that a player is talking about being booed despite playing AT HOME???? Gotta love Steeler Nation. 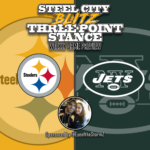