Good Wednesday to You Steelers Fans!

You’d have to admit that by and large the Steelers have been pretty healthy in 2018 compared to most teams. That good fortune may now be running out. Head Coach Mike Tomlin said in his weekly presser yesterday that Bud Dupree is dealing with a pectoral issue… Vance McDonald has a hip he’s dealing with… Xavier Grimble is in concussion protocol… Stephon Tuitt is expected to participate today in some capacity. I think it’s very possible that you could see outside linebacker Ola Adeniyi activated. Keep in mind that Anthony Chickillo recently rolled his ankle and isn’t quite 100% either. That leaves the Steelers very thin at OLB so Adeniyi could very get a hat on Sunday night. Hopefully these injuries are are of the minor variety.

Is anyone really surprised that Grimble in concussion protocol? This is what happens when you let a guy come full speed at you and deck you. I just can’t get past what happened on that play.

Ben and I recorded Episode 108 of the Steel City Blitz Steelers Podcast presented by 26shirts.com/Pittsburgh last night. Hear our thoughts on the Steelers’ frustrating loss in Denver.

I think the Ravens are creating a very difficult situation for themselves right now. Three weeks ago John Harbaugh was as good as gone but after two home wins with Lamar Jackson at QB, there are some thinking a strong finish will save his job. Jackson has been mostly impressive with his legs but in the NFL that only lasts so long. You have to be a competent thrower of the football in this League. Gut tells me Harbaugh is still going to hit the market where he’ll be a hot commodity at both the pro and collegiate levels.

I said it on the podcast last night and I’ve said it at other times in this season but the Steelers of 2018 will only go as far as Big Ben takes them. We know he’s capable of throwing for big yards and multiple scores but the turnovers have to stop or this team won’t go anywhere in the postseason. Not all of those turnovers are on him I understand that but at the end of the day the buck stops with the QB.

Speaking of Roethlisberger, if you think he threw rookie James Washington ‘under the bus’ yesterday on his weekly radio appearance then you weren’t paying attention. What did he say that wasn’t true? I think fans are often afraid of the hard truth especially when it’s spoken by those who aren’t liked by them.

Coming up this week I’ll examine why the Steelers’ pass happy offense Sunday wasn’t such a bad thing. 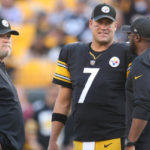 Why the Steelers’ Pass-Happy Gameplan Wasn’t So Wrong