SCB Steelers’ Quick Hitters: The “And So It Begins” Edition

Today is the first day of what we all hope is a long journey towards a seventh Lombardi Trophy. The players will arrive today by any number of various conveyances. Some will be stylish and fast while others will be as simple as it could possibly get. How they get to Latrobe and St. Vincent’s College really doesn’t matter. What matters at the end of the day is that when this team kicks off in week one, it’s healthy and it’s prepared for battle all the way through February.  And so it begins….

Last night on the Steel City Blitz Podcast Presented by 26shirts.com/Pittsburgh Ben, Cnic and I broke down the offense heading into Training Camp. Who are the locks? Who are the probables and who has extremely long chances of making the roster? Tune in and see if you agree.

While it has been suggested that Alejandro Villanueva will hold out I don’t think he will. His choices are simple; either he signs one of two offers given him by the Steelers or he sits out 2017 and finds himself in pretty much the same position in 2018. As Ben has also pointed out before, this isn’t a situation where the Steelers are known to negotiate during camp. I think Big Al shows.

#SteelersNation who's comin out to camp??

On the other hand is Le’Veon Bell who I do not believe will show up. Once Camp breaks he’ll sign the tag and show up. I’m not overly concerned and you shouldn’t be either.

Nice move by EA Sports who showed a large number of NFL rookies getting their ‘Madden 18’ ratings. It’s amazing how culturally relevant the Madden series has become. And yes, I’m old enough to remember the very first one. Heck, I still remember PONG!

One concern I always have heading into Training Camp is the expectations placed on rookies. From James Conner to JuJu Smith-Schuster, this is a really charismatic and likable group of young men. But please give them a chance to get their feet under them before making any judgments. 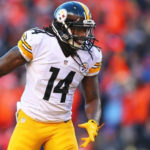