It’s Monday Steelers’ Fans and there’s nothing good about it.

The Steelers resembled a MASH unit by the middle of the second half and went on to lose to Seattle 28-26. At this time, I do not know the statuses of Ben Roethlisberger, James Conner, Vince Williams or Sean Davis among others. Regardless, the Black and Gold are 0-2 and things aren’t looking real good. Here are my thoughts from the game.

[UPDATE]: Per Mike Tomlin, Ben Roethlisberger will need surgery and his out for the season.

-The running game had slightly more spark than it did in week one but I continue to be stunned by the lack of faith in what I thought was one of the top offensive lines in pro football. I understand New England and Seattle have solid defenses but how do you know you can’t run if you don’t try?

-Randy Fichtner is trying my patience. The number of empty sets has gone overboard. There is zero threat of a run (sans and end around which would be dumb from that formation) and if the ball isn’t out quickly then the play likely dies an awful death. And what’s with all of the shotgun?? Taking a snap from under center is still legal isn’t it?

-Even before Ben Roethlisberger left the game with an elbow injury he was not playing well. I continue to believe that taking Wednesday’s off is far worse for him than it is better.

-Donte Moncrief should not see the field until his finger is 100% healed. At the very least.

-Good to see Vance McDonald involved in the gameplan. Not sure why it took last week to figure this out.

-The Steelers have to be better on third downs. The play-calling is bad and the execution is bad. There’s no other way to put it.

-Mason Rudolph was solid yesterday. He was far better than Teddy Bridgewater, the highest paid backup in the NFL, was in relief of Drew Brees. Rudolph took more practice snaps than Roethlisberger did in the week leading up to the game so I’m not surprised he was up to the job. Now comes a San Francisco defense that gets after the QB and creates turnovers.

Tweet of the Day… A Nation holds its collective breath.

A decision is expected today on whether Steelers’ QB Ben Roethlisberger will need elbow surgery, per league sources. Roethlisberger wants to avoid it all costs, but ultimately doctors will decide whether that’s possible.

-And people wonder why I hate replay reviews and believe they should be banned for everything except scoring plays. The Steelers had Seattle in a 3rd and 20 deep in their own territory only to see the Seahawks bailed out because Pete Carroll challenged a non-call. We can argue whether Terrell Edmunds should have been flagged or not all day long but these calls are just out of control.

At 0-2, the Steelers now have to make the daunting west coast trip to San Francisco who is 2-0 and both wins came on the road. This season could get away from the Steelers before it really even gets started.

-Kudos to Stephon Tuitt and T.J. Watt yesterday who I thought were the best defenders on the field. Tuitt’s performance is exactly the type of thing we’ve been expecting to see from him on a consistent basis.

-Our secondary play is really poor and it isn’t just Kam Kelly or Mike Hilton. Sean Davis looks lost sometimes and outside of Joe Haden, the rest of the secondary has very poor ball skills.

-Stop me if you’ve heard this before but why do we make the same mistakes over and over again? Miscommunication, poor tackling, being out of position, not making adjustments…. These are things that should have been fixed years ago and remain a problem today.

Here’s what the Steelers face in the next three weeks. They travel to San Francisco to face a 2-0 Niners team in their home opener. Then they return to face Cincinnati in primetime. With the Bengals playing this week in Buffalo, it’s possible the two teams could both have 0-3 records. Then they host Baltimore in what could very well be a ‘must-win’ game in just week five.

Long way to go Steeler Nation so keep your heads up! 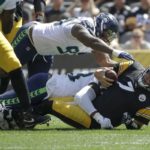