Good day fans of the Black and Gold! More on that later…

Steelers’ Head Coach Mike Tomlin will host his press conference today at Noon ET. I expect lots of cliches today and yes, even a few “obviouslys.” I mean, after what happened in Miami what else could he possibly say?

Ben Roethlisberger’s surgery was about 20 minutes long yesterday. As it turns out, there was not a tear of the meniscus. Instead, it was a simple clean up procedure and Big Ben was home by early afternoon. While I don’t think he’ll play as of right now, don’t be surprised if he slaps a brace on that leg and gives it a go against New England.

I honestly don’t know how anyone could have formed an opinion on any of the Steelers’ rookies yet. Artie Burns has already played way more than the team wanted him to because of the loss of Senquez Golson. Javon Hargrave has areas to improve but who didn’t know that? He too has been pressed into action sooner than expected. On the same token, Tyler Matakevich was forced to play Sunday and wound up leading the team in tackles. Should we crown him the next great Steelers’ linebacker for the same reasons people are down on Burns or Hargrave? Let these guys get a season under their belts before we start judging.

Tried to curb my enthusiasm when I met Larry David on the sideline! #TheJock @westwood1sports pic.twitter.com/Xiq7fCqNuv

I’m very curious to see how Keith Butler attacks the Patriots’ offense. He cannot sit back and give Tom Brady all day against a three-man rush but he can’t bring the house all the time either. Butler will have to be calculated with his defense and look for trends since Brady returned.

You won’t like this one bit but did you ever notice the Baltimore Ravens rarely get blown out of games? As banged up as they are on both sides they continue to be competitive in every game. That’s not something the Steelers have been able to say this season.

That Bud Light commercial irritates me… They say “black and yellow” when describing the Steelers’ fan. It’s BLACK and GOLD idiots!

Rich’s Take on the Steelers’ Loss in Miami 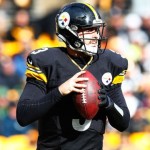