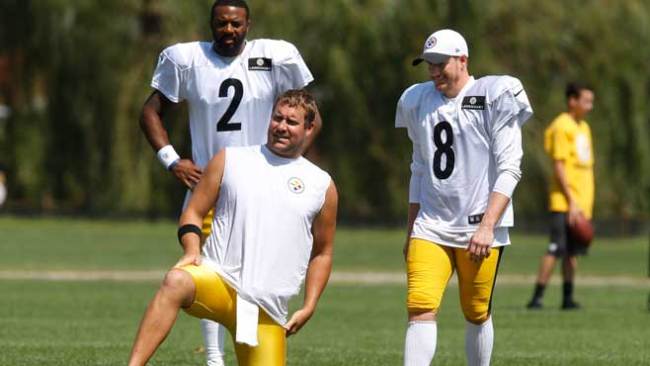 The Steelers will practice at 530pm ET tonight so please note that time change from the usual 255pm.

Tomorrow the team will travel to Jacksonville for their game Friday night against Jacksonville so there is no practice on Thursday.

ICYMI… Here’s some stuff from us this week on the website including our first-ever live podcast. Chris had a great piece on the Steelers and the two-point conversion as well as this one on Ryan Shazier.

Now, onto some on-field stuff…

Steelers’ Head Coach Mike Tomlin is taking some flak for Shaun Suisham getting hurt. I see this a bit differently. First of all, it’s football. People get hurt! I don’t put any of that on Tomlin. Where I think Tomlin erred slightly is by not having another place kicker in camp. Even if you’re happy with your kicker, you should have someone in camp to at least take a few reps to keep your kicker’s leg fresh.

I still think Garrett Hartley is nothing more than a stop-gap right now for the Steelers unless he just kills it in the preseason. There are several kicking competitions going on in other camps across the league and there will be some better kickers available before the season starts.

Martavis Bryant was back on the practice field yesterday for the Steelers and made several nice plays that drew ‘oohs and aahs’ from the crowd.

James Harrison was on the field in his first padded practice and several observers noted the team had a little more intensity with his presence. While I love this, I also hope that attitude and presence carries over to someone else on the defense. Deebo won’t be around forever.

I think you’ll see one final audition by Landry Jones Friday night and he’ll probably get some help with a little more action from first-teamers. That said, I think it’s just time to move on from Jones.

I’m not suggesting that Tajh Boyd will take Jones’ spot because he has to prove he can be more consistent and he’ll get his chance soon. But don’t hold Boyd’s troubles with the Jets against him. Who knows what that environment was like? We got a decent idea yesterday didn’t we Geno Smith?