You may have seen my article on Antonio Brown last night and while I expected some attention I didn’t quite expect the deluge of comments which is completely fine by me. If I make people think, that’s all I can ask. Either way, the article, based on Brown’s recent personal life issues which he made public, have created quite a firestorm. I do not expect everyone to agree with me but why people felt the need to bring Donald Trump into the discussion is beyond me. That actually offended me more than being called names and being accused of things!

1) We as fans tend to always give our players the benefit of the doubt without knowing one way or the other. If you want to reserve judgment, fine. But, don’t say he’s done nothing wrong, because you don’t know that.
2) People seem to have lost touch with the fact that when people live their lives in the public eye, especially a guy like AB who not only lives publicly but does so in sometimes outlandish fashion, there are going to be times that people are going to talk about that. The things they say aren’t always going to be nice. When you share your business with the whole world, you accept that possibility.

Former Patriots’ tight end Aaron Hernandez reportedly hanged himself this morning in his jail cell. He was fresh off of a ‘not guilty’ verdict in a double-murder trial and was preparing for his appeal for his conviction of murdering Odin Lloyd. Seems an odd time to do this. It’s like having one hurdle left in a race and then deciding to quit. Something stinks about this but I’ll be honest; I really don’t care.

Phase One of the Steelers’ Organized Team Activities is underway! This phase is simply rehabilitation for players as well as strength and conditioning for the next two weeks.

Tweet of the Day… Vince Williams is ready to go!

Coming up tomorrow night on the Steel City Blitz Podcast, we will be joined by Del Reid of 26shirts.com and rising draft prospect Javancy Jones of Jackson State University.

I don’t understand why people get so fired up over whether Terry Bradshaw attends a funeral or not. If all you have to base your knowledge of Bradshaw on is his recent comments about Mike Tomlin or the Steelers then you really don’t know anything about him. I highly suggest you read his books. They will open your eyes and help you understand why he is the way he is.

The Draft is in eight days…. Please hurry. 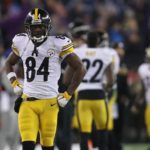