Good Thursday to you my fellow Black and Gold Faithful.

As only he can do it, Baltimore linebacker Terrell Suggs was asked about whether he expects Ben Roethlisberger to play Sunday, and his response was “Don’t fall for that … I saw this movie before, you know,” Suggs told reporters at Baltimore’s weekly press conference. “He’s gonna act like ‘aw, I’m not playing, I don’t know, I did individual [workouts] a little bit.’ But then he’ll walk his big ass on out there and [I’ll be like] ‘how you doin’ Benjamin.” Suggs is Public Enemy number one when it comes to hated members of the current Ravens’ team but there’s great respect between he and Big Ben. It’s what makes rivalries what they are. (h/t SB Nation for the quote)

The practice report from yesterday continues to show some optimism on several fronts. Ben Roethlisberger (knee) and DeAngelo Williams (knee) were limited but Cam Heyward, Antonio Brown (hip), Marcus Gilbert, Shamarko Thomas(groin) and Markus Wheaton (shoulder) were all full participants. It’s my own personal opinion but I really think Big Ben needs to have full participation today and tomorrow in order to play Sunday.

‘Nail the Number‘ is back for week nine. Check it out and participate!

Here’s my write up on game-planning the Ravens’ offense.

Highlights of Le'Veon Bell's latest track include a dig at the Bengals, clarifying that he is not O.J. Simpson and a Manziel namedrop

I hate the term ‘must-win’ because all games are ones in which a team ‘must win’ in my opinion. That said, this is a huge game for Mike Tomlin. His team has dropped five of the last six versus Baltimore and eight of 11 overall. He has a more talented team but as we know, that doesn’t always mean much. The Steelers need to prove they can win a big road game and this one classifies as such.

I will be at the game versus Dallas on November 13th. Would love to meet you and say ‘hi.’

Wild prediction for Sunday: Jarvis Jones gets a sack. 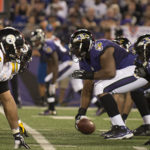 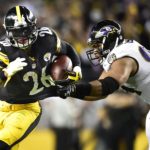