James Harrison continues to win at everything he does. Yesterday, Harrison sent a a sworn affidavit to the NFL Offices in which he states “I have never violated the NFL Policy (for) Performance Enhancing Substances.” It is largely believed to be Harrison’s final salvo lobbed at the NFL as he gets ready for training camp. All I can say is that I hope everything that Deebo says is true and at this point, we have no reason to believe otherwise.

ICYMI: Here was our Training Camp Primer. Later today will be the first of our “Training Camp Battle Reports” as well.

The SCB Steelers’ Fan Podcast presented by Body Tech Gym is getting ready to fire up once again. As soon as it’s ready to go we’ll get it out for your listening pleasure.

I believe all of the talk about the many records that Antonio Brown could reach in 2016 are misguided. I wrote yesterday about the need for balance in the Steelers’ Offense.

Tweet of the Day… LB getting some love from JB.

JB is that guy! someone still believes in me https://t.co/PN9fBEANq5

Make sure you visit our partner site, www.pittsburghsportsintiative.com for Steelers, Pens and Pirates news!

According to an Emory University Poll the Patriots’ fans have eclipsed Cowboys’ fans as the NFL’s “Best Fans.” The Steelers ranked 18th. I hate polls period but could this be an indictment of a lot of empty seats at Heinz Field? I think so…

The ESPY’s are tonight. I personally don’t care but you might. Antonio Brown is expected to be there. 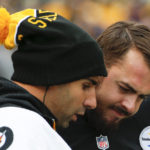