Welcome to Friday Steelers’ Fans! Hopefully the weather is going to be great in your neck of the woods today.

Earlier this week the Steelers signed tight end David Johnson to a one-year deal. Johnson is a former draft pick of the Steelers who spent the last two seasons in San Diego. This is a depth signing and nothing else. Johnson can fill in at tight end and play some fullback if necessary. With Will Johnson off to New York, that leaves only Roosevelt Nix as the fullback. The position isn’t used a ton in Todd Haley’s offense but Nix upgraded it with his blocking in 2015.

Yesterday I wrote about Le’Veon Bell and his soon-to-be collaboration with Snoop Dogg. Let me be very clear on this because some fans hate ‘real talk.’ I have no problem with Bell rapping. I like players who have other interests in life because I think it ultimately makes them appreciate their football career more… My problem with Bell getting together with Bell is how it looks. Here’s an all-pro player with a marijuana bust in his past going to hang out in the studio with a one of the world’s foremost pot smokers. That’s my problem with it and I guarantee the Steelers feel the same.

Steelers’ linebacker James Harrison may be in some trouble with the league for recording his drug test several weeks ago. I’m guessing Deebo probably didn’t know the rule against doing such a thing. Not a big deal in my mind… Pay the fine and move on.

Tweet of the Day… Da Beard, Shawn Michaels and the Pens!

Yes @ShawnMichaels! Awesome you are coming to game 5 to see our great city, fans & @penguins! I have to warn you I get rowdy at the games.

You may know by now that ESPN’s Mike Tirico who has called Monday Night games with Jon Gruden has moved on to NBC. I like Tirico and think he did a terrific job on MNF and will be sad to see him go. His replacement is long-time play-by-play man Sean McDonough who does a very good job but I don’t find him to be engaging enough for that role. Certainly won’t keep me from watching but a little more energy in this role would have been nice.

I’ve long been an advocate for the Steelers to go back to the block numerals on their jerseys. I realize the new numerals have been around quite awhile now but I’m a traditionalist. Therefore, look for the hashtag #blocknumerals being tweeted by me. It’s time to start the revolution! Or something like that. 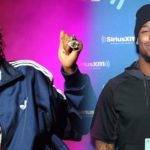 As a huge Steeler fan i think from here on out the key thing is focus. Everything done should be towards winning a Superbowl. Nothing else should be acceptable It’s time for Tomlin to call the troops and circle the wagons. And above all FOCUS ON WINNING hasn’t that always been the Steeler way.