As we get ready for the week 16 showdown, both Marc and Matt look back look back at the big 27-20 win on the road in Atlanta, that moved the Steelers 9-5 on the season and keeps them just a 1/2 game behind the division leading Bengals.

The Falcons did a solid job of keeping Le’Veon Bell in check in the rushing department, but the Steelers offense was able to compensate in the passing game where Ben proved yet again why he is elite, and why guys Bell, Brown, and Heath continue to be top flight weapons in Todd Haley’s offense.  We also look at the amazing stats of the 3B’s.

Topics for this week’s show include the impact of Bell in the passing game, the pro bowl season that Ben is having through the air and the possibility of a 5,000 yd season, as well as Antonio Brown and Heath Miller. We also talk about horrible call against Jason Worilds on his text book sack of Matt Ryan, as well as the defense in general.  What will it take for the Steelers to win again this coming week against the Chiefs?  Tune in and find out! As always please leave comments or hit us up on Twitter! 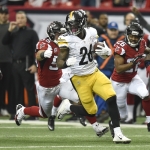