The Pittsburgh Steelers enter 2020 with some intriguing question marks in their offensive backfield. James Conner is capable, when healthy. Jaylen Samuels has had moments where he shined too, when healthy. Benny Snell proved he could be a ‘between the tackles’ runner but can he do anything else? There are additions however this unit suddenly has the potential to be very good if things break right.

One of the best stories in football faces a crucial season. James Conner has been a very good running back – and here it comes – when he’s healthy. In his last two seasons prior to 2020 he’s played in 23 of 32 games. That’s not terrible but his injuries have been the type that have become bothersome and nagging. He’s proven, as he did in 2018, that he can be a major force running and catching the ball. None of us should expect a new deal for him until free agency begins next year. With the free agent crop of running backs expected to be huge along with a big running back draft class, Conner has his work to do in order to get the type of pay day he may have been due two years ago.

A jack of all trades when he arrived from NC State, Samuels has had some injury issues of his own. There is no question that his knee was not the same when he returned last season. His burst and overall speed just wasn’t there. Many point to his big game against New England back in 2018 and that’s certainly nothing to blatantly dismiss but I remain of the opinion that Samuels just isn’t a viable and steady every down back that has been needed in the past.

The rookie carried the ball just over 100 times for 426 yards for a respectable 3.9 yards per carry but the bulk of those were between the tackles. That’s fine if that’s all that’s needed from him but as a feature back he has to be able to provide more versatility. Don’t be surprised to see him show up slimmed down a bit in an effort to be better on the edges. That said, he really is the only “hammer” the Steelers have so I could be wrong here.

The signing of Watt came as a surprise to Steelers Nation and it was mostly welcome. Rosie Nix was a popular player but had missed time and the reports were that his health was not where the Steelers wanted it. Watt immediately brings a three-pronged set of skills with him from the Chargers. He blocks well, he runs the ball well in short yardage and he catches the ball well too. Call me a bit crazy but I’m excited to see what Randy Fichtner and Matt Canada do with him. He’s also terrific on Special Teams as well.

The rookie from Auburn faces a daunting challenge in terms of making the roster.

This young man was drafted for a simple reason; speed. McFarland possess the ability to take the ball to the end zone any time he touches it. He may be just 5’8″ but at 193 pounds he possess good strength and balance. McFarland. Jr averaged just shy of seven yards per carry at Maryland and also proved he could catch the ball fairly well too.

Go ahead and pencil in Watt as your fullback and special teams’ guru. Conner and Snell will also be on the roster as well. The major issue here is the third running back that the Steelers typically carry on the active roster. You might say that Samuels has a decided advantage with two seasons under his belt but the Steelers didn’t draft McFarland to just cut him. Now he will have to prove he can pick up the offense, handle the blitz and just know what he needs to do before we can anoint him as a player. I think Kerrith Whyte is an intriguing option who saw limited time last year but for the most part I think we have our backfield. 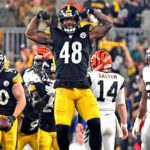 No Long-Term Deal for Dupree; Steelers Will Move Forward in 2021