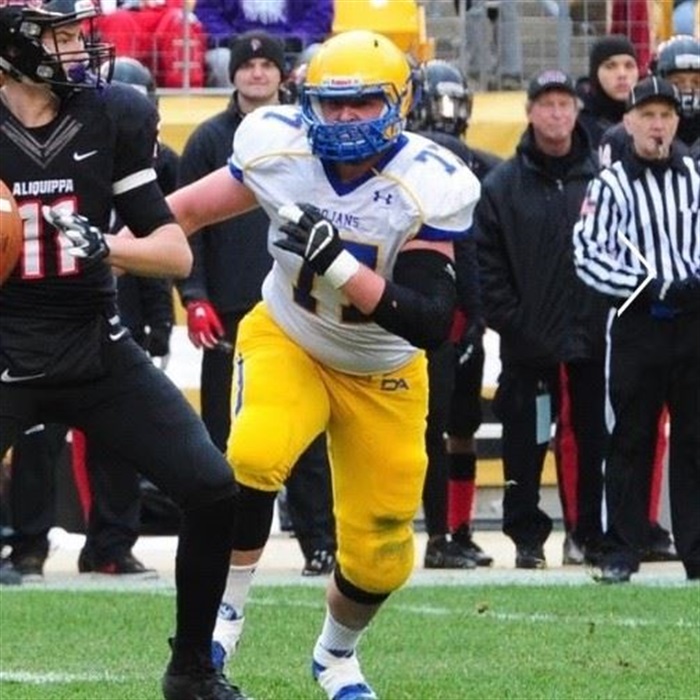 Last season, as a junior, Gavin Adams was one of the captains on Derry Area’s football team. He helped lead Derry to the WPIAL 3A championship game. In their first WPIAL Championship Game appearance since 1945, Derry lost to Aliquippa in 42-19. Adams will be a senior in the fall for Derry’s football team as he will try to help get his team back to Heinz Field in November.

What are the expectations for Derry Area’s football team in 2019?

Gavin Adams: “I believe we can do great things with this young group of guys. In all honesty, if we stay healthy, we might be as good as last year.”

Last season, you guys lost to Aliquippa in the WPIAL 3A football championship game. What did your team learn after that loss?

GA: “The offensive line learned we need to keep our eyes up more on the backside.”

Tell us about your relationship with your head coach, Tim Sweeney.

What is the most fun about being an offensive tackle?

GA: “Knowing who and where you’ve got to hit someone, as well as executing that play from knowing your opponent.”

What are you most looking forward to in your senior year of high school?

GA: “My best year of high school football ever. Also, running through the bikers that rev the engines entering the field.”

As a football player, what does your diet consist of?

GA: “A lot of food, water, and best of all sqwinchers. No pre-workout drinks, no whey protein, just all natural.”

When it comes to sports, which school do you think Derry Area has the biggest rivalry against?

In a high school football game, who is the best player that you have ever gone against?

GA: “Not really sure, but if I were to say my own teammates, I’d probably say Max Malis, Justin Fallat, Noah Wincek, and a few other guys.

Tell us something that people would be surprised to know about you.

GA: “I can do a pretty good Scooby-Doo impression, and Shaggy impression.”

[…] Latrobe (who now plays in 4A) leads the all-time series 35-21-1 over Derry (who plays in 3A). In our interview with Derry lineman Gavin Adams, he named Latrobe as Derry’s biggest […]