The Question is, How Often Was Tomlin Taking Control? 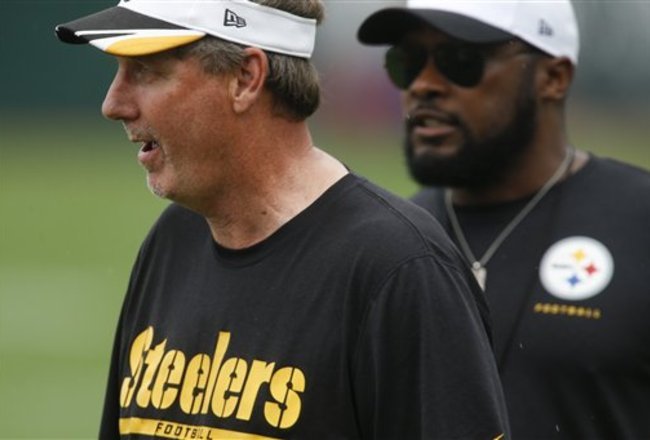 Pittsburgh Post-Gazette Steelers’ beat writer Ed Bouchette had some interesting comments in his recent article on the state of the team. Besides the fact that Le’Veon Bell was frequently late to practice and even games, was the statement about Head Coach Mike Tomlin.

There was some surprise no coaching change was forthcoming on defense, but if that were to occur, Tomlin might have to start with himself. He called many of the defensive plays from the sideline this season. He also took charge of many of the secondary meetings and those with the entire defense. (quote courtesy post-gazette.com)

When Mike Tomlin was hired by The Rooney’s he had served for just one year as a defensive coordinator at the professional level. His other pro experience was as a secondary coach. But Bouchette’s above statement raises eyebrows and it should. The problem is that there are questions about the statement as well. For instance…

How often was this occurring?  If you think Bill Belichick stays silent in defensive group or full unit meetings then you’re nuttier than a fruitcake. That said, how often was Tomlin involved? Was he involved on a daily basis? Weekly? Once in awhile? As the head coach he can be involved as often as he wants to but there’s also something to be said for delegation and micro-managing.

If Tomlin was taking over calls during games then which ones and how often? Did you ever notice that “deer in the headlights” look that Defensive Coordinator Keith Butler often sported? Seems to me it was most often in the second half of games but I digress. The idea of having coordinators is to entrust them with doing their jobs. Typically, that means putting together gameplans and calling plays among many other things. Unless there is an understanding established early on then I don’t get why Tomlin was making calls. Suggestions? Sure. Game management situations? Yes. But we need answers here. How often was this happening?

What does this say about Carnell Lake and/or Keith Butler? I don’t believe it to be a secret that there have always been concerns about Lake’s ability to coach. These concerns date back to his coaching duties at UCLA and have continued during his time as secondary coach in Pittsburgh. As fans, you must be able to separate Lake’s coaching from his playing days. They are two entirely different things so don’t let that cloud your judgment. As for Butler, how must it feel to have your authority usurped by the boss? Tomlin and Butler have spent many seasons together but it can’t be a good feeling to know Tomlin feels like he can do a better job in certain situations. Furthermore, what does this message tell the players? There should be trust built between players and position coaches but that trust can be destroyed if the players see their coach being overruled.

What is most concerning in this is that to this point, we’ve been told there will be NO changes to the defensive staff. Perhaps this is because Tomlin likes to have the ability to control things himself? For all the talk of Todd Haley not being retained it wasn’t his defense that has been torched in two straight playoff games.

Despite moments in past seasons where we knew Tomlin selected certain personnel for certain situations, this is a giant leap beyond that. The normally buttoned-up Steelers can’t be thrilled with this getting out and I suspect we’ll never get any more than what we’ve gotten. Regardless, I find this a bit troubling.