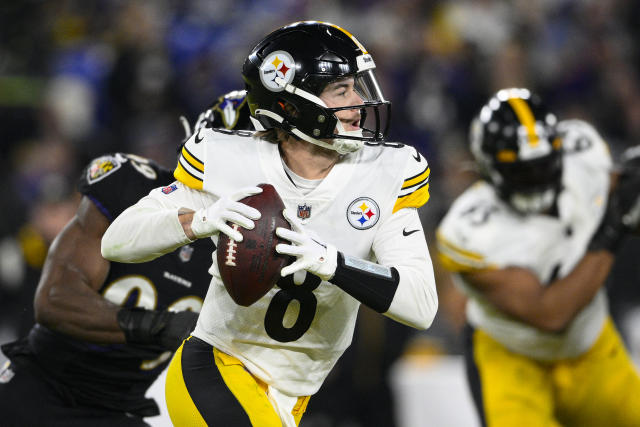 The Steelers pulled out a 16-13 victory over the hated Ravens to keep their incredibly slim playoff hopes alive thanks to a last-minute touchdown pass from Kenny Pickett to Najee Harris. In the process, those two cemented their legacies as legends in the Steelers-Ravens rivalry. This was the Steelers 5th win in the last 6 years in Baltimore, after winning just 3 of the prior 14 in the Charmless City. Overall, the Steelers are now 14-13 against the Ratbirds in the unfriendly confines of Baltimore. No other NFL team has won double-digit games in Baltimore since their franchise moved from Cleveland in 1996, and only the Bengals (9 wins) have more than half as many as Pittsburgh’s 14.

The Steelers-Ravens rivalry has been defined by last-minute victories and fourth quarter comebacks. The fourth quarter, particularly in Baltimore, are where Steelers legends are made. In 9 of the Steelers’ 14 road wins in Baltimore, they have needed a go-ahead score in the second half to win the games. Here is a look back at the players who made themselves legends in the NFL’s most heated rivalry.

This one started about as bad as possible. Kordell Stewart threw interceptions on the Steelers first three drives that led to three Ravens touchdowns, two by former Steelers Eric Green and Bam Morris. The Ravens took a 24-7 lead into halftime. The tide began to turn when Will Blackwell returned the opening kickoff of the second half for a touchdown. Towards the end of the third quarter, Kordell caught fire. He hit Charles Johnson to a touchdown to cut the Ravens lead to 24-21 entering the 4th quarter. Kordell then exploded for 3 touchdown passes (2 more to Charles Johnson) and a 74-yard touchdown run in the fourth quarter to lead the Steelers to a 42-34 victory, which was their first win in Baltimore.

Another back-and-forth game saw the Steelers carry a 17-10 lead into the fourth quarter. Midway through the third quarter, the Ravens had benched ineffective starter Scott Mitchell in favor of backup Stoney Case. The Ravens cut into it with a Matt Stover field goal but Kris Brown answered with his own to stretch the lead back to 7 with 2:39 remaining. Case hit two big passes to get the Ravens into the red zone then hit Qadry Ismail with 1:22 remaining to tie the game at 20. After Will Blackwell returned the ensuing kickoff to midfield, Kordell completed 2 passes to get into field goal range. Kris Brown came out and booted the game-winner as time expired from 36 yards out.

Baltimore held a 6-0 halftime lead. In the 3rd quarter Kordell hit Hines Ward for a 45-yard touchdown to tie the game. Kris Brown would miss the extra point but redeem himself on the following drive with a 24-yard field goal to give the Steelers the 9-6 lead which they would hold for the final 21 minutes. Neither team scored in the fourth quarter. The Ravens got inside the Steelers 40 twice, but the defense kept them out of field goal range. The decisive play was the Ravens choosing to punt on 4th and 6 from the 33 rather than trying a 50-yard field goal with 8 minutes left in the game.

In a game of field goals, the Ravens held a 9-3 edge heading into the fourth quarter. The Steelers would put together a drive early in the 4th quarter thanks to a big completion to Hines Ward over the middle. They would get into the red zone but not be able to crack the end zone, settling for a Jeff Reed field goal that cut the Ravens lead to 9-6. After the Ravens drove into Steelers territory looking to put the game away, Lawrence Timmons flew around the edge on 3rd down and stripped rookie QB Joe Flacco. The Steelers weren’t able to recover, but the bouncing ball knocked the Ravens out of field goal range, setting up one of the most epic finishes in the history of the rivalry. Needing 92 yards against one of the best defenses in the league, Ben Roethisberger worked it down the field, finding Hines and Nate Washington for some big time gains. On 3rd and goal from the 4, Ben scrambled to his left, came back to his right, and hit Santonio Holmes who made aa diving grab at the goal line for the game-winning touchdown. William Gay would seal the deal with an interception of Flacco on their last-gasp efforts. The victory gave the Steelers the division title, which would also give them the rights to host the AFC Championship Game a month later against the same Ratbirds. This was also Ben Roethlisberger’s first win in Baltimore.

Ben gots his nose broken early in the game by Haloti Ngata. The Ravens struck first with a first quarter touchdown to Anquan Boldin. The teams traded field goals in the third quarter as the Ravens held a 10-3 lead going to the fourth. The Steelers put together a long drive at the end of the third quarter but couldn’t punch it in from the doorstep, settling for a Shaun Suisham field goal. Due to an in-game injury to Daniel Sepulveda, Suisham also did some punting in this game. The Ravens were content to trade punts in the fourth quarter as the Steelers couldn’t get anything going. Finally, with under 3:30 to play, Troy Polamalu came around the edge and strip-sacked Flacco for a massive turn of momentum. Lamarr Woodley returned the fumble inside the 10 yard line to set up the Steelers with a chance to win. On the first, Ben somehow shook off a sack from Terrell Suggs who was draped all over him to throw the ball away. Two plays later, Ben hit Isaac Redman on a slant route who spun through the middle of the Ravens defense for a game-winning touchdown.

Ben Roethlisberger was injured in a win over Kansas City and Byron Leftwich was injured the following week in a loss to the Ravens. The starting duties then fell to Charlie Batch who had a disastrous game against the Browns where the Steelers committed 8 turnovers. Batch would get another start in Baltimore and redeemed himself in epic fashion. The Steelers drew first blood with a Shaun Suisham field goal. The Ravens would come back in the second quarter with two Justin Tucker field goals and a Joe Flacco touchdown pass to Anquan Boldin that gave the Ratbirds a 13-3 lead. The Steelers would cut into the lead with a Suisham field goal before the half and then tie the game with a Jonathan Dwyer touchdown run to start the third quarter. The Steelers fumbled on the ensuing possession and the Ravens converted it into a Ray Rice touchdown to take the lead back at 20-13. The Steelers would drive into the red zone early in the fourth, but Ed Reed intercepted Batch’s pass in the end zone. Three plays later, James Harrison ripped around the edge and strip-sacked Flacco. Batch would convert that into a game-tying touchdown pass to Heath Miller with 7:24 left in the game. After the defense forced a punt, Batch drove the Steelers 61 yards (with the last 15 coming on a roughing the passer penalty) for Shaun Suisham to hit the game-winning 42-yard field goal as time expired.

The Steelers opened the scoring with a Robert Spillane pick-6 but the rest of the first half belonged to the Ravens as the Steelers could not stop their run game. Baltimore built a 17-7 halftime lead. The Steelers started to put things together in the third quarter after Alex Highsmith intercepted Lamar Jackson. Two plays later Ben hit Eric Ebron for a touchdown. On the next Steelers possession they drove it down the field and James Conner punched it in from a yard out to give the Steelers a 21-17 lead. In the fourth quarter, Lamar Jackson hit Marquise Brown to put the Ravens back in front. Ben came back and drove the Steelers down the field, hitting Chase Claypool for an 8-yard TD with 7:30 left. The Steelers defense would come up big in the red zone down the stretch. On 4th and 3 with 2 minutes left, Robert Spillane would recover a Lamar Jackson fumble. The Ravens got the ball back with under a minute to go and drove inside the 25. Minkah Fitzpatrick broke up a pass on the goal line as time expired to seal the victory.

Ben Roethlisberger’s final regular season game AND TJ Watt tied the regular season sack record. Baltimore took a 10-3 lead in the third quarter but in the fourth the old gunslinger had just a little left. After a 23-yard punt return by Ray-Ray McCloud gave the Steelers the ball at midfield, Ben drove the team down for the go-ahead score, including a 3rd and 9 conversion to McCloud. Ben’s 6-yard pass to Claypool put the Steelers ahead 13-10. But the Ravens would come back and tie the game with a Justin Tucker field goal. In overtime, Ray Ray McCloud would be the hero again, reeling in a 10-yard dart from Ben on 4th and 8 to get the Steelers into the red zone and into field goal range. Boswell converted and gave the Steelers a 16-13 victory which would be enough to send them to the playoffs.

Both teams were content to run the ball and grind the clock in this game. As such, there were only two drives in the first quarter, each resulting in a field goal. Chris Boswell clanged a 48-yarder off the upright with 3:30 to play, giving Baltimore a chance to double up around the halftime break. The Ravens took advantage, with some help from the zebras after a terrible personal foul call after a third down stop gave them new life with under 20 seconds to play. The Ravens would score and take a 10-3 lead into halftime. Baltimore would in fact double up with a Justin Tucker 51-yarder after halftime to extend the lead to 13-3. Not to be outdone, Boswell answered with a 51-yarder of his own. The Steelers would drive into the red zone early in the fourth, but weren’t able to punch it in, cutting the lead to 13-9. After the teams traded punts, the Steelers got the ball back with just over 4 minutes to play. Kenny Pickett drove the Steelers down the field, including a tight window throw to Steven Sims across the middle. With just over a minute to play, on 3rd and goal, Pickett rolled out to his left away from pressure and made a throw on the run to Najee Harris on an improvised wheel route in the front corner of the end zone. Minkah Fitzpatrick would intercept Tyler Huntley to end the game.