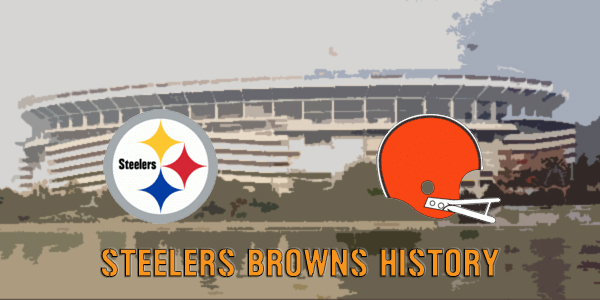 When Cleveland joined the NFL in 1950 after the AAFC folded, they dominated their Turnpike rivals in Pittsburgh. Both teams were members of the newly created six-team American Conference.

The Browns won eight of the first ten Conference titles while the Steelers never finished higher than third. Whenever the two teams met, it was invariably the Browns who came out on top. Pittsburgh could only manage to win four of their first twenty contests.

The sixties were not much better for Pittsburgh and as the contests moved into the seventies, the Steelers carried over a six-game losing stretch. Coach Chuck Noll broke that streak in 1970 with rookie quarterback Terry Bradshaw. The Steelers rolled over the Browns 28-9 in Pittsburgh. Even though they lost the rematch in Cleveland, the home win for the Steelers was the pivotal point in the rivalry between these two teams.

The following year they again split the series with the Steelers winning their home game 26-9. With Chuck Noll’s development of the team starting to produce results, they began the 1972 season with high hopes of a division title.

The first contest between the rivals that season was a week 10 game played in Cleveland. With just seconds to go, the Steelers lost the game 26-24 to a field goal. The loss gave the Browns the same 7-3 record in the AFC Central as the Steelers. It made the return game two weeks later in Pittsburgh a decisive contest for the Steeler in their quest for that elusive first division title.

The only previous time the Steelers had played post season football was in 1947 when they tied the Eastern division with the Eagles. They lost the playoff game to decide the division title.

Twenty-five years later it had become their mission to win their first title and the Browns were a solid threat to the Steelers achieving that objective.

The Steelers took to the field facing their rivals with just one aim. Their intent was to smother their opponents. After Andy Russell recovered a fumble on the first series of the game, the signs were looking good for the home team.

Despite starting in good field position, the Steelers were held to a Roy Gerela 36-yard field goal, but they had edged ahead in this crucial contest to keep their 50,000 fans happy.

As both defenses dominated the initial exchanges, Cleveland squandered a chance to tie the game. At the end of the first quarter, they missed a 37-yard field goal wide right.

In the second quarter, the Steelers offense began to move the ball effectively as Frenchy Fuqua and Franco Harris found their feet.  It was Harris who banged in the first touchdown of the game from 1-yard to give the Steelers a 10-0 advantage at the half.

The Steelers defense stifled Browns’ quarterback Mike Phipps sacking him four times while their offense continued to thrive. When Andy Russell recovered a Leroy Kelly fumble midway through the third quarter it was the impetus for another scoring drive. Harris caught a 20-yard pass and ran for nineteen more, the last 11 on a sweep for the touchdown.

As the game entered the final period, Bradshaw fired a pass to rookie tight end John McMakin who pulled it in over his shoulder and ran 78 yards for the touchdown.

Gerela kicked two more field goals from 44 and 37 yards to complete the Steelers dominance on offense while their defense ensured it was mission accomplished.

The Pittsburgh Steelers 30 vs the Cleveland Browns 0

Not only did the win move the Steelers to the top of the division, but it also set several franchise records including for the first time they won all their home games.

The win saw the Steelers tie a franchise record of nine wins which they would extend when closing out the season with two more victories.

Chuck Noll enthused, “I can’t say enough about Franco. He carried us today. Our defense, the line, linebackers and secondary also played a helluva game. Any time you can shut out a team such as the Browns who have an offensive potential, you’ve done a good job.” It was the first shutout the Steelers had enjoyed since 1963

Cleveland Coach Nick Skorich noted that the difference in the game was the Steelers defense got stronger while the Browns offense got weaker.

After waiting twenty-five years since the team previously enjoyed a playoff game, Art Rooney was cautious regarding the Steelers playoff chances. “Of course, if we beat Houston next Sunday and Cincinnati take the Browns, then we’re in. But let’s wait.”

Art Rooney’s reservations were justified as the season went to the wire. They squeezed past the Oilers 9-3 before rolling over the Chargers 24-2 in the season finale.

The 11-3 season ensured the Steelers finished above the 10-4 Browns. They would go on to contest their first playoff game creating the NFL’s greatest play that conceived a legend when Franco Harris snatched a deflected ball inches from the ground. Desperately clutching the ball, his touchdown run sealed the Steelers first playoff victory.

While celebrating the fiftieth anniversary of his Immaculate Reception, Steelers fans have come to appreciate the impact that Franco Harris made on changing the Same Old Steelers into Super Bowl champions.