Long Way To Go, But These Steelers Have Issues 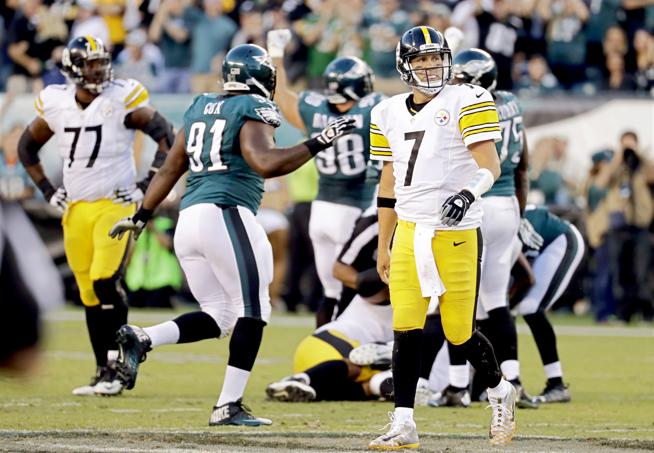 The good news is that the Pittsburgh Steelers likely won’t have to play a regular season game in their new “House of Horrors” for another eight years. Hopefully by then the Steelers will have sought the proper counseling to overcome the nightmares that a game in Philly brings. Until then, it’s time to face some real truths about the issues of this team and you won’t like them any more than they do.

The defense’s “bend don’t break” mentality was broken in half yesterday. Some of that could have been due to injuries to Lawrence Timmons and Ryan Shazier but they were giving up yards in chunks and they were also unable to stop the Eagles on third down as well. We knew when this season began that the pass rush was going to be an issue especially with Bud Dupree out. It’s worse than we expected however.

Had Carson Wentz been wearing a white tuxedo yesterday he would have walked off the field with nary a grass stain. The Eagles’ offensive plan to use the Steelers’ scheme against them wasn’t anything new, but it worked flawlessly. Steelers’ Defensive Coordinator Keith Butler never adjusted to the constant barrage of out routes, quick hitters and moving pockets. With his corners playing off ten yards and unable to tackle, the Eagles took what Butler and the Steelers’ gave. Where was the adjustment? Bring the corners up and if they get beat so be it but at least you force Wentz to read the defense and make more accurate throws.

Offensively, the issues aren’t limited to one or two either.

Remember that this was the unit that was supposed to score 30 points per game? That’s laughable right now and despite Le’Veon Bell returning next week, I’m not sure they’ll reach that number over the next few weeks with top defenses on the horizon. The offensive line, which was thought to be the best in quite some time, is in trouble.

Ramon Foster is hurt. Alejandro Villanueva is not playing well and both Maurkice Pouncey and David DeCastro were frequently over-powered yesterday. Even Marcus Gilbert was beaten and that has rarely happened in the last couple of years. The problems at tight end in my opinion are being downplayed simply because Jesse James and Xavier Grimble had touchdown catches last week. Neither can block and David Johnson was beaten yesterday too which is fairly uncommon for him.

Don’t be fooled by Antonio Brown’s big numbers yesterday either. Many of those came when the game was out of hand. For the second straight week, he was doubled or “bracketed” and with Markus Wheaton dropping everything and no one else stepping up consistently enough that type of coverage will continue.

Ben Roethlisberger has been “OK” to this point. He’s missed some throws and he’d be the first to tell you that but part of the problem is guys aren’t getting open. With the offensive line unable to consistently protect, if Big Ben has to go through his progressions for any length of time he’s going to get hit.

I believe much of what hurt the Steelers yesterday on offense can be repaired and it more than likely will be but defensively, the issues aren’t going away unless Butler and Mike Tomlin are willing to gamble more often.

Yesterday was not a good day for the Steelers’ in any aspect and despite the warm feelings about Bell returning, he won’t be rushing the passer. I don’t think any of us should be heading for a nice high spot on a bridge just yet but there are larger issues with this team than any of us thought. 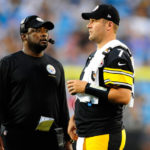 Someone? Please? Tell Me Why Roethlisberger Was Still in There?

That game yesterday was a joke plain and simple. You all wanted a athletic TE cause you felt they needed a big redzone target and a guy who could create mismatches vs the opposing Defense when instead a guy like Heath Miller who you guys took for granted,
and don’t deny that you guys did,
and now he’s gone so now you have a big TE problem that won’t be fixed with Green. You all wanted a Gronk, Eifert or Graham type TE but you all missed the 1 key thing those teams can’t do that the Steelers could: Run the Ball.
Next issue is the Defense. We all know they would be bad but to be this bad speaks more on the players than the coaches. Tomlin has basically thrown the Defense to the wolves and to this point it hasn’t worked.
You all raved about the pick of Artie Burns and through 3 games he hasn’t shown much and please don’t try and defend him cause it won’t work but I’ll make a deal with all who come on this site who either contribute or read or post comments, I will admit that I was wrong about Jarvis Jones if you guys admit that the Steelers taking Artie Burns at No.25 was a bad pick.

Hmmm. Interesting take. I think you might be reading too much into one bad game.
The Steelers ran the ball well the first two weeks: 66 carries for 271 yards, over 4 yards per carry.

But, please, expand upon the thoughts that Green will not contribute anything and that the tight end position is in trouble.
Also, I don’t understand why you feel that after three games Artie Burns is a bust and is unredeemable.
I’m not trying to convince you that you’re wrong. I’m trying to understand what you think and why.