It’s Deja Vu All Over Again With the Steelers 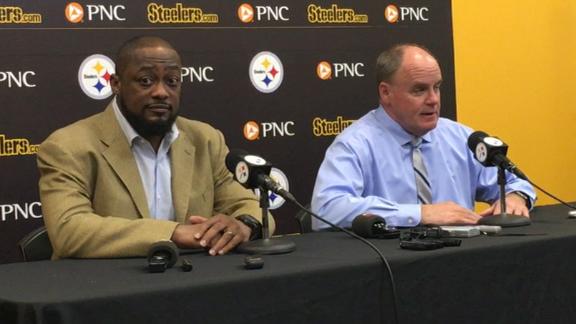 I could swear I’ve seen this movie before.

The Pittsburgh Steelers enter the NFL Draft in desperate need of defensive help. And they spend an early pick on a Big 12 quarterback with big numbers whose major contribution will be holding a clipboard.

Unless Ben Roethlisberger has privately told Kevin Colbert and Mike Tomlin that his plan to play three more years is no longer accurate then the selection of Mason Rudolph makes zero sense. Last we saw the Pittsburgh Steelers they were getting run over, run through and run around by the Jacksonville Jaguars. The easy thing to do was blame that on the absence of Ryan Shazier so let’s go with that.

The Steelers signed Jon Bostic in the offseason who will likely serve as Shazier’s replacement in 2018. Bostic is a solid veteran who tackles well, is good against the run and is a strong, on-field general. But Bostic also has a history of injuries and does not cover well in pass coverage. While Tyler Matakevich is a fine Special Teams’ player, he has not proven to be even so much as serviceable if forced into long-term duty at linebacker.

Seems pretty logical to me that you address this in the Draft right? So far that answer is “wrong.”

When Friday’s coverage of the Draft ended, we recorded the Steel City Blitz Podcast to cover what went down. Therefore, I’ve yet to see what Kevin Colbert had to say. I’m willing to bet phrases like “good value” and “highest rated player on our board” were used to describe the selection of Rudolph. I do not deny that getting him in the 3rd is indeed good value but unless I missed something, can he tackle?

The Steelers were in a very similar spot in 2013 when they wasted a fourth round pick on Landry Jones at a time when their secondary desperately needed help. A sack of potatoes would have been decent pick for our secondary there but the choice of Jones once again completely ignored a glaring need.

Sometimes you have to go for ‘need’ over what the draft board says. I have no doubt they had Rudolph as the highest-rated player on their board at that time and they stuck to what they almost always have done. But did they not have any linebackers at least in the general vicinity of Rudolph?

I understand the screams about “needing Ben’s replacement.” I lived the through the post-Terry Bradshaw years and ya, they sucked for the most part. But those teams were vastly different than this one. The current Steelers are Super Bowl worthy but they’ve addressed a position that most likely won’t even play for 2-3 years. That doesn’t help this team now.

Pittsburgh now has four quarterbacks and you sure aren’t putting a third round pick on the Practice Squad. This means either Landry Jones or Josh Dobbs is not going to be on this roster in September. In either case (but especially Dobbs’) these were wasted picks.

Like I said, I get what is going on here but I don’t agree with it. Right or wrong I’m entitled to my opinion as you are yours. I’ll be more than happy to be proven wrong down the road but I’ve seen this movie before and I know how it ends.

Just because Ben says he,wants to play 3 more years doesn’t mean he’ll be able too at the same level plus he’s been saying he needs to reevaluate year to year.
Getting Rudolph in the 3rd when most worried they were taking him in rd 1 because of the 5th year option is VALUE.
No Rudolph can’t tackle but he can possible be the future face of this franchise and they drafted his Wr in the same round. Sounds like they focused on now and the future with these picks and I’m ok with the draft so far only questioning the o line selection.

All of this is true Rob but I think fans are getting way too ahead of themselves. We went through a lot of QBs who were supposed to be Bradshaw’s heir apparent too and how long did that take? I understand the value and the choice but I don’t think it does anything for us in the short term.

I really believe this draft class is all about the future. Who in this class is better than what we have right now. What i do like is that all these guys have high ceilings, just not in 2018. Washington may play some. I can see why we didn’t draft an ILB, quite frankly this class was real thin and the Steelers don’t draft out of desperation . We will need to be patient with this group for sure.

True it doesn’t help in the sjort term but The general manager said he looks short term and future. He may or May not be the future but I’m glad we got him in the 3rd. People alway complain about Landry Jones then they hated the Dobbs pick,now don’t like taking a QB every thought was going in the 1st early 2nd but got in the 3rd.
Their wasn’t a Lb that they felt comfortable with so they double dipped at Safety and I’m excited to see what Coach Bradley does with them.