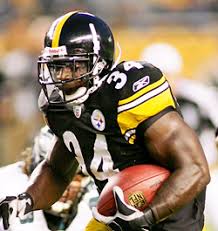 I have to say I was really surprised by the number of people recently who have told me they think bringing Rashard Mendenhall back would either be a good idea or at the very least remain an option. My most recent article was about the serious trouble the Steelers’ offense is in heading into 2013 and running back is obviously a big part of that problem.

If you heard General Manager Kevin Colbert’s end of the season comments then you know he certainly has no designs on bring Mendy back to Pittsburgh. It was crystal clear to me that the organization did not like his missing the San Diego game one bit and they didn’t care for his nonchalant attitude afterwards either. People have certainly been known to change their minds, but I just don’t see Mendenhall back in the Steel City unless he is wearing another team’s uniform.

Few players have been as polarizing as Mendy over his time with the Steelers for both his on field actions as well as his off. Besides completely skipping a game, he also made those controversial comments after the death of Osama bin Laden which weren’t received very well within the Steelers’ Nation.

While off-field issues are certainly to be weighed, my issue has always been his inconsistency as a running back. Mendenhall has shown many flashes of brilliance with good, hard runs and sprints to the end zone from time to time but indecisiveness and ‘dancing in the hole’ was enough to make most Steelers’ fans tear their Terrible Towels in half.

To be fair, Mendenhall has never really had a healthy or consistent offensive line in front of him and I don’t believe his abilities as a pass catcher were ever featured enough either but do the positives outweigh the negatives in terms of re-signing him?

I say ‘no’ for two reasons. One, as consistent as the Pittsburgh Steelers’ organization is, I believe sometimes change is necessary and I believe some new legs in the backfield are a vital part of that change. It’s a great time to get someone with a little more passion and fire running the ball.

Secondly, I’m not real sure Rahsard Mendenhall is 100% dedicated to the game of football. I’m a firm believer in being well-rounded and having numerous interests in life, but I see a lot of ‘Ricky Williams’ in Mendenhall. As unsteady as this team looks heading into 2013, having a guy not focused on the game doesn’t sit well with me.

My friends, colleagues, and fans all have opinions on this and they vary greatly. This is the season for such things however. The letting of go of Mendenhall may not sit well with everyone, but I think it’s the right move.

Ward Will Not Be the Steelers’ New WR Coach