Impact of Joey Porter Needs to Be Tempered 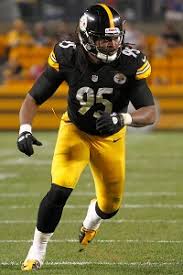 I’m just as excited as everyone else is that former Steelers’ linebacker Joey Porter is back with the organization but let’s slow down a bit.

He has been hired to be a defensive assistant and his immediate responsibilities have not been made fully clear yet, but I think we can assume he’ll be working with the linebackers.

I saw a lot of comments yesterday about the fact that Porter is being brought in to turn Jarvis Jones into a ‘Joey Porter-like’ linebacker who will stalk opponents from his half of the field during pregame.

While I see the thought process here, I think it’s a bit misguided.

There’s no question that Porter will ramp up the intensity of the defense and that he’ll work closely with Jones but I don’t think you’ll see the mild-mannered 2nd year man from Georgia become something that he is not.

Porter’s greatest benefit to Jones will be in teaching technique and diagnosing plays quicker. The talent that Jarvis Jones possesses can’t be argued. He can make plays, but he can make more of them with proper teaching.

This isn’t a knock on linebackers’ coach Keith Butler at all. I believe the Steelers see an opportunity for Jones to put on some weight, retain his speed and learn from one of the better outside backers to play in Dick LeBeau’s defense.

Many feel that Jones is too laid back and is too mild-mannered to be an aggressive, top-flight outside linebacker but I would argue that the whole defense has become this way if you think about it.

This is why I believe we need to slow down on the “Porter will turn Jones into a beast” talk. I’m just as interested with what Porter can do for the whole defensive attitude as I am with just Jarvis Jones.

Did Steelers’ GM Kevin Colbert Say Too Much?