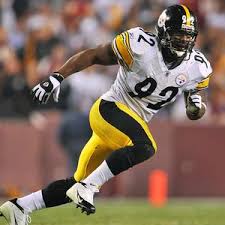 There is simply no question that one of the hardest things for fans to do in this era of free agency in professional sports is move on and let go. Failing to understand the business side of pro football in this case is part of it as is basic loyalty to an individual player.

In the case of former, yes I said former, Pittsburgh Steelers’ linebacker James Harrison, the is still much attention paid but maybe it is he who needs to move on. In the weeks following his release he has been rumored to be a target of the Baltimore Ravens and more recently the Cincinnati Bengals. According to most reports, Harrison was very close to signing with the Bengals but the sides have since drifted apart and Harrison once again finds himself adrift in the sea of free agency.

Fact is that Harrison had an opportunity to stay with the Steelers at what I would consider a pretty healthy sum of money. Yes, a 30% cut in salary is tough for anyone but when you’re already making over $6 million dollars I think you can suck it up a little. The Steelers were also willing to make his losses up in terms of performance-based initiatives.

The only one to blame for Harrison’s current position is Harrison himself. I have no problem with veteran players who want to keep playing the game even into their mid-to-late thirties because it really is all they know. I never bemoaned Brett Favre for his back and forth ways and won’t do it with any other player either.

If rumors are accurate that Harrison “hates the Steelers” then shame on him. They gave him opportunities when no other team in the league would and again gave him a chance to make good money even with a pay cut.

While fans need to get over seeing Harrison in another uniform, Harrison must also get over what he must feel is ‘unfair treatment’ by the Steelers’ organization. He’s 35 and has a lot of mileage on his body and those miles don’t come off regardless of how much acupuncture you receive in a week.

James Harrison authored some great moments in the black ‘n gold and we as fans should not forget that. When and if he ever re-appears on the turf at Heinz Field in a uniform not of the Steelers, I will not boo and hiss at him. I will cheer him as a guy who gave an awful lot of himself to bring two more Lombardi Trophies to Pittsburgh.

Unfortunately, it is appearing that Harrison is going to be another in a long line of ‘former’ players who bash their former organization for no other reason than their own greed.

Harrison Made His Bed With Steelers was last modified: April 17th, 2013 by steeldad
James HarrisonNFLPittsburgh Steelers

With McLendon Visiting Green Bay, Just What is Going on in Pittsburgh?

Antonio Brown Confirms What Many of Us...

To be sure, Harrison will always be one of my favorite Steelers for the way he played the game. Who can forget one of the greatest plays in super bowl history as well. However; if he has any animosity in him, it should be directed at his agent, or look in the mirror, a 30% cut from his salary still leaves him at a little over 4 million for 2013, sometimes guys get used to not really thinking things out from both points of view, my guess is he is graded out at vet minimum by the rest of the league.

I agree with the post above……a classic case of one biting the hand that fed him (and fed him well). They offered him much more than anyone is willing to offer him as well. Also although they wanted to cut his salary, (and 30% cut considering what the rest of the league is willing to pay him (if anything) is generous. From what I read they offered to give him back most of his salary via incentives anyway.

If he bad mouthed the Steelers saying that he hated them then shame on him !!! The only thing that I bemoan the Steelers about is that they slammed the door (a couple of weeks ago) by stating that they were definitely not interested in bringing him back. …..not a good move either.

The all move on and that’s what’s suppose to happen. I will admit that It’s going to hurt next year when it’s Troy’s time to go based on age,pay & production. However I got over The Bus taking a paycut to stay & retire, I got over cutting Joey P, I’m over Harrison, waiting on Foote,Ike,Clark and will also get over Troy P.

Hey…it’s is Cincy management that is saying that Harrison “hates the steelers”….it’s not a quote from James Harrison himself. I’ll always remember his greeat days….that long right arm crashing down on an opposing QB’s throwing arm….causing yet another turnover for the Steelers….the greatest play ever in a Super Bowl in my opinion. The guy was a classic Pittsburgh player…nothing but raw, blue collar guts. Good luck wherever you go James….stay out of trouble and enjoy what you’ve earned.

Troy P. will be in black and gold for a few more years if he stays healthy the next two years he won’t be going anywhere. He’s only 32 Harrison is 35 and Troy will retire a Steeler. Harrison screwed himself or you can say it was his agent who screwed it up for him.

PLEASE! James Harrison has never been quoted saying anything bashing the Steelers. A player for the Bengals was giving HIS opinion on how HE thought James Harrison felt. And now everyone just keeps repeating the original mistake trying to create something that is simply not there. It is a shame that there is not more responsibility and intelligence in these types of reports.

You need to apologize and then get back to us when you can quote James Harrison directly.

Thanks for reading James. You’ll note in the article that I said “if rumors are true that he said he hates the Steelers.” The only guy I’ve heard this from was a Bengals’ player and I did not attribute the quote to Harrison so I have no one to apologize to. Regardless of what Harrison said, he is in this situation because of one of two things; his agent coerced him into thinking he could get more elsewhere or James believed he could. Either way he was wrong and has only himself to blame.

You know what you did. (And so does anyone else reading this) What you just wrote in your reply to me could have just as easily been written in your article instead of “if rumors are accurate.” The only difference is you lose some of the sensationalism. And I am not countering the point that Harrison has only himself and/or his agent to blame. (Although there was no business sense in the Steelers publicly closing the door on his return) The truth of his situation is self-evident and need not be embellished.

And why the use of apostrophes (‘) when writing “unfair treatment?” Are you half-quoting someone ar just trying to make it appear as if Harrison said it? If you are simply stating YOUR opinion, more clarity and accuracy would be obtained without them.

James, I write what I think and base it on what I see, read and hear. That doesn’t make it right every time or wrong every time. I have been a James Harrison supporter throughout his career and have vigorously defended him against the tyranny of Goodell. With that said, I’m not an English professor so I may use quotations when not necessary. If my use of punctuation offended you, please accept my apologies.

You keep bringing in ancillary issues that are irrelevant to my original post. Supporting James Harrison, defending him, Roger Goodell, who is at fault for his situation, etc. (I particularly liked the diversion of “If my use of punctuation offended you, please accept my apologies.” That’s pretty funny stuff!) What offends my sensibilities is the blatant mischaracterization of the reality of Harrison’s situation in an attempt to promulgate more drama than what is truly there. Obviously, that was your intention.

Jim, thank you visiting our blog. I appreciate your comments and will use them to better myself as a writer. I’m sorry that I did not more clearly state my intended position on Mr. Harrison.

You can’t believe everything you read or hear , when you here it come from his mouth then post these wrong things on the man.

I apologize for having inaccurate numbers per the PPG because we all know they are always deadly accurate…. Bottom line is he could have stayed and still made more money than what he is more than likely being offered.