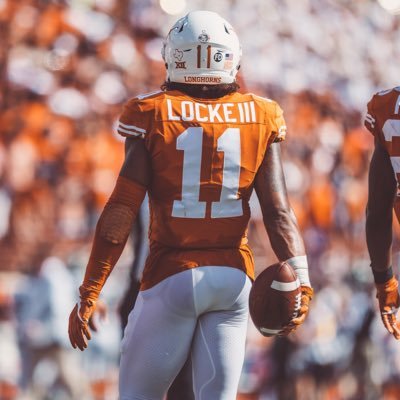 The Pittsburgh Steelers recently brought in a four-year defensive back out of the University of Texas by the name of P.J. Locke. With his introduction to the team largely coming via a swift announcement on Twitter, followed by a clip of one of Locke’s smashing hits, he appears to be going down a storm in the Steel City. On top of that, many are tipping him to have an even greater impact on the team this season than that of some of the later round selections in this NFL Draft. With all of that in mind, I aim to provide everything you need to know about our newest safety.

– Full name: James “PJ” Locke III.
– Played in 47 games, of which he started 31.
– Team captain as of his Junior Year.
– All-State performer in his Senior year of high school.
– All-Big-12 Honourable Mention in 2018.
– Avid gamer and gym addict according to texassports.com.
– Majored in Applied Movement Science.
– Father played football for the University of Oklahoma before becoming a constable.

Evidently, with more playing time in his Senior campaign, Locke’s impact on the Longhorns’ roster was felt heavily. His productivity reflects that of a worthy candidate to be drafted in honesty, particularly the numbers he registered in 2018.

One of the most impressive aspects of Locke’s game is his aggression. While he doesn’t go over the top, he demonstrates an unrivaled will to make a play on every down, which is an absolute joy to watch. Despite his slightly slender frame, Locke is a hard-hitter and plays a style of football similar to that of Ryan Clark. Who, incidentally, also followed a similar career path to that of Locke. In addition, to his heart, Locke combines a hefty motor to his frame which allows him to be effective over the game’s totality.

Another large positive in Locke’s game is his versatility. He filled in at several different defensive positions for the Longhorns, ranging from either safety to nickelback, with the latter position being where he was used frequently. Aside from that, Locke is clearly a natural born leader, someone who his team looks up to, as evidenced by his two-year tenure as team captain.

Finally, his athletic capability. Locke’s a stand-up athlete, who boasts both size and speed which work in coercion perfectly. Furthermore, he has shown an ability to pull-off acrobatic plays, which only speak volume to his skill further.

First of all, a large concern surrounds his statistical production. As displayed above, Locke produced fairly minimally in his first two collegiate campaigns, whilst his Junior season was derailed due to injury. With that being said however, when he was given the opportunity to start he truly grasped a hold of those chances, as he greatly improved his statistical production in his final year in Texas.

Another concern I have of Locke is his ability to successfully conclude the tackle. He has yet to develop a formula that produces consistently solid results in his tackling technique, which is depicted by the fact that he can overcompensate on occasion, whilst he often fails to wrap up the ball carrier.

P.J. Locke may have been the Steelers’ last undrafted free agent acquisition, but he is certainly not the least important.

It’s a largely well-known fact that as an organization the Steelers often fail to retain and improve UDFA talents, which is something that needs to change, hopefully starting with Locke. For me, he is such a versatile talent who possesses solid football IQ, sound athletic ability and the heart, determination and will to win that not every prospect boasts.

As he continues to establish himself in Pittsburgh, we at Steel City Blitz are more than certainly rooting for him to make the 53-man roster this forthcoming season.