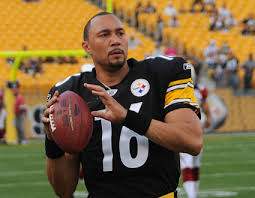 If you saw the moment immediately after Shaun Suisham’s field goal attempt sailed through the uprights to give Pittsburgh a huge win over Baltimore then you know what I’m talking about. Franchise quarterback Ben Roethlisberger shared an embrace with his back-up Charlie Batch for what seemed like hours. Amongst the heap of towels and stocking caps and winter coats, the two men stayed locked until others finally jumped in making it a group hug.

Batch had just engineered a game-winning drive and in the process brought the Steelers back from a ten-point deficit ending the Ravens’ home winning streak at 15. The reaction by Batch was one he could hardly be blamed for and was a long time in coming.

Last week, Batch struggled in the team’s atrocious loss to Cleveland and he struggled at times tonight too missing wide-open receivers and hanging on to the ball often way too long. The wily veteran overcame some suspect play-calling and another uninspired performance by the running attack to get the Steelers a monstrous 23-20 win.

There were times when Batch made throws that made you wonder if he hadn’t forgotten his bi-focals and then there were throws that were made with such accuracy that he would have made world-class archers jealous. But then again, that’s Charlie Batch. He’s never been spectacular and he was certainly never going to be mistaken with ‘elite’ NFL quarterbacks but Batch proved his worth tonight.

In a game where his teammates like Emmanuel Sanders and Antonio Brown were literally handing turnovers to the Ravens, Batch weathered the storm. The defense was solid but had moments of trepidation with Ike Taylor gone for the entire game and Ray Rice breaking tackles moreso than he did two weeks ago. Still the defense came up with big plays and Batch was able to take advantage.

The hometown boy has and will always have his detractors but for one night he was able to put the clipboard down and look like an NFL Quarterback again. The feeling Batch had when the game was won was not lost on Roethlisberger who knows how hard it must be for Batch to have been his de-facto QB coach all these years.

If the Pittsburgh Steelers get hot and make a run to the Super Bowl, it will have started here with a career back-up beating the Baltimore Ravens against seemingly insurmountable odds. For all the mistakes and the bad throws and the drops and poor reads, Batch’s potentially last start finished a winner and whether you like it or not, he deserved it.