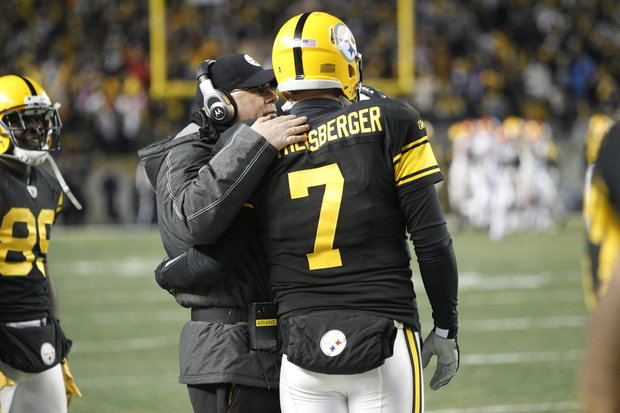 I started typing out a long comment on SteelDad’s post on Bruce Arians and decided to make it a counter piece. Our aim at Steel City Blitz is to gather information, as it becomes available to us from a number of avenues, analyze what we see and offer opinions based on that analysis. Alas, just like many Steelers fans, we do not always agree.

Many Steelers fans seemingly have a gripe with the fact that Arians was fired. I am not one of them.  Apparently, he does though. I don’t buy his “… time heals things“ statement. If he was “healed” he would not have felt the need to go on national TV and talk about it. A handful of beat writers In Pittsburgh have acknowledged, sometimes publicly, that Bruce rubbed people the wrong way during his time in Pittsburgh. Stirring up drama like this is just one example.

I was of the opinion that Arians played fast and loose at times on critical downs. When Bruce would trot out 4 or 5 wides on 3rd and 2, many times without a hot route, I would lose my mind.

Ben also played “John Wayne” too much under Arians and yes, they seemed too close for Ben’s own good. Ben seemingly did whatever he wanted under Arians, rather than just taking what was available to convert a set of downs. Many people came to the conclusion that Bruce was coaching Ben with a softer touch than he needed. It was because Ben would throw caution to the  wind over and over in BA’s offense. The perception was that Ben did not face any consequences under Arians for holding the ball as long as he did and ignoring underneath routes.

Ben even went the self deprecating route once and admitted that Arians had once thrown a water bottle at him in a film review meeting for ignoring an open receiver and that they had arguments, while always in private. He did so in an effort to defend his mentor after his forced retirement. I don’t believe that statement did much to change the perception about their relationship. Ben had done the same things for too long and his style of play “needed to be tweeked”, as Art Rooney put it.

Players are people and personalities among teammates vary just as they do within your own group of friends. Different players need to be coached in different ways. What Ben needed was someone to reign him in and then give him more autonomy, after he adapted to that new set of rules. He got that under Todd Haley. I’m not a huge fan of Haley’s, but on this one point he has done things exactly right. Ben is playing the best football of his career. I don’t believe that he would have progressed to this point under Arians.

Is that Bruce’s fault? No. It was Ben’s. But, nothing was going to change under Bruce Arians and as Ben goes, the Steelers go. And so, it was time for Arians….. to go.

I’m not sure why Bruce would bring it up anyway. He’s gone one to be a pretty good head coach and his former pupil is playing lights out football. Everyone has benefited by the change. It was an across the board win-win, unless your name is Kirby Wilson.

Incidentally, Bruce’s point about the Steelers not running the ball enough getting him fired is misplaced. They run it even less now.

Pittsburgh was better than average converting a new set of downs, slightly below average turning the ball over and atrocious when it came to protecting the QB on 3rd down. The Steelers gave up 106 sacks on 3rd downs over that period. The worst in the NFL by a good margin. That issue had a great deal to do with Arians losing his job, in my opinion.

They won despite their offense. But wait,… they also had an historically good defense that season that seemingly made a tide turning play in the 4th quarter every time the team needed them to in order to be able to win!

That leads me to my counter point to Marc’s, “In the four years since Arians was fired the Steelers have just one playoff win.”

The lack of playoff success since 2010 has more to do with a generational defense that aged out and a front office that drafted poorly in 2008 and 2009 than anything else. The offense, and Ben Roethlisberger in particular, are better today than they ever were under Bruce. 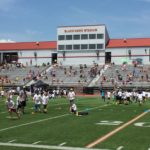 Ben Roethlisberger’s Camp a Huge Success for the Kids and Me!

I totally agree, The key to this seasons success is will this defense stay healthy and grow up fast. We really need someone to step up and show something more than we thought they could, Maybe a Golden, Dupree or Burns. The bulls there to grab someone just has to take advantage when opportunity calls. BTW i read an article on ESPN where Jake Long is healthy and available, it doesn’t hurt to take a peek.

The two guys I have highest hopes for this year are Davis & Hargrave.
I believe that Dupree will take another step though and am hopeful that Ryan Shazier can stay healthy.
The things that concern me are the inexperienced D backfield and Burns probably not being a huge contributor this season. He is a world class athlete, he’s long and he has ball skills. But his cover skills are raw. Tomlin and Colbert seem to have a preference for these kind of athletes when picking late in the first round though. They like to “get them for their senior year”.
You could say that they value athletic potential over being pro ready when they pick late and it seems like in most years they pick later than 20.

He didn’t deserve it then – he was just collateral damage in a situation that needed a shakeup.

But he deserves it now, retroactively, for being so relentlessly unprofessional about it.

He deserved it, Copa. I think people forget how often the record setting pace Ben was getting hit at was discussed in the media and by Art, in particular. He appealed to both Ben directly and to Arians to change the way the QB was being utilized.
Something had to change. The organization had a huge investment in a position where talent in not at all fungible and an OC, who while quite innovative, was also replaceable.
Bruce should have seen it coming. The fact that he did not speaks to his arrogance and myopia.