The Blitz is back on the black n gold airwaves as Marc and Matt talk all things Steelers preseason. Topics include the Doobie Brothers aka Bong Brothers aka Le’Veon Bell and LeGarrette Blount. Was Tomlin right in playing these guys and the rest of the starters so long in week 3 of the preseason? We also discuss the player cuts made on 8/26, and some of the roster battles still to work themselves out in the next 2 weeks before the NFL regular season gets under way.

Be sure and follow us on Twitter and check out www.SteelCityBlitz.com for Steelers coverage that caters to hard core fans who want real, unbiased talk about our beloved black n gold. 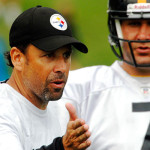 hey guys love your show. I am the President of a Steeler fan club and we have had a website for ,many years. This year we are revamping the site into more of a blog type site where people can be interactive. It is a work in progress. I have added your podcast to our section of Podcast /Media. If you have a list of sites if you could add us that would be great. Also i have 5 writers doing articles for me right now. I am always looking for new writers to do articles. Would love to get a couple writers actually in the Burgh to get us the inside scoop. We are down here in Virginia. Let me know if your interested

I’ll have the site owner contact you at the email you provided. Thanks for the link back, we appreciate it. We’ll be in touch soon.