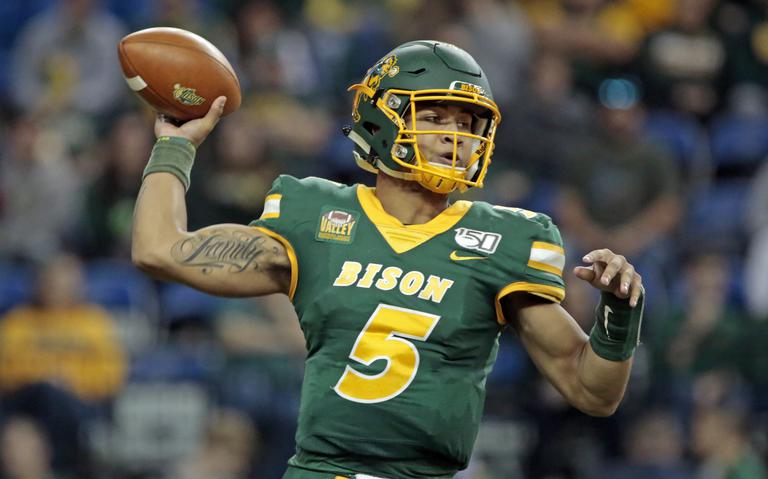 Bleacher Report’s Matt Miller sparked a lot of conversation yesterday when he dropped his first 2021 mock draft in which he had Redshirt Sophomore to be, Trey Lance, slotted higher than Justin Fields. People were outraged by this after watching Fields take the college football world by storm last season where he was a miscommunication away on the final drive of the season from potentially knocking off Trevor Lawrence and the Clemson Tigers in the College Football Playoffs. The last couple months, several compilations of Lance’s highlights had popped up on my twitter feed and each time, I grew more and more intrigued by what the redshirt freshman could do. I couldn’t wait any longer to check out his tape and after watching about half of his games from last season, I came away extremely impressed almost to the point of disbelief. How does a kid this talented end up as a 3 star recruit playing ball at North Dakota State? That’s not intended to be disrespectful at all to that program, by the way. They are a powerhouse in their own right, having won 8 FCS National Championships since 2011. The program has also produced multiple NFL Quarterbacks this decade with the most notable being Carson Wentz, who was selected second overall by the Philadelphia Eagles back in 2016. The tape from Lance’s redshirt freshman season shows a 20 year old kid that has all of the tools to potentially be one of the first QBs off the board in the 2021 NFL Draft.

First thing that really flashes on tape is his arm talent, he possesses an NFL caliber arm capable of making every throw asked of him.  Displays good arm strength. The ball really pops off of his hands with ease, sideline throws from the opposite hash always seem to get to the spot in plenty of time. Has a compact throwing motion that features a quick trigger and solid overall mechanics. When he needs to put some extra heat on the ball, he has the arm strength to do so even when the pocket collapsing around him.

Lance has more pitches in his arsenal than just a fastball, the touch on his changeup is fantastic. He understands when to zip the ball in there and when to take a little off of the ball in certain situations. For a player without a lot of game experience, love his confidence to throw overtop overhand defenders. His overall accuracy does not suffer on touch throws which is a positive sign for his progress as a passer moving forward.

The deep ball accuracy is the most exciting aspect of his passing repertoire at the moment. Lance throws a gorgeous deep ball that more often than not, leads guys into big plays down the field. If he misses, it’s usually in a spot where the defender doesn’t have a shot to pick it off which makes sense when you check out his TD/INT ratio of 28:0. Even some of his incompletions, where guys couldn’t get their feet in along the sideline, are impressive shots into tight windows.

NDSU utilizes Lance’s athletic ability frequently in the run games as he ran for 1,100 yards and 14 touchdowns last year. Not only does Lance have good straight-line speed but he’s possesses a strong lower half to break through arm tackles. There are instances in the red zone where he’ll just lower the boom on smaller defensive backs on the way to the end zone. In the National Championship game last year, Lance toted the rock 30 times for 166 yards and a touchdown on the way to beating James Madison.

One thing that Lance has in his favor as a prospect, is that he operates in a varied system which is a mixture of spread formations and classic power football. At the next level, it wont take a complete overhaul of an offensive system for Lance to feel at home. Shows a level of comfortability under center where he has shown to be deadly in the play action passing game. Something that NFL clubs will be very eager to put to good use. NDSU’s offense utilizes RPOS, zone reads, flood concepts and plenty of pro passing game concepts which should make his transition to the next level easier.

The jaw-dropping throws are certainly what has caught a lot of folks attention, which is expected. However, I think he’s much more polished than some are making him out to be. Not saying he’s anything close to a finished product by any means but definitely not a raw passer operating solely off ability. There were plenty of instances on tape where he would go through multiple progressions from one side of the field to the next. As the year went on last year, he gained more and more of an understanding of how to manipulate defenders using his eyes.

His backyard style of play is really entertaining to watch. Will break tackles in the backfield and immediately get his head up downfield to look for a big play. If nothing is there, he will take off and get whatever he can with his legs. His off script plays that turn a negative play into positive play add immense value to an offense. Some reps where he looks dead in the water but then offers up a kill shot to the defense, expert at those “back-breaking” types of plays that really kill the opposing teams spirit. Plays like this were important for me to get a look at because of how often he has a clean pocket, I was wondering if he was capable of making plays down the field under less than ideal circumstances. He checked that box.

Throws extremely well on the run particularly when moving to his right. Put some really impressive comeback routes on tape where the ball placement was perfect despite tight coverage on the outside. Play action roll-outs are something that he really specializes in, footwork and mechanics don’t falter when he’s on the move. Can utilize him on naked bootlegs due to his elusiveness when he gets matched up 1 on 1 with defenders.

Will throw with anticipation especially towards the sideline. Throws outs and comebacks before or right as the receiver is at the break point. This is an area where I think we will see him progress more in his sophomore season, too. Would like to see a little more of these anticipatory throws over the middle, intermediate parts of the field. But he’s already shown he understands the concepts and has some upside in this area once he continues to gain game experience.

In closing, there are things that he can certainly improve on- his overall play to play consistency could be a bit better but this is something that you expect from a freshman who’s only 20 years of age. He’s already a strong kid but he could stand to put on 5-10 pounds for extra protection from all of the hits that he absorbs both as a passer and a runner. Felt like there were times where he escaped the pocket when prematurely when the pass protection was holding up adequately. Lastly, I’m really just looking for continual growth as a passer in all the areas listed above that I talked about. Some will worry about the talent level that he faces but at this point, that is out of his control. He’s playing at a great school, in a pro offense and dominating the competition- what else can you really ask of him? Some will be unable to get past that, that’s their loss.

The goal of this article wasn’t to convince people that Trey Lance will/should go ahead of the more popular names, Justin Fields or Trevor Lawrence, in next years NFL Draft. That is, if he even decides to declare. The goal was explaining why he absolutely belongs in that first round, top QB conversation. He should be someone that everyone keeps a close eye on throughout next years college football season because he’s on NFL teams radars already. Lance has shown to be ridiculously talented at such a young age and has all of the tools to be a really special player. Given what he’s already shown the world in his first year as a college QB, we could be in for a special 2020 season. Believe the hype on Trey Lance.

Good work DB. Chances Lance can leap Lawrence for the top spot? Who’s the fourth guy in this class that plays the Jordan Love role in the mid-late first?

I’m not sure anyone could unseat Lawrence next year, really. But we will see. I’m skeptical that there will also be certain old school GMs that would not be in favor on a non D-1 QB going that high.

As for a mid 1st round QB, keep an eye on Jamie Newman. Transferred from Wake, going to be at Georgia next year. Mobile guy that flashed some interesting traits last year.