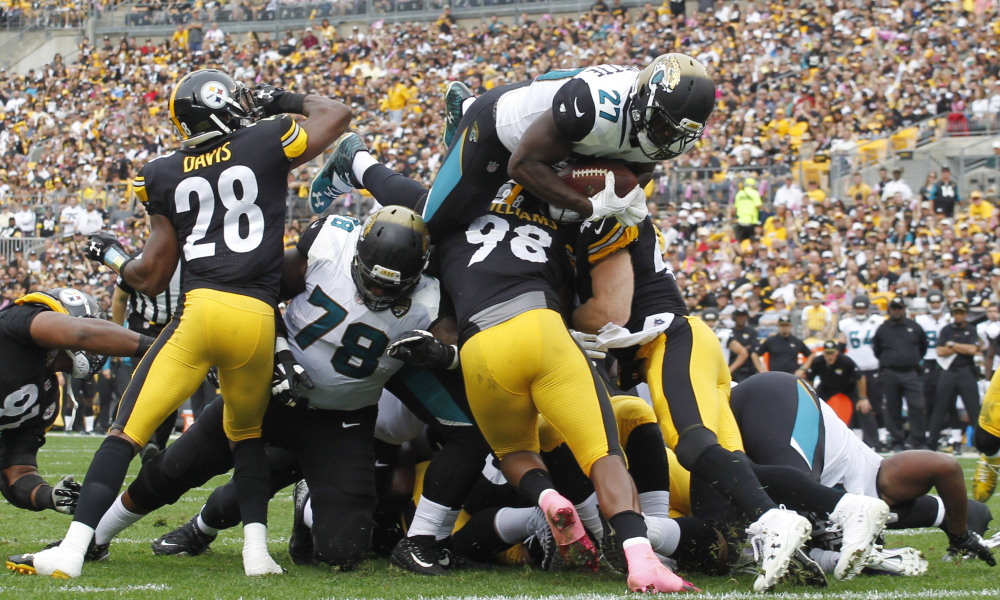 The Steelers and Jaguars meet for the second time this season in the Divisional Round of the AFC Playoffs. This will be the second playoff meeting between the two squads. Their last meeting in 2007 was the only time in history that the Steelers have lost to the same opponent twice at home in the same season. The Steelers are well-rested coming off the bye week, especially after resting many of their starters in Week 17 against the Browns. Here is a look at five key stats to know heading into the Divisional game.

After the Jaguars entered the league in 1995, they quickly established a bitter rivalry with the Steelers. The late 90s featured some hard-fought games between the two squads. The Jaguars actually hold the all-time lead at 13-11 in the series and are 1-0 in playoff meetings. That loss came at the conclusion of Mike Tomlin’s rookie year as head coach, with the Jaguars knocking the Steelers out in the Wild Card round. Tomlin’s teams are 3-3 against Jacksonville and had a 3-game winning streak until the 30-9 debacle earlier this season. Interestingly enough, the Steelers have only broken the 30-point mark once against Jacksonville and have been held under 10 points in 7 of their 13 losses to the Jaguars. This is a Steelers team loaded with playoff experience while the Jaguars are making their first playoff appearance since 2007. The Steelers are 3-3 in the playoffs over the last three seasons while the Jaguars are 2-2 in the playoffs this century.

For the fourth straight year, the Steelers will open the playoffs against a team that beat them during the regular season. This year’s game against Jacksonville was a total disaster with Ben throwing 5 interceptions (2 of them run back for touchdowns) and Leonard Fournette rumbling for 90 yards to end the game. Last year, the Steelers opened the playoffs against a Miami team that had run all over them to the tune of a 30-15 victory in Week 6. The Steelers got their revenge with a 30-12 thrashing of the Fins in the playoffs. In 2015, the Steelers opened the playoffs in Cincinnati and won 18-16 when the Bengals bungled the game away with last-minute penalties. Earlier in the year, the Bengals had defeated the Steelers 16-10 in Week 8. In 2014, the Steelers won the division title and faced the Ravens in the Wild Card round and lost 30-17. Baltimore had previously beaten the Steelers 26-6 in Week 2. On top of that, the Steelers have the ghosts of Mike Tomlin’s first season to overcome. That year, the Jaguars were a run-heavy team with Fred Taylor and Maurice Jones-Drew that were built to come north in the winter and win. They did just that in the Wild Card round, knocking off the Steelers 31-29 on a Josh Scobee field goal after they converted a 4th and 2 with QB David Garrard scrambling for a first down thanks to about 15 holding penalties.

The magic number for both teams this season has been 17 points. For the Jaguars, this number has come from their defense. Astoundingly, Jacksonville has held their opponent to 17 points or fewer 11 times this season. The Jaguars won 10 of those games with their only loss coming in Week 17 against Tennessee when the Titans won 15-10. In games which the Jaguars defense allowed 18 or more points, they were just 1-5 with the only win coming in Seattle by a 30-24 margin. On the flip side, the number 17 is significant for the Steelers offense. The Steelers are 0-2 when scoring 17 or fewer points this season and 13-1 when they score at least 18 points. The Steelers only loss when scoring more than 17 points this season was the 27-24 loss to the Patriots. In the matchup of the Steelers offense against the Jaguars defense, it is imperative that the Steelers put at least 18 points on the board.

The Jaguars made a lot of noise this season with their pass rush. They dubbed the “Sacksonville” moniker en route to ringing up 55 sacks on the season. However, the Jaguars did not lead the league in sacks. The team that did was the Pittsburgh Steelers who finished with 56 sacks. The Jaguars have been able to generate a rush primarily with their 4 down linemen this season. Calais Campbell has been an absolute force playing both outside as a 4-3 DE and situationally on the inside. Campbell led the team with 14.5 sacks and DE Yannick Ngakoue was second with 12.0. Interior lineman Malik Jackson and backup defensive end Dante Fowler both finished with 8.0 sacks. Beyond those four, the Jaguars will bring occasional pressure but no one had more than 2.0 sacks. For the Steelers, most of their pass rush came from the middle. Cam Heyward earned an All Pro nod as an interior lineman after racking up 12.0 sacks from a 3-4 DE position. Inside linebacker Vince Williams became a stud on delayed blitzes where he was able to blow up running backs to the tune of 8.0 sacks. Outside linebackers TJ Watt (7.0 sacks) and Bud Dupree (6.0 sacks) also contributed significantly. While the Jaguars only had 4 players with more than 2.0 sacks, the Steelers had 8 – showing that the Steelers can dial up pressure from different places (such as Mike Hilton’s 4.0 sacks from the slot corner position). Both teams recorded 2 sacks in the first meeting, but pressure by the Jaguars directly caused 2 of Ben’s interceptions.

It is no secret that the Jaguars want to run the football. During the preseason head coach Doug Marrone said he would “run the ball every down if he could.” The Jaguars followed that up by posting the top-ranked rushing offense in the league, led by rookie Leonard Fournette’s 1040 yards and 9 TDs. Chris Ivory accounted for 382 yards in a supporting role and Blake Bortles added 322 yards. In their playoff game against the Bills, it was Bortles’ running ability that changed the game for the Jaguars. The Steelers defense has struggled against the run since Ryan Shazier went down against Cincinnati, allowing over 100 yards to 4 of their last 5 opponents. The Jaguars also use their backs in the passing game as Fournette had 36 receptions and third down back TJ Yeldon (who missed the Bills game) had 30. All told, Jaguars backs accounted for 30% of their team’s receptions this season. In the first meeting between these teams, the Jaguars had two drives (not counting Fournette’s 90-yarder) where they exclusively ran the ball right at the Steelers defense and produced scores. Defensively, the Steelers will need to stop the run (including Bortles’ scrambling ability) and force Bortles to beat them through the air on a cold day.

On the other side of the ball, the Jaguars have a nasty pass rush but generally “play the run on the way to the quarterback” and have been gashed on the ground this year. Jacksonville has the 21st-ranked run defense and have given up over 100 yards on the ground to 6 of their last 7 opponents. The Steelers ground game has been picking up steam late in the season and has put up over 100 yards in 3 straight games. After leading the league in rushing at the three-quarter mark of the season, Le’Veon Bell’s workload decreased down the stretch but he also became a more productive runner. Over his last 5 games, Bell averaged over 4.2 yards per carry in all but one game while only averaging 18 carries per game. Prior to that, Bell had averaged over 3.9 yards per carry just once in the previous 6 games and had averaged 24 carries per game in that stretch. Bell has admitted he feels healthier at this point in the season than he did entering last year’s playoffs which could be the key to the Steelers making a deep run. Bell finished third in the league in rushing but the Steelers as a team ranked 20th because they did not have another player run for over 150 yards. The best way to keep the ball away from Jacksonville’s ball-hawking secondary and to keep their pass rush honest is to come out and establish a strong ground game. Both teams come in with a desire to run the ball and play “January football.” With the cold weather expected for Sunday, the team that is able to run the ball more efficiently will likely book their ticket to the AFC Championship.

Behind the Numbers: Steelers-Jaguars Playoff Edition was last modified: January 10th, 2018 by Ian 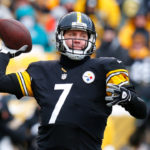