Antonio Brown is the Least of Steelers Problems

Shortly after the Steelers’ loss to the Cowboys on Sunday the grumbles began on social media involving Antonio Brown.

Yes, that’s right. Antonio Brown, who finished the game with 14 catches for 154 yards and what should have been the game-winning touchdown was the one getting grief after a game in which the defense gave up 35 points. People are mad at Antonio Brown after a game in which the defense let Ezekiel Elliott score 3 long touchdowns without even coming close to getting a hand on him.

“Antonio Brown runs out of bounds with a punter in front of him!” You tell me where Antonio is going to go from that spot. Do you really think he’s picking up more yards there? Even if that is “just a punter” in front of him, that guy has 2 inches and 20 pounds on Brown.

“Antonio Brown steps out of bounds as the clock expires!” Would you like to see Brown fight harder here? Sure, probably. But what exactly is he supposed to do in this spot? Clearly he’s not scoring… The only other guys anywhere near him on the field are IN FRONT of him, eliminating the chance of a lateral (which he probably can’t even see them from where he is).

“Why’s Antonio Brown on the field trading jerseys with Dez Bryant after the game they just lost?!”

You know what? I’m not concerned with those things. I’m not concerned with Antonio Brown wearing painted cleats or “becoming a distraction” or worried about him “being selfish.” You know why? Because none of these things has affected the on field product. Antonio Brown works his butt off and it’s obvious he has great chemistry with his quarterback.

Antonio Brown, even if you may not like his personality or his antics, is out there making plays that win football games. I totally get it. Steelers fans in general are old-school. Steelers fans want to see Heath Miller catch a first down and hand the ball to the referee and trot back to the huddle. You can choose to not like the way Brown carries himself, but the things he does shouldn’t concern you when it comes to wins and losses.

You know what does concern me?

Jarvis Jones not filling gaps and getting off blocks concerns me. Mike Mitchell take horrible angles to the football and missing tackles concerns me. Not having a single player on this defense that can rush the passer concerns me.

Those are the things that lost the football game on Sunday… Not Antonio Brown.

Some have said Antonio Brown doesn’t really care about wins and losses as much as he cares about his stat line. I’m not sure I buy that, but here’s the thing… Even if it’s 100% true, it doesn’t really matter. I’ll agree that AB loves him some AB.

As long as Brown continues to carve up defenses and make plays, I’m not worried about him. Brown chasing stat lines what’s going to make this team potentially win football games. Talent wins football games, and right now I wish we had some selfish, talented players on the defensive side of the ball. 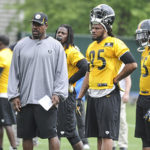 Jones’ Demotion is Shot Across Porter’s Bow As Well