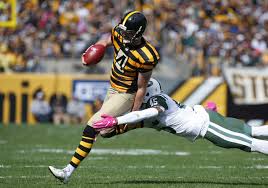 Trick plays in football are by and large the most divisive in all the game has to offer. When one works, that team’s fan base will whole-heartedly agree it was a “brilliant” call. When it doesn’t work, the fan base is all-in on trashing the decision. All of that stuff is on the surface though because calling a trick play and executing it are vastly different things and that’s what occurred on the Steelers’ failed fake field goal attempt Sunday against the Jets.

Steelers’ Special Teams’ Coach Danny Smith called for a fake during the second quarter of yesterday’s win. Thankfully, the failure of it didn’t come back to haunt the Steelers in the end but did result in a Jets’ touchdown. Still, it remains a head-scratcher for me simply based on what I saw. The picture below is the pre-snap. It’s fourth down and two at the Jets’ 28-yard line & this would have been a 46 yard field goal attempt.

Holder Jordan Berry has likely been given the go-ahead by Coach Smith and/or Coach Mike Tomlin to look for the keys that would tell him the fake is on. It could have been called from the start but that’s rare given how field goal block units rarely line up the same each time.

The simple math here is that there are seven NYJ players to the right and four to the left. Here is where apparently common sense goes out the window. Berry has four blockers to his right who are tasked with occupying seven defenders. Ya it doesn’t make much sense to me either… Sure, it’s just two yards but keep in mind Berry is eight yards behind Greg Warren with a knee on the ground. (Lining up an extra yard deep may also have tipped the Jets to the fake.)

In the second photo below, you’ll see where the execution portion of this play went horribly wrong. Jesse James is moving right and he will engage that defender and block him to the sideline pretty effectively. The one guy that they had to block, however, wasn’t, That was #45 Rontez Miles who is about one step ahead of Berry with Alejandro Villanueva in between. Villanueva is doing as instructed -he’s peeling back looking for blockers- but he’s missing the only guy that’s dangerous.

In the photo below left you’ll see where Miles is easily going to beat the less-athletic Berry to the marker despite the fact James has his man blocked.

Had this play worked, it would have been nullified due to a penalty on Villanueva who was not lined up correctly. So all-in-all a pretty bad play for the former Army Ranger. That said, the decision itself was bad one in my opinion. With only two yards to go, why not leave your offense out there? It’s only one of the most prolific offenses in the league isn’t it?

Furthermore, going right and going right into the teeth of the defense seemed to be quite asinine and lastly, you have a kicker who has been incredibly consistent from that range so why not just kick it?

pick on but sometimes the timing of said plays can be just as bad as the execution and this is one of those instances.