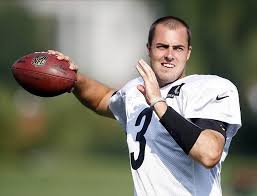 I’m pretty sure I still get a vein that pops on the side of my head every time I think about the selection of Landry Jones in last year’s draft. The Steelers needed to get younger at the back-up QB position but they had already signed Bruce Gradkowski and there were any number of quarterbacks available in the 6th or 7th round and in free agency.

In hindsight, drafting a QB looked even dumber when Ben Roethlisberger went out and started all 16 games in 2013.

Granted, the Pittsburgh Steelers didn’t have the luxury of hindsight in the 2013 draft, but was the fourth round really the best time to pick a guy who had little chance of seeing the field anyway?

If the Steelers needed to add depth in 2013, then how do we describe the situation in 2014?

There are any number of very nice quarterbacks available in this draft but there isn’t one that should be selected by the Steelers. I strongly believe they should sign one or two in free agency in the moments after the draft ends on Saturday but other than that forget it. They cannot afford misses in this draft and selecting a quarterback would be a swing and a miss of massive proportions.

Drafting Jones last season wasn’t necessarily the problem. It was more about when they drafted him. A selection of a quarterback this weekend would tell me two things; they didn’t learn their lesson from last year and they have no confidence in Jones to boot.

A QB Selection for Pittsburgh Should Not Be an Option in This Draft was last modified: May 7th, 2014 by Steeldad
Ben RoethlisbergerBruce GradkowskiLandry JonesNFLPittsburgh Steelers

Todd Haley likely has the advantage in...

Why the Steelers Should Go Wideout in...

I didn’t have a problem with selecting a QB in the draft last year, but I cringed in dismay when the pick was announced. I didn’t like it. Wrong QB; wrong round. I wish the Steelers would have done what Atlanta did, which was select Duke QB Sean Renfree in the seventh round … and then find a way to put him on injured reserve before the season started. Maybe it was a legitimate injury; maybe not.

I liked Renfree a lot coming out of Duke. His coach there, by the way, was David Cutcliffe, the former New York Giants’ QB coach who made a name for himself working with Eli Manning.

Getting upset with the Landry Jones pick is like a Packers Fan getting upset at the Aaron Rodgers pick when Brett Favre still had 7 years left on his career and we see how that turned out. You may disagree but Landry Jones is going to be the Steelers Aaron Rodgers. Ben has two years left on his contract and he can make a lot more money somewhere else. The Steelers are not renewing Bens contract, and there was talk of a trade last year. What does that tell you. Nobody thought Ben would go 16 games unhurt or would fall in line with Haley’s quick pass offense like he did in the second half. I don’t understand why does Landry Jones gets no respect and so many in Pittsburgh write him off before he gets a chance.. Landry should have been drafted higher would have been if he went a year earlier. Landry holds every record in the Big twelve who saw 7 number one QB draft picks in the last 6-8 years. If those guys were better why didn’t they set all the records. He is 6-4 and averaged 4,000k yards and 30 TD’s a year for 4 years and unlike Bridgewater and Bortles he played in a BSC conference with Real Competition. The knocks on him are not even true he is good at avoiding pressure and avoiding Sacks he was only sacked 52 times in college with 2183 attempts. Ben was sacked 46 times last year alone. Steelers won’t pay Ben 100 million for his last 4 years. Wake up and embrace Landry as the next Franchise QB in Pittsburgh.

I appreciate you writing Scot but I couldn’t disagree more. Jones was lucky to be a 4th rounder while Aaron Rodgers was a first round pick. Numbers at the collegiate level don’t always translate to NFL success. See Timmy Chang, David Klinger or Graham Harrell.
Jones showed very little in the preseason last year and was outplayed by John Parker Wilson throughout camp. If Jones becomes the next Aaron Rodgers I’ll gladly eat crow.