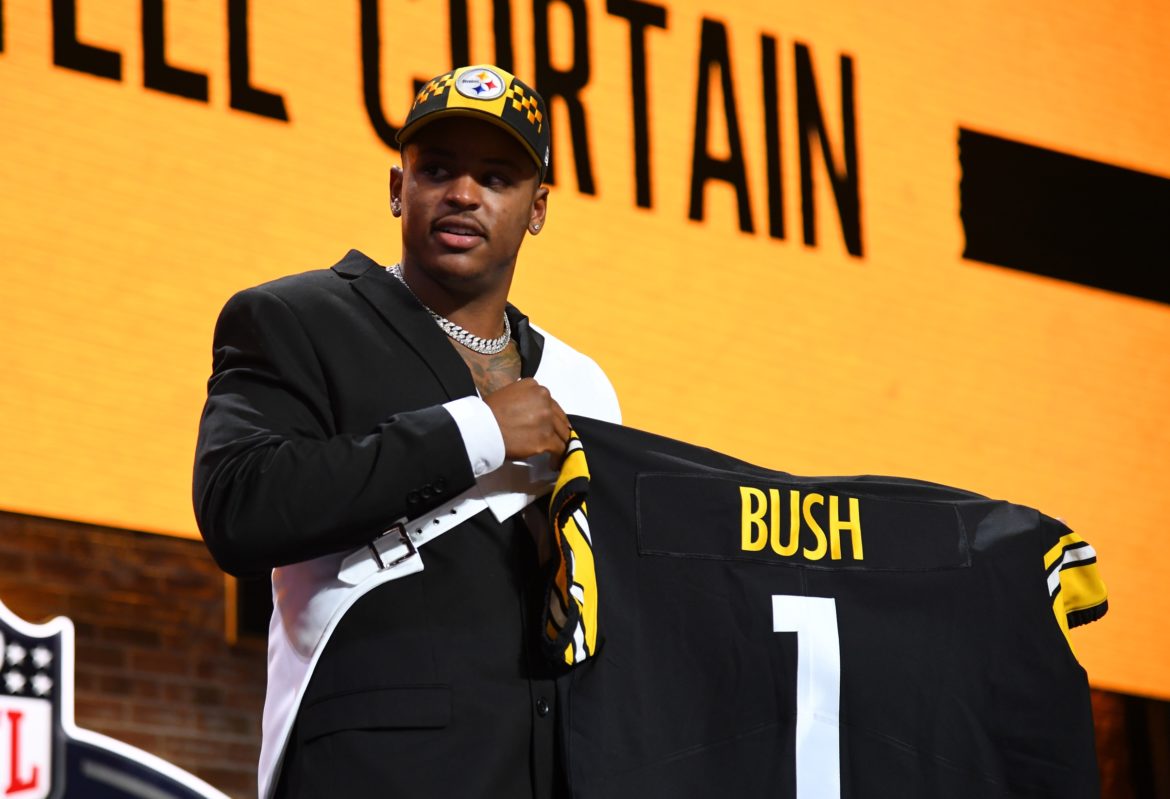 Welcome to NFL Draft Week! For the first 12 years of Mike Tomlin’s tenure as head coach, the Steelers did not make a trade involving their first round pick. However, they departed from that trend in a big way over the last two seasons. In 2019, they made a big move up the draft board to the #10 spot to draft Devin Bush. Then later that year, they traded away the 2020 first round pick for Minkah Fitzpatrick. The Steelers now enter the 2021 Draft, set to make a first round pick for the first time in two years. Could they be on the move again this year? Here is a look at what it would take to move out of the 24th overall pick and some potential trade partners.

The Steelers have 8 picks in the 2021 Draft. Overall, the Steelers have the 24th, 55th, 87th, 128th, 140th, 216th, 245th and 254th selections. Over the years, the NFL has developed “trade value charts” starting with a revolutionary one by Jimmy Johnson in the 1990s. With the adoption of the most recent CBA and the ability to give first round picks an extra year on their contract with the “fifth year option” the value of picks changed slightly. Rich Hill of PatsPulpit.com took all of the trade data since the new CBA was adopted and created a new trade value chart. Essentially, the 5th year option clause gives a higher value to first round picks, at about the increased cost of an extra 5th rounder from the previous chart. While each team places their own values on certain draft picks, the Steelers 2019 first round trade with Denver worked out nearly evenly based on the Jimmy Johnson chart. For purposes of this article, I used Johnson’s chart to determine trades that would be approximately equal in value.

We have talked at length on the Steel City Blitz Podcast that the only player worth a massive move up is Justin Fields. If Fields makes it past the #7 pick currently held by Detroit, the Steelers could have the ammunition to move up into the Top 10 if they are willing to be creative. Given that the cost of moving up for a quarterback generally starts at two first round picks, a move up from 24 into the Top 10 would require their current first round pick along with their 2022 first round pick. Those two picks alone can probably get the Steelers to 10th (Dallas). Throwing in a 3rd round pick (either their current 3rd or their 2022 3rd) as well as additional later-round compensation could get them as high as #8 (Carolina). Denver (at #9) and Pittsburgh have done deals in the past, but the Broncos may also be in the quarterback market. The one issue with this scenario is the trading team would not receive any additional picks this year and would have to settle for two picks in next year’s draft in return (if the total package was 2021 1st, 2022 1st and 2022 3rd). The Steelers have shown in the past they are willing to part with future picks when they know a comp pick is coming back in that round and they are guaranteed a 3rd round comp pick next year for Bud Dupree.

The Patriots currently hold the 15th pick in the Draft. The Steelers have never been big trade partners with New England, but to get ahead of Bill Belichick (assuming he does not move up), it would likely cost the Steelers a 1st and 2nd round pick in this year’s draft. Teams between 11 and 14 are currently the Giants, Eagles, Chargers, and Vikings. The Vikings are somewhat in win-now mode but the others are in various stages of rebuilding and could value the extra picks. It seems highly unlikely that a player like Justin Fields would drop outside the Top 10 without someone trading up to take him, but if he is still available in this range, the ability of the Steelers to move up the draft board certainly improves.

Moving up into the Top 20 would be jumping about 5 or so spots on the draft board and could likely be done for a 1st and 3rd round pick in this year’s draft. The Steelers have made trades in the past with Miami (who sits at 18 and has a plethora of picks). Washington and Chicago (sitting at 19 and 20) are both in the quarterback market. Washington is also in the market for offensive linemen, and may want to stay ahead of Indianapolis who is also in need of linemen. A move up into the Top 20 would likely be targeting a lineman to get in front of Indianapolis.

The Jets have two first round picks this year. They own the #2 overall pick of their own volition and also have the #23 pick they got from Seattle in the Jamal Adams trade. The Jets will be taking a quarterback at #2, but depending on what they seem to be signaling at 23, the Steelers may have a desire to get ahead of them. The Jets need a running back and if the Steelers see a big gap between the top backs in the class, could look to get ahead of the Jets to secure the top running back (presumably Najee Harris). The potential trade partners here would be Indianapolis or Tennessee, though it would seem unwise for Indy to trade back behind their division rivals. The Steelers could make a move with either of these teams at the cost of a 4th round pick (which they have two of this season).

The Steelers are in the unfortunate scenario of having three teams directly after them in the draft without much incentive to trade. The Jaguars are picking 25th, in the Rams pick they got back for Jalen Ramsey. In addition to having the #1 overall pick, the Jaguars also have pick #33 and have little incentive to move up one spot. After Jacksonville is Cleveland and Baltimore, who are unlikely to make a trade that would benefit the Steelers in any way. Baltimore also owns the #31 pick from Kansas City, which was thought of as a potential trade down spot for the Steelers prior to the Orlando Brown trade. The Steelers may also have a desire to stay ahead of their division rivals on the draft board and not trade down.

Trading back into the late 20s is certainly an option for the Steelers as many of the players they are targeting will probably still be on the board. New Orleans has been aggressive in the first round under Sean Payton, but only has 6 picks in the whole draft. The Saints do have the last Compensatory pick of the 3rd round, and a trade of #28 and #105 in return for #24 would be relatively even.

The best candidate for trading back might be Green Bay. The Packers have also been aggressive in recent years, including trading up for QB Jordan Love last year. Will this finally be the year they give Aaron Rodgers some weapons in the draft? If they are in the market for a wide receiver it may behoove the Packers to get ahead of Jacksonville, Cleveland, and Baltimore. The Packers also have a whopping 10 picks in the draft. A trade of Green Bay’s 3rd rounder to the Steelers (#29 and #92 in return for #24) would be about equal. The teams may need to swap some late-round picks to completely balance the trade.

With Kansas City and Baltimore making a trade, the only likely options at the tail end of the first round are Buffalo and Tampa Bay. The Steelers would like to stay in the 1st round because of the benefits of the 5th year option on the rookie contract. A trade with Buffalo could net a first and third round pick in return (#30 and #93). There may also be a swap of late-round picks to balance out the deal. With Tampa Bay, the Steelers could get a Day 2 pick in return. The intriguing scenario here would be how the trade would balance out. If the Bucs traded their 1st and 2nd rounders (#32 and #64) the Steelers would likely owe them some compensation in return in the later rounds to balance things out. If the Bucs traded their 1st and 3rd rounders (#32 and #95), they would owe the Steelers some additional late-round compensation to balance the deal. Last year, the Packers and 49ers both moved up the draft board from the early 30s. The Packers gave away a 1st and a 4th to move up 4 spots from 30 to 26 while the 49ers gave away a 1st, 4th, and 5th to move up 6 spots from 31 to 25.

As mentioned previously, the Steelers don’t like to trade out of the first round entirely because they lose the 5th year option potential on the rookie contract. Additionally, the first two teams picking in the second round (the Jaguars and Jets) have picks sandwiched around the Steelers in the first round at 23 and 25. Trading back with either one of them seems unlikely as they would have two consecutive picks in the mid-20s of the draft. Similarly, Miami has two 1st rounders and two 2nd rounders so it’s unlikely they’d want to move up for a third 1st rounder from the #36 pick.

Atlanta, if they trade out of #4 overall, may have a TON of picks to play with in the draft. The Falcons already have 9 picks and depending on where they land after a trade-down, could still be in the market to move back into the first round from the #35 overall pick. The Steelers could likely get two Day 2 picks from the Falcons in return for their first round pick. A perfectly even trade would be Atlanta sending their second (#35), third (#68), fourth (#108) and compensatory fifth (#182) to Pittsburgh in exchange for their first (#24) and third (#87).

Philadelphia received a number of picks from Miami in exchange for the 6th overall pick and could also swing a deal with two Day 3 picks. The Eagles have 11 picks currently in the draft and have plenty of needs, so if they want to get back into the first round, they can afford to part with a few selections. A good comparable here is that last year the Chargers traded their second and third round picks (#27 and #71) to the Patriots for the 23rd overall pick. A perfectly even trade would be the Eagles trading a second, third, fifth, and swapping 6ths for the Steelers first. Overall it would be #37, #84, #150, and #189 in exchange for #24 and #216.