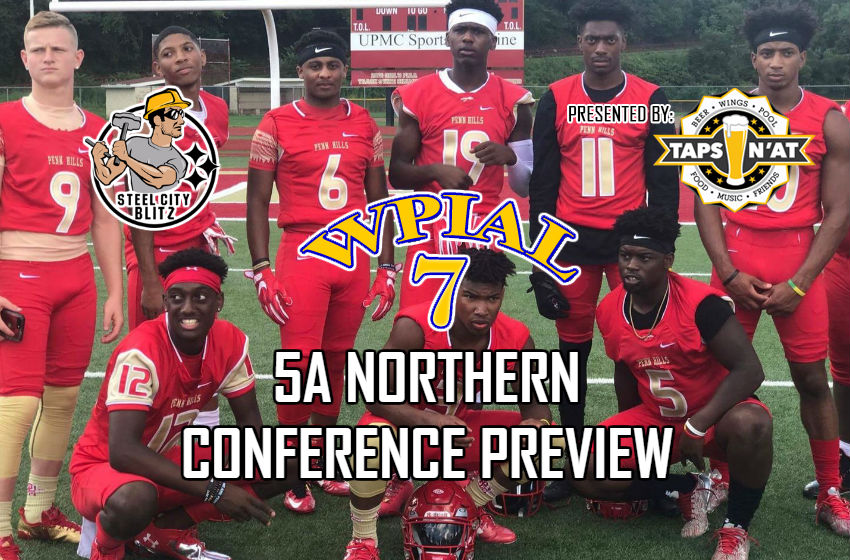 Over the last two years, 5A has produced some of the most exciting playoff games in the entire WPIAL. The realignment cycle added 6 teams to the 5A ranks, which resulted in 3 conferences with 8 teams in each. For this season, 16 teams will make the playoffs. This means the top 5 from each conference will automatically qualify for the postseason along with one sixth place team based on the Wild Card formula. Unfortunately, the downside of the increased number of teams is that the WPIAL 5A Championship will be played at Norwin High School rather than at Heinz Field. The 5A Classification is loaded with good teams that have strong football traditions which should make for a great season. The Northern Conference is the new “third” conference added to 5A this season. It features three teams new to 5A – Penn Hills and Shaler moved down from 6A and Mars moved up from 4A. Armstrong and Kiski formerly played in the 5A Big East Conference while North Hills, Hampton, and Fox Chapel played in the Allegheny Conference.

For the first time ever, Penn Hills will not be competing in the WPIAL’s largest classification. The Indians fell below the cutoff for 6A and after some deliberation the school board opted to compete in 5A for the next two years. Penn Hills reached the 6A semifinals last year after a close victory over Bethel Park then fell 17-8 to a defensive-minded Central Catholic squad. The Indians will be loaded once again and should be a threat to compete for the 5A title. Senior QB Hollis Mathis threw for 2435 yards and 27 TDs last season and returns his top two receivers in Daequan Hardy (783 yards, 10 TDs) and Dante Cephas (767 yards, 15 TDs). Mathis is the top-ranked quarterback prospect in the state and has committed to Howard. Hardy and Cephas both have offers from a number of D1 schools. Leading rusher and fellow Howard-commit Terry “Tank” Smith also returns for his senior season after rumbling for 678 yards and 8 TDs last year. The Indians will also be boosted by Corey Thomas who transferred back to him home district from Central Catholic after racking up 275 receiving yards and 4 TDs last year. Thomas is also a D1 recruit at safety where he has a number of FBS offers. Not only will Penn Hills have an explosive offense, but they might have the best secondary in the entire WPIAL with Cephas, Hardy, Thomas and junior Aakeem Snell who already has an offer from Howard.

The Fighting Planets have reached the playoffs in 13 consecutive seasons. The housing growth around Cranberry over the last two decades has played a role in Mars’ upward momentum. Mars will play in 5A this year after competing in 4A the last two years. Before the move to 6 classifications, Mars had played in AA up until 2008 when they moved to AAA. In just over a decade Mars has gone from being in the bottom half of schools in the state (AA in 06-07) to being in the top third. A number of players return from last year’s team, led by senior QB Tyler Kowalkowski (910 yards, 8 TDs). He will get back his second-leading receiver in Tom Sheehy (236 yards, 3 TDs). Mars always has a potent ground attack and their top three rushers from last year all return. Senior Garrett Reinke (533 yards, 9 TDs) will lead the way once again with sophomore Teddy Ruffner (512 yards, 5 TDs) and senior Chuck Green (474 yards, 4 TDs) also getting their share of carries. DE/TE Michael Carmody, whose older brother Rob is going to Notre Dame for basketball, has a number of offers from Big 10 and ACC schools.

Two years after the merger of Kittanning and Ford City high schools, the Riverhawks have been a successful football team. Their first year they won the Big East Conference then followed it up with a 6-4 season where they missed the playoffs by one game. Senior Jalen Price figures to step in to the quarterback role and returns leading receiver Isaiah Price (344 yards, 5 TDs). Senior Devon Goodgasell (233 yards, 2 TDs) also returns to the receiving corps. Junior Isaac Ridinger is the top returning rusher for Armstrong (214 yards, 3 TDs) after running for 5.2 yards per carry.

The Indians missed the playoffs last season after a series of close games. They lost to playoff teams West Allegheny by 1 and Woodland Hills by 8. They did beat Fox Chapel (who also made the playoffs) soundly, but followed it up with a 7-point loss to Moon which kept them from the postseason. North Hills has not won a playoff game since back-to-back semifinal appearances in 2009 and 2010. Many of last year’s key contributors graduated, leaving senior Tyler Brennan as the top returning skill player. Brennan did a little bit of everything last year, rushing for 334 yards and adding 248 receiving yards and scoring 5 times. He has a scholarship offer from Army. Defensive lineman Lirion Murtezi has attracted the attention of some FCS schools and should help solidify the interior of the Indians defense.

It has been a downward spiral since the middle of the 2016 season for the Cavaliers. Kiski started 2016 with a 4-1 mark then lost their last 5 outings to miss the playoffs. Their struggles continued in 2017 where they went just 1-9 with their only win coming over lowly Connellsville. Kiski should have a capable aerial attack once again this season. Senior QB Ryne Wallace threw for 1146 yards and 6 TDs last year while junior Bryson Venanzio threw for 452 yards and 3 TDs. Leading receivers Jack Colecchi (714 yards, 5 TDs) and Troy Kuhn (303 yards, 3 TDs) also return for their senior seasons. In the backfield, second-leading rusher Drew Dinunzio-Biss (370 yards, 3 TDs) should take over the leading role after averaging 8.2 yards per carry. Kiski went through some growing pains last year, particularly on defense where they allowed 34 points per game. If they can tighten things up the Cavaliers should be able to compete for a playoff spot.

The Foxes made the playoffs for the second time in 4 seasons last year and battled top-seeded Penn-Trafford to a tough 28-21 defeat. Unfortunately for Fox Chapel 20 seniors graduated from last year’s team, including nearly their entire starting lineup. They will need to find an entirely new backfield, but whomever steps in at quarterback will have speedy slot back Cole Waxter at his disposal. Waxter did a little of everything last year, leading the team with 406 receiving yards and adding 117 yards on the ground and scoring 3 times.

The Talbots got off to a quick start last season, winning their first two conference games. Unfortunately, things started to unravel after that and Hampton would end the season on a 7-game losing streak. Senior QB Max Obenrader saw some spot duty last year and will take over the starting role. He was one of Hampton’s best runners, averaging 7.5 yards per carry and could fill the role of a dual-threat quarterback. Vince Schmitt is the team’s top returning rusher (310 yards, 3 TDs). Senior WR Brandon Stephany will likely be the top target on the outside.

The Titans enter 2018 with the WPIAL’s longest current losing streak at 21 games dating back to Week 6 of 2015. The move from 6A down to 5A may prove beneficial for Shaler. Junior QB Darin Mizgorski threw for 615 yards and 4 TDs last season. Shaler also returns their top two rushers from last season in Joey Kremer (696 yards, 1 TD) and Jake Pollack (186 yards). If the Titans are going to break their losing streak, they will need to improve on both sides of the ball. They had the lowest-scoring team in 6A last year, averaging just 8 points per game and scoring in double-digits only 3 times. On defense, they allowed over 41 points per game and held only 2 opponents under 30.