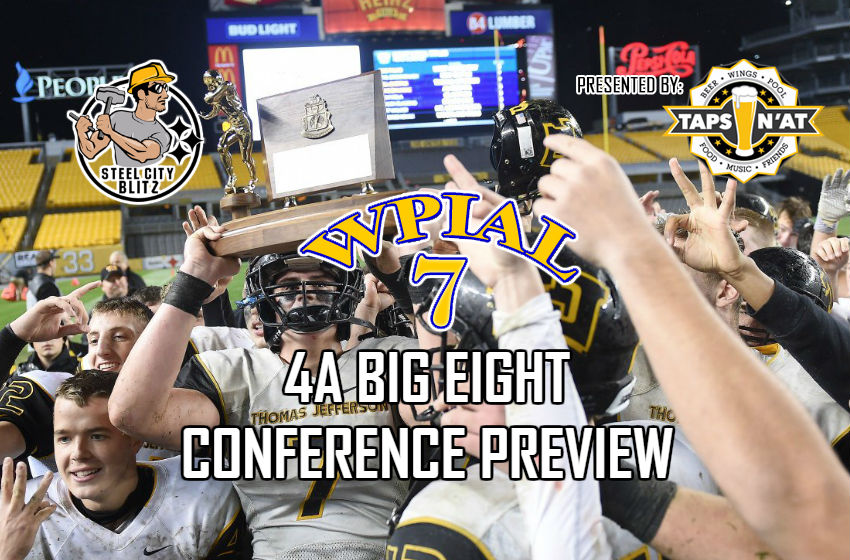 Since the move to 6 classifications, 4A has seen upsets shake up the playoffs and Thomas Jefferson claim the title both times. Unfortunately for the WPIAL teams, their 4A Champion has to play in the same half of the state playoff bracket as powerhouse Erie Cathedral Prep. Thomas Jefferson has been knocked out of the state playoffs in three straight seasons by Cathedral Prep (who has won the last two PIAA titles). This realignment cycle saw three teams leave 4A while only one new team joined the classification. With 16 total teams they are evenly divided into two conferences. The top 4 from each conference will make the playoffs and the 4A Championship will once again be played at Heinz Field. The Big Eight Conference features three-time defending WPIAL Champions Thomas Jefferson who are looking to join Braddock, Penn Hills, and Clairton as the only teams to win 4 straight WPIAL titles.

The Jaguars won their third consecutive WPIAL title last season, and for the third straight year fell to Erie Cathedral Prep in the first round of the State playoffs. Thomas Jefferson is tied with Aliquippa for the longest current streak of playoff appearances at 23 years, dating back to 1995. Incredibly, they have reached at least the semifinals in 21 of those 23 seasons and won 7 WPIAL titles. Shane Stump took over the starting quarterback role as a sophomore and threw for 1621 yards and 24 TDs. Many of the other significant contributors from last season graduated, but TJ’s depth is strong enough to keep them in contention for yet another WPIAL title. Fellow rising junior Dan Deabner (198 yards, 5 TDs) is the top returning receiver and was a big play threat, averaging 22 yards per catch last year. Seniors Max Shaw (160 yards, 4 TDs) and Zach Wagner (103 yards, 3 TDs) are the top returning rushers, but keep an eye out for sophomore DeRon Van Bibber who averaged 7.2 yards per carry in limited work last year.

The Leopards posted an undefeated regular season which led to their 9th straight playoff appearance and first trip to the WPIAL semifinals since 2000. Unfortunately, their run ended at the hands of eventual WPIAL champions Thomas Jefferson whom they had defeated in the regular season. They had the second-best defense in 4A and return a number of players from last year’s squad. Jared Hartman started at quarterback as a sophomore last year and threw for 928 yards and 15 TDs. Hartman proved to be a dual-threat at QB last year, adding 238 yards and 9 TDs on the ground. Leading rushers Mason Pascoe (788 yards, 6 TDs) and Larry Callaway (433 yards, 5 TDs) also return. Defensive lineman Kirk Popelas has a few offers from FCS schools. This core group of players is talented enough for Belle Vernon to challenge for the conference title once again.

The Titans dropped two games to Fayette County teams (Albert Gallatin and Laurel Highlands) last season, but their victories over Trinity and Ringgold were enough to sneak into the playoffs. West Mifflin has an offensively talented roster, but it was their defense that let them down last year, giving up 35+ in their last three games. Senior RB Parrish Parker led the team with 884 yards and 11 TDs last season and has committed to Howard as a defensive back. Matthew Schuster split time at QB last season, throwing for 210 yards and 2 TDs. Senior TE Zion Weems is the top returning receiver. Senior RB Nevin Cardamone should take on an increased role in West Mifflin’s run-heavy offense after averaging 9.1 yards per carry last season.

After a 1-win 2016 campaign, last year’s 5-5 record was a significant improvement for the Mustangs. They topped West Mifflin and only a 2-point loss to Ringgold separated them from a playoff spot. Senior QB Conner Basinger threw for 888 yards and 8 TDs last season and also led the team in rushing with 878 yards and 13 TDs. Basigner is the latest dual-threat quarterback to have a shot at the exclusive “1000 pass/1000 rush” club. Dominic Richter and Ryan Fike should lead the supporting cast. Both players averaged over 5 yards per carry and over 16 yards per catch last season.

Two early wins over Ringgold and Laurel Highlands put Greensburg Salem in position to make a run at a playoff spot. The Golden Lions lost 5 of their next 6 games, including a 14-7 loss to West Mifflin which cost them the head-to-head tiebreaker. Greensburg Salem has not reached the postseason since 2011 but should be in the mix for a spot this year. Junior QB Trent Patrick took over in Week 7 last year and threw for 317 yards and 2 TDs. Fellow junior Aaren Putt was the team’s second-leading rusher with 411 yards and 5 TDs. Senior Dajuan Hertzog accounted for 329 yards of total offense and 4 TDs while splitting time at back and receiver. Tyler Williams was the second-leading receiver with 207 yards and 1 TD, averaging 15.9 yards per catch.

The Hillers made the playoffs for the first time in 5 years, but unfortunately drew Thomas Jefferson in the opening round. Trinity leaned heavily on their running game last year and their top two rushers both graduated. Sophomore Kaden Kolsen may be the starting quarterback this year after throwing a handful of passes in backup duty last season. Kolsen also averaged 7.2 yards per carry, so he will definitely have a role for the Hillers offense. Cole Bair is the top returning skill player after accounting for 351 receiving yards, 48 rushing yards, and 9 total TDs.

The biggest news out of Ringgold this year is on the sideline where former Aliquippa head coach Mike Zmijanac will take the helm. The Rams missed the playoffs for the first time since 2009 last year after their season ended on a 3-game losing streak. This is a lineup that will have significant turnover this year after 21 seniors graduated. All of their significant contributors on offesne will need to be replaced. Look for Ringgold to focus on their running game with Zmijanac’s ground-and-pound mentality.

The Little Indians move to the Big East Conference this year after spending the last two seasons in the Northwest Nine. Indiana won just one game last season and struggled on both sides of the ball. They gave up the second-most points in 4A, allowing over 40 per game. Besides their win over Ambridge, they did not come within two scores of any opponent. Sophomore RB Ethan Marcozzi tied for the team lead with 4 TDs last season.