The victory lights on the Cathedral of Learning in Oakland will be dark tonight, but Twitter was plenty lit during Pitt’s 33-14 loss to Penn State.

This needs to happen every year!!!! pic.twitter.com/W3WLmf3Rsj

ah yes, the fine ABC tradition of going to a commercial instead of the subsequent game that has already been pre-empted for 15 minutes

Browne missed not one but two wide open receivers on that play. And before you have time to be done being mad, it's 7-0 PSU.

Pitt looks as if they were distracted by the media all week.

Pitt-Penn State was so much better when there wasn't social media.

Find myself wondering if Jester Weah might be a double agent. Heard people chanting this all afternoon:

Realizing how good Nate Peterman was.

Trace McSorley is Football Gerry MacNamara do NOT @ ME

My exact words on that McSorley-to-Barkley touchdown:

PSU playing "Sweet Caroline" after a TD … yep. #notmyrival sure …

Pitt needed TD there. FG is a consolation prize. Not good enough

How was Saquon Barkley not the highest rated recruit, like, ever? He's a damn Mario Kart yellow star.

No, people. I am not writing a Ben DiNucci Should Start article this week on CH. Get your minds out of the gutter.

If this is it for Browne (big if) Ben DiNucci unseated him even quicker than Sam Darnold did.

From an outside perspective, Penn St.-Pitt is just a fun game to watch. 2 classic uniforms, 2 bitter rivals. Good stuff, shd play every year

This loss will sting so much more when it's the reason Pitt misses out on the CFB Playoff.

Pittsburgh is about to have its favorite season: QB controversy. 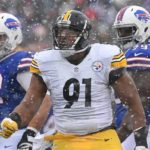 Why the Pitt-Penn State Rivalry Games are...