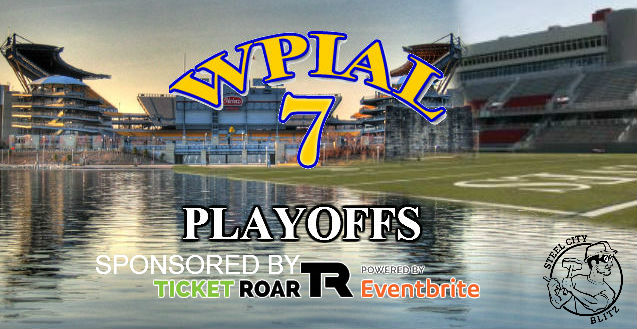 The WPIAL football regular season has come of a close. With all of the games completed we know the 64 teams across the 6 classifications that have qualified for the postseason and will battle it out for the WPIAL Championships at Heinz Field and Joe Walton Stadium. Tonight, the WPIAL will announce their playoff pairings, which will be broadcast live at 7pm on the TribLive High School Sports Network.

Thanks to our sponsors TicketRoar, an online ticketing company that provides services for high schools so you can preorder your tickets and have them on your phone when you get to the gate. A few local schools are already on board and have seen a much more efficient process of getting fans through the gate and into the game. You can find them on Twitter @TicketRoar and on Facebook.

The WPIAL playoff brackets have a few hard rules. In the first round, higher-seeded teams receive a home playoff game. All games after the first round are played at neutral locations. The WPIAL tries to get as many games as possible on artificial turf, so a team that should get a first round home game that has a grass field may have their game moved to another location. The teams that earn home games are decided by the standings. In 4A, 5A, and 6A the top 2 teams in each conference get home games. In 3A the 3 conference champions plus one second place team gets a home game. In 1A and 2A, the top 2 teams in each conference plus 2 third place teams get home games. Due to this, sometimes “better” teams are given lower seeds because they did not qualify for a home game.

The WPIAL has been consistently inconsistent in their construction of playoff brackets. They have generally given a slight advantage in the brackets to defending champions and tend to seed teams in 3-way ties consecutively. Since there are only 2 conferences in 4A, 5A, and 6A the WPIAL has been willing to slot teams from the same conference against each other in the first round. Additionally, on occasion the WPIAL has used an “inverted seeding” arrangement when a highly qualified team must receive a road game, they put them in the bracket where their “true” seed would be (for example, if a road team may be the “true” #3 seed, they might get the #6 seed so that they are still in the 3-6 matchup in the bracket).

Here’s my best guess at how the WPIAL playoffs will be seeded.

1. Pine-Richland (6-0, 10-0) – The Rams have clearly been the best team in 6A this year. They beat all 6 Northern Seven conference opponents and the top 3 teams from the Southeastern Conference.
2. Central Catholic (5-1, 8-2) – This was a toss-up between Central and Bethel Park, but I think the defending champion Vikings get a slight advantage by the WPIAL.
3. Bethel Park (6-0, 8-1) – The Black Hawks have been dominant on the ground this season and have a big win over North Allegheny
4. Mt Lebanon (5-1, 6-4) – WR Aidan Cain set a WPIAL single-season record for receptions and receiving yards.
5. North Allegheny (4-2, 7-3) – The Tigers won 6 of their last 7 (including a win over Mt Lebanon) but finished third in the Northern Seven Conference so they have to go on the road in the first round.
6. Penn Hills (3-3, 7-3) – The Indians have an explosive offense and scored a victory over Mt. Lebanon in non-conference play.
7. Peters Twp (4-2, 7-3) – The Indians are making their first playoff appearance since 2013.
8. Norwin (3-3, 5-5) – The fourth place team from the Southeastern Conference is the only 6A playoff team averaging fewer than 20 points per game.

1. Penn-Trafford (7-1, 9-1) – The Warriors beat Gateway head-to-head, shutting out the highest-scoring offense in 5A. That should be enough to get them the top seed. Their only loss was to McKeesport.
2. Gateway (7-1, 9-1) – Gateway lost to Penn-Trafford and beat McKeesport. The Gators have the WPIAL’s leading passer in Brady Walker.
3. Upper St Clair (7-1, 7-3) – The Allegheny Nine Conference Champions defeated West Allegheny in dramatic fashion by stopping a two-point conversion in overtime.
4. West Allegheny (6-2, 7-2) – The defending 5A champions have delt with a plethora of injuries this season. They could get the #3 seed if the WPIAL uses an “inverted seeding” scenario for McKeesport.
5. McKeesport (6-2, 7-2) – With wins over Upper St Clair and Penn-Trafford, the Tigers are a candidate for an “inverted seeding” scenario where they are given the #6 seed in order to be placed in the 3-6 game as the “true” #3 seed. If that happens, West Allegheny would likely get the 3-seed and Upper St Clair the 4-seed.
6. Franklin Regional (5-3, 6-3) – The Panthers have a stout defense and scored a Week 1 victory over McKeesport. They are seeded here in order to avoid rematches of Week 9 games (USC-Woody High and Gateway-Franklin Regional).
7. Woodland Hills (6-2, 6-4) – The Wolverines have the best defense in the Allegheny Nine Conference and are coming off a victory over Upper St Clair in Week 9. It will be interesting to see if the WPIAL rematches them in the first round (I flipped them with Franklin Regional to avoid this).
8. Fox Chapel (5-3, 6-4) – This is the first playoff appearance for Fox Chapel since 2014. They beat Woodland Hills by a point early in the year and won their last 5 games after a 1-4 start.

1. South Fayette (8-0, 10-0) – Another undefeated regular season and conference championship for the Lions.
2. Belle Vernon (8-0, 9-0) – The Leopards won the Big Nine Conference after a surprising victory over Thomas Jefferson in Week 7.
3. Thomas Jefferson (7-1, 8-1) – The two-time defending champions suffered their first loss to a WPIAL opponent since 2015 when they were topped by Belle Vernon.
4. Montour (6-2, 7-2) – The Spartans earned a home game with a head-to-head tiebreaker over New Castle for second place in the Northwest Nine Conference.
5. New Castle (6-2, 7-3) – New Castle gets slotted against a conference opponent in the first round, just like last season when they upset South Fayette to start a run to Heinz Field.
6. Trinity (5-3, 6-3) – The Hillers are making their first playoff appearance since 2012 after winning 6 of their last 7 games.
7. Mars (5-3, 6-4) – Mars could have earned a home playoff game in a 3-way tie with Montour and New Castle but lost to Knoch in Week 9.
8. West Mifflin (4-4, 5-4) – The Titans lost to Laurel Highlands and Albert Gallatin this season, but a head-to-head win over Greensburg Salem was enough to give them the tiebreaker for the last playoff spot.

1. Aliquippa (6-0, 10-0) – The Quips have only allowed one touchdown to an opposing offense all season.
2. Quaker Valley (5-1, 9-1) – The second place team from the Beaver Valley Conference has a head-to-head win over Allegheny Conference Champion Seton La Salle.
3. Seton La Salle (7-0, 8-1) – The Rebels feature one of the leading rushers in the WPIAL in Lionel Deans.
4. Elizabeth Forward (6-1, 7-2) – The Warriors won a three-way tie atop the Interstate Conference to get a home playoff game.
5. Beaver (4-2, 8-2) – The Bobcats earned one of the 3A Wild Cards. Their only losses this season were to Aliquippa and Quaker Valley.
6. Derry (6-1, 9-1) – The Trojans are making their second straight playoff appearance after a trip to the semi-finals last year.
7. Freeport (6-1, 7-2) – The Yellow Jackets have the best defense in the Allegheny Conference.
8. South Park (6-1, 6-3) – The Eagles were “perfectly average” scoring 200 points and allowing 200 points this season.

1. Clairton (6-1, 7-2) – The three-time defending WPIAL Champions finished in a 3-way tie atop the Eastern Conference. This may be a controversial choice over an undefeated California team, but it is one I could see the WPIAL making given their history of how defending champions have been seeded. Seeding Clairton first also keeps Clairton and Jeannette on opposite sides of the bracket.
2. California (7-0, 10-0) – How much credit will the WPIAL give the Tri-County South Champions? California has impressive non-conference wins against Imani Christian and Rochester working in their favor and they are the only unbeaten team in 1A.
3. Jeannette (6-1, 9-1) – The only blemish on the Jayhawks record was a 40-7 loss to Clairton in Week 9. Jeannette and Clairton have met in the last 2 WPIAL title games and the WPIAL may want to set up a third rematch by keeping them on opposite sides of the bracket.
4. Imani Christian (6-1, 8-2) – The WPIAL may wish to keep Imani and Jeannette on opposite sides of the bracket after their game earlier this season was called early because of a fight on the field (and one in the stands that caused the police to be called). Five Imani players were suspended after that game, though the Saints still managed to top Clairton the following week.
5. OLSH (7-1, 8-2) – The Chargers won their first conference championship in school history. They won 8 in a row after a Week 1 loss to Northgate.
6. Rochester (7-1, 7-2) – The Rams lost back-to-back games to OLSH and California in the middle of the season but were otherwise very impressive.
7. Carmichaels (6-1, 7-2) – The Mighty Mikes beat Fort Cherry in Week 8 to secure second place and a home playoff game.
8. Fort Cherry (5-2, 7-2) – The third place team from the Tri-County South earned a home playoff game as the second-best third place team.
9. Western Beaver (5-3, 6-4) – The third place team from the Big Seven Conference did not get a home playoff game.
10. Union (5-3, 7-3) – Union started the season strong but cooled off down the stretch and lost a head-to-head game to Western Beaver for third place.
11. West Greene (4-3, 7-3) – The Pioneers are making their first playoff appearance since 1993, the longest drought that was broken this season (and the third-longest entering the season).
12. Springdale (4-3, 5-5) – The Dynamos defeated GCC in Week 9 in a game that could have forced a coin toss for a playoff spot if GCC had won.
13. Sto-Rox (3-5, 3-7) – The Vikings started the season 0-6 but won 3 of their last 4 and amassed enough Gardner Points and head-to-head tiebreakers to make the playoffs.
14. Summit Academy (3-5, 4-5) – The school for ajudicated youth is making their second playoff appearance in school history after earning the 1A Wild Card.
15. Bishop Canevin (3-4, 3-6) – Canevin saw a number of players transfer over the summer but still managed to make the playoffs for the third straight year.
16. Monessen (2-5, 3-7) – A head-to-head victory over Jefferson-Morgan was enough for the Greyhounds to get back to the playoffs for the first time since 2013.