With the conclusion of Week 3 games we are now a third of the way into the 2018 WPIAL football season. Here’s a look at the final scores and some game notes from Week 3. It should be noted that a few games which were originally scheduled for Friday night were moved to Saturday due to weather conditions early in the week causing water damage on certain fields.

Pine-Richland 63, Butler 0
The Rams remained undefeated against schools from Pennsylvania since 2016.

Seneca Valley 17, Mt. Lebanon 14
A tough defensive struggle on both sides ended with Seneca Valley securing the victory. The Raiders built a 17-7 second half lead and held on with some tough defense.

North Allegheny 45, Canon-McMillan 21
Canon-Mac hung tough for a while, but ultimately North Allegheny was just too much and pulled away to move to 4-0.

Chartiers Valley 28, Norwin 24
The teams went back-and-forth trading the lead in the second half with Char-Valley emerging victorious.

Baldwin 48, Moon 42
Baldwin stormed back to tie this game up and send it to overtime. After a Moon missed field goal, Baldwin scored to claim the victory and move to 3-1 on the season.

Peters Township 42, West Allegheny 28
Ryan Magiske scored two first half TDs to help Peters build a 28-14 halftime lead then came up with an interception late in the 4th quarter to help seal the win.

Upper St. Clair 16, Woodland Hills 14
It hasn’t been pretty for Upper St Clair this season, but they are now 4-0 with an average margin of victory of just 3 points. For Woodland Hills, this is the first 0-4 start in school history.

Penn-Trafford 20, McKeesport 9
The Warriors have bounced back from an 0-2 start to win two in a row, including this hard-fought defensive struggle over McKeesport. Penn-Trafford sealed the win by returning a fumble for a touchdown.

Kiski Area 37, Fox Chapel 0
Cavaliers QB Ryne Wallace threw for nearly 400 yards and 5 touchdowns to lift Kiski’s record to 3-1 and keep them in the playoff conversation.

Penn Hills 36, Mars 15
Daequan Hardy had a monster game for Penn Hills to keep the Indians undefeated and solidify them as the favorites in the Northern Conference.

Armstrong 48, Albert Gallatin 0
Armstrong ran back the opening kickoff for a touchdown then took full advantage of two early turnovers to run out to a 28-0 lead at the end of the first quarter.

Bethel Park 42, Shaler 7
Shaler got their first home win in 7 years last week then lost to Bethel Park on the road this week.

Thomas Jefferson 49, Indiana 14
The Jaguars continued rolling in their quest for a 4th straight WPIAL title.

Trinity 47, Ringgold 6
Ringgold had been shut out in their first 3 games and was able to put points on the board for the first time this season. However, Trinity still won handily for their first win of the season.

Blackhawk 48, Ambridge 6
The Bridgers ended the WPIAL’s longest losing streak last week, they ran into a buzzsaw in Blackhawk. The Cougars are now 4-0 and on top of the Northwest Eight Conference.

Knoch 28, Highlands 21
Knoch saw a 21-7 halftime lead evaporate in the third quarter, but Matt Goodlin scored his second TD of the night with 9 minutes left in the game to give the Knights their first win.

Beaver 21, New Castle 13
Beaver got out to a 21-0 lead in the first half and was able to hold off a comeback from the Red Hurricanes in the second half.

Aliquippa 62, Montour 0
Montour’s struggles continue as they move to 0-4 on the season. Aliquippa’s MJ Devonshire returned his SIXTH punt of the year for a touchdown.

Derry Area 48, Mount Pleasant 7
In an old-school rivalry game, Derry took it to Mount Pleasant to assert themselves as one of the top teams in the conference.

Burrell 61, Uniontown 6
With Ambridge winning last week, Uniontown now has the longest current losing streak in the WPIAL at 16 games. Burrell gets their first win of the season.

Yough 32, Deer Lakes 13
Dustin Shoaf ran for 5 touchdowns to carry the Cougars past the Lancers.

Hopewell 12, Waynesburg 7
Jay’Von Jeter ran for nearly 100 yards and a touchdown to carry Hopewell past Waynesburg.

Beaver Falls 25, Quaker Valley 14
After a dismal 2017, the Tigers are back and go into a big showdown with rival Aliquippa next week with an undefeated record.

North Catholic 14, Central Valley 13
The Trojans held on after a sloppy first half to get some big defensive plays in the second half to move to 4-0 on the season.

East Allegheny 34, Apollo-Ridge 7
This game was tied 7-7 at halftime but East Allegheny broke it open in the second half to run away with the win.

Shady Side Academy 56, Steel Valley 36
Steel Valley suffers their first regular season loss in 3 years. The Ironmen had battled back from an early deficit to tie the game at the beginning of the 4th quarter but the Indians ran away with it, scoring the last 20 points of the game. This win makes Shady Side the clear favorites in the Allegheny Conference.

Beth-Center 52, Southmoreland 26
The Scotties hung close for a while but the Bulldogs proved to be too much and ran away from them.

Washington 55, Brownsville 0
Washington has rebounded from their Week 1 loss to Charleroi with two dominant performances.

McGuffey 55, Carmichaels 0
The Highlanders kept their record unblemished thanks to a 35-point first quarter.

Mohawk 27, Freedom 21
Mohawk jumped out to a 20-0 lead in the first half and was able to hold on in the second half to deal Freedom their first loss. This leaves 4 different teams tied with 1 loss at the top of the Midwestern Conference.

Riverside 24, Western Beaver 0
Riverside got 2 touchdowns from senior RB LeMarcus Cleckley to lead them past the Golden Beavers.

Brentwood 28, Fort Cherry 7
Brentwood gets their first conference win as both schools are now 2-2 on the season.

South Allegheny 21, Seton LaSalle 7
South Allegheny lost a number of close games last year and has flipped that around into a 3-1 record this season. The Gladiators look like serious contenders for the playoffs in the Three Rivers Conference.

South Side Beaver 54, Carlynton 33
The Rams built a 32-20 halftime lead then got two second-half TDs from Brandon Barbers to stay well ahead of Carlynton in a high-scoring affair.

Shenango 34, Serra 33
Shenango booted a 38-yard field goal to score the only points of the 4th quarter and beat Serra for their first win of the season.

Imani Christian 32, Valley 25
After Imani ran out to a 12-0 lead, Valley battled back to take a 19-18 lead into halftime. After the teams exchanged third quarter touchdowns, Imani hit a 55-yard TD pass on 4th and 10 to pull away in the 4th quarter.

Sto-Rox 58, Cornell 6
Sto-Rox puts themselves in position to compete for a playoff spot with a win over Cornell. This was a big game in the race for the top three spots in the conference.

OLSH 37, Rochester 8
Tyler Bradley threw 4 TD passes, including one to Justin Walsh right before halftime to break the game open. Walsh then ran back a pick-six late in the 4th quarter to seal the win for the Chargers, who are now in control of the Big Seven Conference.

Union 39, Northgate 0
The Scotties ran past a short-handed Northgate squad to improve to 2-2.

Clairton 54, Riverview 0
Andrew Wiggins returned two interceptions for touchdowns and added an offensive score on a 50-yard run to keep the Bears undefeated.

Monessen 55, Jefferson-Morgan 0
With a win over California already in their pockets, Monessen continues their run of dominance this season in the TCS, moving to 3-0.

West Greene 47, Mapletown 0
West Greene ran out to a 47-0 halftime lead and cruised past the Maples to stay atop the Tri-County South.

Bishop Canevin 34, Springdale 14
Canevin moves to 2-2 on the season while Springdale falls to 0-3.

Jeannette 55, Avella 7
The defending 1A State Champions stay undefeated with a non-conference victory over Avella. This game will count for Jeannette in any Wild Card tiebreaking scenarios in 1A.

Laurel 37, California 14
This was a non-conference game, but California’s early struggles (after dominating teams last year) is one of the biggest surprises of 2018. 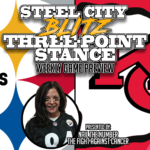