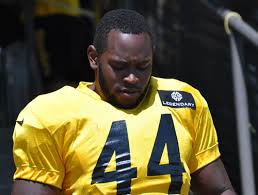 Steelers’ fans for many years poo-pooed Larry Foote at inside linebacker for the Pittsburgh Steelers and I understood their positions. Foote has never been a ‘splash play’ type of backer and has always been a bit undersized.

My argument in his favor has been that you cannot replace his knowledge of the Dick LeBeau 3-4 defense. He consistently gets guys in the right spots and makes sure he himself is where he needs to be.

With Foote lost for the season, the Steelers decided to, at least for last week’s game, move Lawrence Timmons to Foote’s ‘Buck’ linebacker position. The Buck is the strong-side backer. In his place, the Steelers rotated in Kion Wilson and rookie Vince Williams.

Both guys saw a decent amount of snaps, saw some failure and saw some success. For both guys, the number one thing to work on is getting off blocks and this isn’t surprising. This is often the most difficult thing to do for a young inside backer.

Bengals tackle Andre Whitworth had his way on several occasions with both young men driving them five and ten yards down-field. The good news is that I saw improvement from both guys as the game wore on. They started to read things just a little better and it showed in their presence around the ball.

The other area these two will need to work on is coverage skills. I saw several times where both guys got a bit too deep or a bit too flat in zone coverage leaving space for Jermaine Gresham and Tyler Eifert. Again, this is an area that will get better with experience and I think it will start this week.

The challenge for both Wilson and Williams this week will be getting a hat on Matt Forte both in the running game and the passing game. This is a task that even veteran backers have had struggles with so we must be patient.

As always with Dick LeBeau’s defense, stopping the run is job number one and the whole defense must do better following last week where they gave up over 100 yards on the ground.

I’m not ready to anoint Williams or Wilson the next great Steeler backer, but they seem to be on the right track to being serviceable defenders.

Steelers Need to Keep Le’Veon Bell on the Sidelines

Can the Steelers Learn From Today’s Final...