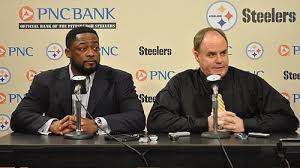 If you haven’t heard already, the Pittsburgh Steelers have traded a conditional late-round pick to Arizona for former first round pick offensive tackle Levi Brown. Mike Tomlin made no bones about the fact that Mike Adams was not getting the job down over the last three weeks and thus the rare in-season move was made.

If there is any good news from this move it’s this; According to Mark Kaboly of the Pittsburgh Tribune-Review, the Steelers can cut Brown who has a five-year $30 million deal, after the season with a very friendly cap hit.

Kaboly added that the Steelers will pick up the $3.35 million of his deal this year which means they are roughly one million over the cap.

[Update: Steelers are only on the hook for a vet minimum. Cards will pick up $3 million plus for rest of 2013]

That means the team will have to make further moves to get back under the cap and there are few viable options right now.

Money aside, this is a sign of desperate team and discombobulated front office. Brown was off to a pretty horrendous start in Arizona in 2013 and there were discussions as far back as week one about shipping him out. Sports talk radio in Phoenix today sounded more like a bon voyage party for guy never coming back as fans and radio personalities celebrated his leaving.

Correct me if I’m wrong here but when a trade is made, aren’t both sides supposed to be content at the very least with what they get and/or give up?

So how do we as fans take this move? As best as I can tell we should take it two ways and both are negative. By trading a valuable draft pick regardless of what round it is in tells us that Kevin Colbert is admitting he failed on Mike Adams. I wrote earlier this week that benching him was necessary for himself as well as for the team.

Whether Brown is ready to go for the Jets in 11 days is up in the air but he played for Todd Haley for two years so there should be some familiarity. At this point I would have to think he will rotate with Kelvin Beachum at left tackle while Marcus Gilbert holds down the right tackle spot. There was already speculation that they could look to move Brown inside to guard but the slow-footed former Nittany Lion might not fit real well there.

It sounds as though Ramon Foster’s pectoral injury was minor so he should be back for the Jets’ game.

The other way we take this move is that this is pure desperation on the part of a team that thinks it still can make the playoffs. It’s a fair way of thinking considering how average the AFC North is, but we need to be realistic. In order to get to just 8-8 this team needs to go 8-4 over the final 12 games and I don’t see that happening.

Since the day Art Rooney II announced the ‘retirement’ of Bruce Arians, something has been horribly amiss in the Steelers’ front office. Whether it starts and ends with Rooney II or heavily involves Colbert as well doesn’t matter because it’s perfectly clear someone is making decisions that don’t make sense.

The Steelers could have easily re-signed Max Starks for much less money and would have gotten a guy who already knows the system and wouldn’t be any worse than Adams or Brown. But now the Steelers are faced with more cap issues and those will only get worse in 2014 by the way.

This is a desperate move by a desperate front office that was shown up by the rival Ravens’ trade the day before. All is not well with this football team.

Steelers’ Butler Could Finally Be On the...

One Simple Reason the Steelers Should Avoid...

I think the front office is just in a state of denial. What scares me is the team seems to be desperately trying to fill holes on an old, creaky, sinking ship. I say you abandon ship, and start working on a new one!

The way the front office restructures contracts OVER and OVER drives me insane. We had a championship roster 5 years ago, and we restructured contracts to hold that core together as long as possible, and we’ve paid for the past couple of years by having virtually no cap space.

We went to 3 Superbowls, at the time it was absolutely the right decision. I’d take several years of top level football in exchange for some down years in between. But now they’re mortgaging the future to hold together this roster, and we’re STILL winless! That’s insane to me.

At this point the Browns are making better decisions than we are. They have some young talent to win games, and they’re still selling pieces to build towards a better future. Why are we not doing the same? I understand we’re probably not going to trade someone like Manny Sanders, fine, but at least don’t take on bad contracts. This offseason we need to part ways with Foote, Kiesel, Clark, COtchery and maybe even Ike.

Just accept that this team is not doing well, and do what you can to get them going in the right direction in the future. That means get guys that you see being here in the future some playing time (that means Jarvis Jones, Le’Veon Bell, Markus Wheaton, Vince Williams, Shamarko Thomas, Derrick Moye, Cam Heyward), even if they aren’t necessarily better than the starters right now. Figure out what’s working and what’s not working in the playbook.

I’m in agreement Chris and I have an article about this coming out today. At what point does the front office finally realize it just isn’t our year? After the fifth loss? The sixth? The seventh? State of denial is exactly right.