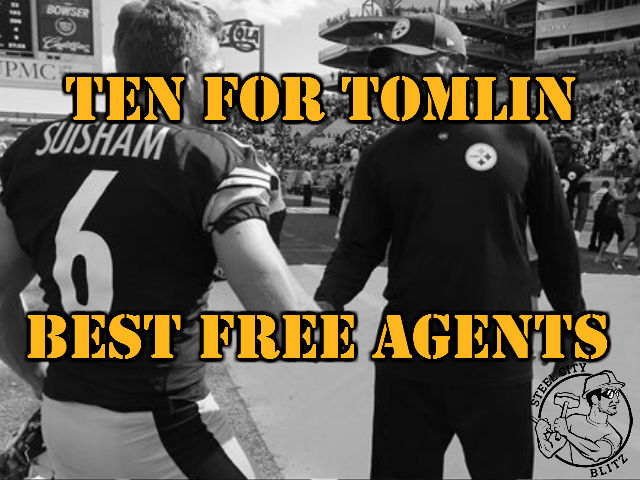 The 2017 Season will be Mike Tomlin’s 11th as the head coach of the Pittsburgh Steelers. With his decade at the helm, he is currently the fifth-longest tenured coach in the NFL. Only Bill Belichick, Marvin Lewis, Mike McCarthy, and Sean Payton have been in their respective positions longer than Tomlin. As we count down the days until the start of Training Camp and the start of the 2017 season, we’re taking a look back at Mike Tomlin’s 10 year tenure as Steelers head coach. The “10 For Tomlin” series will be 10 posts each featuring 10 items from the past decade. We started by looking at key statistics and recapping the best games and worst games. Yesterday, we turned our focus to the player-personnel side with the best draft picks. While drafts and free agency have been a collaborative effort between Mike Tomlin and Kevin Colbert, it is still worth recounting some of the best moves that were made.

When starting tackle Willie Colon tore his achilles in June of 2010, the Steelers brought in Flozell Adams to fill the role. Adams was an anchor on the right side of the line and played much better than Colon ever did. Adams’ play helped carry the Steelers to an appearance in Super Bowl XLV. He was released by the Steelers after just one season because they opted to re-sign Colon instead.

After the Sean Mahan disaster of 2007, the Steelers went out on the free agent market and signed veteran Justin Hartwig. Hartwig solidified the interior of the line through their run to Super Bowl XLIII. He was released by the Steelers in 2010 after they drafted Maurkice Pouncey.

As I’ve said numerous times on Twitter, Ross Cockrell should be thought of as the mulligan for the Dri Archer pick. Cockrell was taken 12 picks later by the Buffalo Bills but missed most of his rookie season with injury and was released. The Steelers claimed him on waivers and he has been a solid contributor for them ever since. He stepped into a starting role and has performed well with 2 interceptions, 2 fumble recovers, and a team-leading 25 passes defended over the last two seasons.

Allen was signed as a reserve safety and special teamer in 2010 and played on a series of one-year, vet minimum deals. He served as the primary backup for both Ryan Clark and Troy Polamalu during his tenure and was a special teams captain. Allen started 24 games with the Steelers, including 13 in 2015 after Troy Polamalu retired. Allen had 2 interceptions, 5 forced fumbles, and 4 sacks while excelling on special teams.

Mitchell was signed in 2014 after Ryan Clark departed for Washington in free agency. His first year was marred by injury that slowed him down. Once he got more comfortable with the defense and was healthy, he started to excel. In his second season in Pittsburgh, Mitchell had 3 interceptions, 9 passes defended, and 2 forced fumbles. He has a knack for coupling big plays with bad penalties and toes the line between aggressiveness and recklessness. Nevertheless, he has started all 48 games in his time with Pittsburgh and has been a consistent contributor on defense.

After the LeGarrette Blount disaster in 2014, the Steelers signed Williams in 2015 to be the backup to Le’Veon Bell. The Steelers did not know how much they would need Williams, but he proved to be worth every penny after Bell was injured in Week 6 in 2015 then was suspended for the first 3 games of 2016. In two seasons, Williams started 14 games and rushed for 1250 yards and 15 TDs. Most of those came in an outstanding 2015 season when he anchored the backfield by rushing for over 900 yards and 11 TDs. Unfortunately, Williams was injured late in 2015 and the Steelers had to go back to a running back by committee approach in the playoffs. He battled through injuries in 2016 as well but was healthy in the first three games when it mattered. Williams also proved adept as a receiver out of the backfield and finished his time in Pittsburgh with 1735 yards from scrimmage and 17 TDs.

In 2015, being a kicker for the Steelers was like being a drummer for Spinal Tap. Shaun Suisham tore his ACL in the Hall of Fame Game. Garrett Hartley pulled a hamstring in another preseason game. The Steelers traded for Josh Scobee and he was terrible. Enter Chris Boswell. All he did was come in and make 10 straight field goals and 29 of 32 his first season with his only misses coming from over 40 yards. In his two seasons, Boswell has made 87.7% of his field goals with only 1 of his 7 misses coming from inside of 40 yards. He has also converted 62 of 63 extra long extra points, the third highest percentage in the league among kickers who have attempted at least 10 extra points during that time. Boswell has been solid and consistent, everything you can ask for in a kicker. He has gone 4-for-4 three times, including in the 18-16 playoff victory over Cincinnati in 2015. He has also booted an incredible 6-for-6 twice, including the 18-16 playoffs victory over Kansas City in 2016.

Gay spent the first 5 seasons of his career with the Steelers then departed for Arizona in free agency. He was released after just one ineffective season with the Cardinals and re-signed with the Steelers. In his second tenure, he has accounted for a team-leading 7 interceptions (including 5 he took back for touchdowns), 3 sacks, and 3 forced fumbles. Gay has played both inside in the slot and in the outside corner role and has been one of the stabilizing forces in the Steelers secondary over the last four seasons.

After playing a year for the Bengals, the Steelers brought James Harrison back in 2014. He started 4 games that season and tallied 5.5 sacks. When Jason Worlids retired from football following the 2014 season, the Steelers had an increased need for Harrison’s services, and retained him for two more years. Harrison tallied 5 sacks in both 2015 and 2016 to break both the official and unofficial team records for sacks held by Jason Gildon and Mean Joe Greene, respectively. Harrison added an interception and 2 forced fumbles in both 2015 and 2016, proving that he is still capable of playing in this league. He led the outside linebackers in sacks in 2015 and led the team in sacks in 2016.

As Jeff Reed faltered in 2010, the Steelers cut ties and signed free agent Shaun Suisham as their next kicker. Suisham had been run out of Dallas and Washington and had a below 80% career conversion rate on field goals. All he did was come in and boot through 93% of his kicks the first year and convert over 90% in 4 of his 5 seasons with the team. All told, his 87.9% conversion rate was the highest in Steelers history among kickers with at least 5 field goal attempts. Additionally, he was perfect on all 173 of his extra point attempts.  Suisham stabilized the Steelers kicking game and his tenure with the team only came to an end because he tried to make a tackle on a kickoff return in a meaningless preseason game and suffered a career-ending injury. 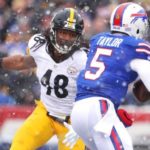