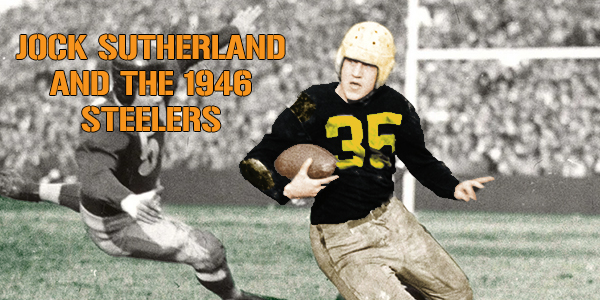 September 20, 1946 was a big day in Pittsburgh. As part of Pennsylvania week, the steel mill at Homestead held its first open house since the beginning of the war and attracted 40,000 visitors.

Many of those visitors would have bussed into the city in the evening for the opening game of the 1946 football season as the Chicago Cardinals played the Steelers. The game was a sell out and fans were urged not to turn up at Forbes Field without a ticket as they would not gain admittance.

The Sutherland effect saw advance season ticket sales reach $135,000, far outweighing the previous record of $21,000. Pittsburgh was once again primed for Sutherland football, but would he deliver?

The Steelers were seven-point underdogs as it was believed the Cardinals had invested wisely in new players and would benefit from the return of Coach Jim Conzelman from the war. “This team has good spirit – a new spirit,” Conzelman enthused. “We’ve got the toughest line I’ve had in professional football. They play for keeps.”

The pressure was on Sutherland to deliver, many enthusiasts predicting the Pittsburgh team would rise to the top of the NFL. Sutherland was more realistic about his team’s chances. “I have a fair ball club, but I won’t know how good it is until the game. The Cardinals, like all other league entries, are much stronger this year.

The game would pit the Steelers Bill Dudley against Chicago’s Marshall Goldberg, a Sutherland prodigy from Pitt. The scene was set for Sutherland to return to the field with the Steelers where he began his outstanding Pitt coaching career in1924.

On a rain drenched muddy field, the Steelers kicked off the Sutherland era under floodlights with a 14-7 win. The Steelers capitalised on a recovered Chicago fumble and a partially blocked punt for their scores. Bill Dudley received the credit for leading his team to victory.

One sports reporter wrote of the game, “The thing that impressed me the most about the contest was not the play of any individual, or of either team. It was the crazy crowd that filled Forbes Field in Pittsburgh. Rain began falling in mid-afternoon and continued a steady downpour until the final quarter. Yet, nearly 34,000 men, women and children, most without cover, sat to the end cheering for the Steelers. This was a tribute to Jock Sutherland.”

For their next game, the Steelers would travel to Washington where they would play a Redskins team, who had lost in the championship game the previous season. It would provide a real test for the Steelers and Sutherland would have to prepare a defense to stop the aerial assault from Redskins star quarterback Sammy Baugh.

Sutherland stuck to a single wingback with an unbalanced line to the right to enter the contest against the T-formation of the Redskins.

The Steelers were outclassed for three quarters when they gave up two touchdowns but fought back to tie the game. With seconds to go, Bill Dudley missed a 25-yard field goal that would have sealed his team’s second win.

For the third straight game, the Steelers were underdogs against their next foe, the New York Giants. Another sell-out crowd saw the Steelers fall behind 17-0, but this time the comeback failed when they lost 17-14. Six Pittsburgh fumbles swung the game in New York’s favor.

His first defeat as the Steelers coach did not faze Sutherland. “I’m proud of this Steeler team,” he said, “and I know they played their best. I can’t ask for anything more. It was by far our best game of the year.”

For the October 13 game with the Boston Yankees, portable bleacher seating was installed at Forbes Field as another sell out was expected. Dudley received the praise again for leading his team to a 16-7 win as the Steelers scored sixteen points in the second quarter to build a lead that took them to the victory.

The following week the Steelers travelled to (1-2) Green Bay where they led 7-3 going into the final quarter. Two late Packers touchdowns spoiled the party as the Steelers lost 17-7 despite Dudley carrying 17 times for 133 yards as he scored all his team’s points.

The Steelers continued with back to back wins. After easing past the Yankees 33-7, Pittsburgh brushed aside the Redskins 14-7 in front of a record 39,060 crowd. Washington’s Sammy Baugh threw two interceptions that led to Pittsburgh scores. Dudley returned the first 80 yards for a touchdown while in the fourth quarter, Charley Seabright’s interception set up Steve Lach for a 6-yard touchdown run.

A trip to (0-6) Detroit was expected to extend Pittsburgh’s streak. After the Lions took a 10-0 lead in the second quarter, Bill Dutton gave the Steelers hope with a 12-yard touchdown run, but a Lions score in the final quarter gave them a 17-7 win. The Lions smothered the Steelers offense with Dudley struggling with 6 yards from 10 carries.

Despite the Steelers defeat seeing the promise of playoff football fade, a large crowd turned out in Forbes Field for the battle of Pennsylvania as the (4-3) Eagles arrived in town. The Steelers provided the thrills as they entered the fourth quarter seven points behind.

Another Dudley interception set the Lach up for a short touchdown run that tied the game 7-7. With less than a minute remaining, Dudley’s 14-yard field goal gave the Steelers the win and a faint revival of their playoff hopes.

Consecutive defeats at New York (7-0) and Philadelphia (10-7) saw those aspirations wiped out, but the Steelers 5-5-1 season had shown promise. It ended with the news of Bill Dudley’s retirement.  He was carried from the field after the Eagles loss with a torn cartilage and decided to quit.

“I know my limitations,” Dudley acknowledged. ”I’m just not big enough to take such a beating as this league calls for in a key player.” His teammates didn’t believe he would retire and that his love for the game would return when he recovered.

Dudley was the NFL’s leading rusher for the season and such an important part of the Steelers’ offense. How would Jock Sutherland deal with his absence? Join us again next week in SteelerCityBlitz to find out if the Steelers could continue to progress with Sutherland at the helm. 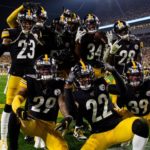