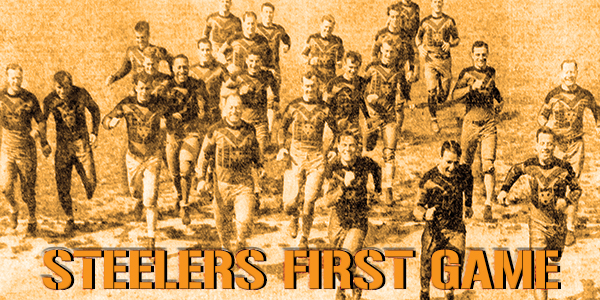 When the Pittsburgh Steelers entered the NFL as the pro football Pirates in 1933 there were three daily newspapers in Pittsburgh. Most of their sports pages would be smothered with news of the Pirates baseball team and the city’s college football teams.

Art Rooney’s football team initially struggled to pinch any column space from the city’s newspapers that were super generous in their baseball coverage. The build-up before the city’s first pro football game against the New York Giants saw the exposure by the local press increase modestly.

The Pittsburgh Sun-Telegraph acknowledged the huge task Pittsburgh would face in the pro league, “The Pirates opening test against the formidable New York Giants is about as tough a setup as could be arranged. Boasting such stars as Harry Newman, former Michigan star; Ken Strong, N.Y.U. luminary of a few years ago and Reb Russell, who starred at full back for Nebraska and Northwestern, the Giants are preseason favorites to cop the league title.”

The Post-Gazette must have been fed the same publicity sheet from the Giants and echoed those ominous observations.

Hopefully, between their practice drills at Greenlee Field, the Pirate players didn’t have time to read their two weeks of training would not prove to be a fruitful use of their time.

The Pittsburgh Press printed a thumbnail bio of each player. They added a handy guide to the difference in the collegiate and professional rules. As it was the first pro game in a city that had enjoyed collegiate football for so long, it was a valid inclusion for any fan going to the game.

Player/coach Forrest Douds spoke realistically of his team’s chances.  “We have boys just out of college who are strong and fast and imbued with confidence and the desire to win.” Douds also added some hope, “Along with these we have some experienced play in Tony Holm, Elmer Schwartz and Bucky Moore. True, we are new to the game, but we are confident of holding our own even with the powerful Giants as opposition in the first game.” 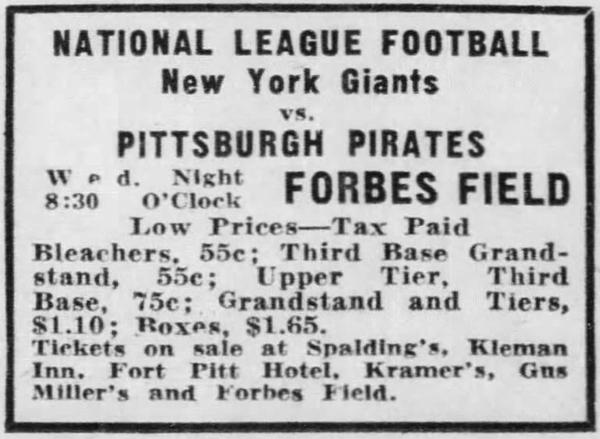 The Pittsburgh Steelers vs the New York Giants; September 20, 1933

A crowd of 20,000 turned out to watch the versatility of New York’s rookie Harry Newman expose the fragility of Pittsburgh’s debut in the league. He scored one touchdown on a 4-yard run, kicked the extra point and added a 37-yard field goal in addition to throwing a touchdown pass to Dade Burnett.

The home team held their opponents until the second quarter when an Angelo Brovelli interception set New York up for the first score after Ken Strong returned it 34 yards for a touchdown.

Poor punting by Brovelli and Ray Tesser was blamed for losing Pittsburgh many yards although a long punt by Tony Holm in the third quarter pushed the New York back to their goalline. When the Giants went to punt out, John Oehler blocked the attempt and registered a safety that provide Pittsburgh with their only points of the game.

In the final period, the Pirates began to wilt as the Giants controlled the exchanges. A Pittsburgh fumble led to Newman’s scoring run and his touchdown pass came in the closing minutes as New York triumphed 23-2.

The NFL commissioner Joe Carr, who was present for the game, told Coach Douds, “You’re not going to win any championship, but you have a fine foundation to build on.” True words that would last four decades.

The Sun-Telegraph suggested the contest was a financial if not an artistic success noting the disappointment of the fans in defeat would have been outweighed by the thrills provided by the Giants.

The Giants went on to have a successful season before losing the championship game 23-21 to the Chicago Bears.

Pittsburgh’s introduction to pro football was no fairy tale story as they finished the season 3-6-2. Art Rooney replaced Douds as coach although he stayed and played one more year with the team. 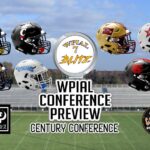 SCB Steelers Quick Hitters: The “All is Well” Edition