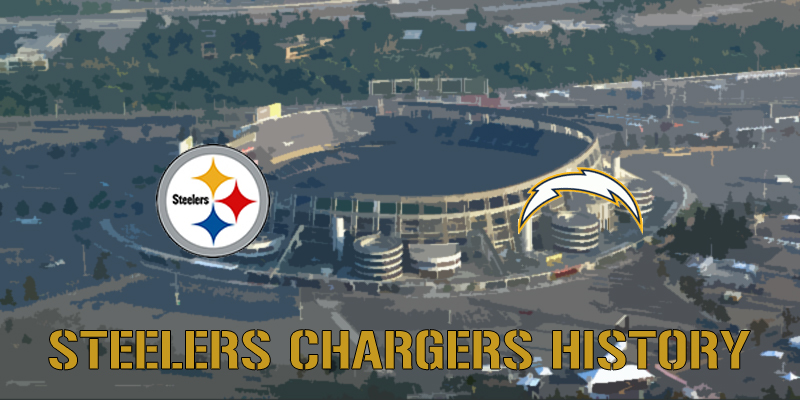 The Los Angeles Chargers were one of the founding members of the American Football League which was formed to rival the NFL in 1960 by owners that had to be loaded to fund their franchises.

The Chargers’ franchise was owned by hotel heir Barron Hilton and after originally putting the team in Los Angeles, he decided to move it to San Diego after one season. Hilton reasoned the team couldn’t compete financially in the same market with the LA Rams.

After the AFL merged with the NFL in 1970 when the Steelers began playing the Chargers, Pittsburgh won the first six contests. Overall, the Steelers own a record of 24-10 including 9-6 on the road, inclusive of the fun game with Duck Hodges at the helm.

In 2015 the Chargers decided to move back to Los Angeles after their current owner, Dean Spanos, determined that sharing a stadium with the Rams would enable them to compete financially with the rest of the league. It’s always about the money.

This week’s spotlight on the Chargers looks at the 2005 season when Steeler Nation were relishing a second year of the Ben Roethlisberger era.

The Steelers enjoyed a very early bye week that year to prepare for the game and produce a defensive plan that centered around stopping Chargers’ running back LaDainian Tomlinson. “He’s the best playing right now and one of the best ever,” acknowledged Steelers’ defensive coordinator Dick LeBeau of Tomlinson.

Coach Cowher echoed the sentiments, “He is the guy who’s the catalyst for them. You have to stop Tomlinson.” In the Chargers previous two games before playing the Steelers, Tomlinson rushed for 326 yards with five touchdowns.

In a scoreless first quarter, it was Tomlinson who took the only honors. On the Chargers’ second possession, he went right end for 9 yards before gaining 7 yards on a run up the middle after first breaking a Kimo von Oelhoffen tackle behind the line of scrimmage.

In the second quarter, the Steelers’ defense tightened while Ben Roethlisberger woke the offense up.  Using Jerome Bettis to complement his passes, Roethlisberger led his team 77 yards on 10 plays before running 7 yards on a draw play for the touchdown. 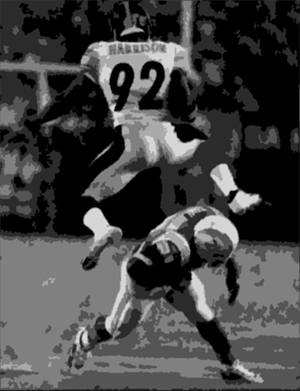 In reply, with Drew Brees at quarterback, the Chargers moved the chains to the Pittsburgh 35 before a James Harrison interception brought their drive to an abrupt end. After hurdling Tomlinson, Harrison’s return of 25 yards saw the Steelers start their possession on the Chargers’ 41.

Willie Parker contributed 14 yards on a run as the Steelers took advantage of the turnover finishing with a touchdown run of 1-yard from Bettis.

A kickoff return of 48 yards to Pittsburgh’s 47 presented Brees with a short field. A 13-yard Tomlinson run and a 23-yard pass to Eric Parker set up a Brees’ touchdown pass of 11 yards to Antonio Gates. The first half finished with the Steelers 14-7 in front.

The teams exchanged possessions at the beginning of the third quarter before Chargers’ Nate Kaeding kicked a 34-yard field goal to reduce their deficit. Kaeding kicked another field goal from 32 yards which saw the Steelers defend a slender 1-point lead going into the final period.

As both defenses continued to dominate, San Diego kicked a 41-yard field goal that edged them 16-14 ahead.

Steelers’ Quincey Morgan returned the ensuing kickoff 37 yards and Roethlisberger entered the field to begin a drive from Pittsburgh’s 38. Two passes to Hines Ward of 33 and 13 yards set up Heath Miller who hauled in a touchdown catch of 16 yards that saw the Steelers restore a five-point lead.

As Brees fired up the Chargers on their next drive, Tomlinson began to find his feet. He provided 25 yards on five carries as San Diego moved the ball 68 yards on 12 plays before he burst through for a 2-yard touchdown. In an attempt to make it a three-point game, the Chargers went for a two-point conversion, but Tomlinson’s attempt was smothered by the Steelers’ defense.

With less than five minutes remaining and the game looking out of their reach, the Steelers began a drive on their 38. Roethlisberger used Bettis to wind the clock down while completing passes to Miller, Ward and Antwaan Randle El to move the chains.

Roethlisberger was forced to leave the field after being hit on the knee by an opponents’ helmet, but he had led his team to within field goal range. With just 10 seconds remaining, he stood on the sideline and watched Jeff Reed kick the 40-yard field goal to take the Steelers’ victory.

The Pittsburgh Steelers 24 at the San Diego Chargers 22

The Steelers held Tomlinson to 62 yards on 18 carries. “That was probably the best defense I’ve faced as the run game in my career,” Tomlinson offered. His compensation was setting an NFL record by scoring a rushing touchdown in 17 straight games.

“That was a classic football game,” suggested Coach Cowher of a game that was always in the balance and won on the final series. “I think we were just fortunate enough that we had the ball last.” On the Steelers’ two-point conversion stop, Cowher admitted, “I thought that was huge.”

The win continued the story of a young quarterback on his way to a championship game. Out with his knee injury, Ben Roethlisberger was replaced by Tommy Maddox in the Steelers’ next game. He returned in week seven to lead the team to a 11-5 season that finished with a win in Super Bowl XL.

Steelers Are In a Free-Fall Just Three...

T.J. Watt is Skyrocketing Up the Steelers’...