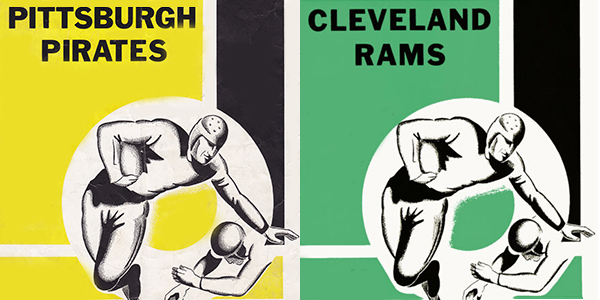 The Piitsburgh Steelers and Cleveland Browns rivalry may have been overtaken by the present competition with the Baltimore Ravens, but I’ve always taken a keen interest in Pittsburgh’s duels with Cleveland.

My first adventure across the Atlantic to see the Steelers in 1993 was to see a win against the New Orleans Saints in Three Rivers Stadium before travelling to the mistake on the lake for an unbelievable loss in Cleveland.

Why unbelievable? The Steelers took a lead in the fourth quarter, only to lose the game when Eric Metcalf returned a punt 75 yards for a touchdown. You never forget the pain when your joy turns to misery. The journey back to Pittsburgh didn’t make the ache disappear and almost three decades later, I’m still in remorse.

So, now you understand my keen interest in the rivalry, let’s look at where that competition began.

Cleveland’s attempt to kick Pittsburgh out of the NFL

The early days of professional football were a roller coast ride for owners and players. Teams would appear, disappear, and move cities and towns. The NFL came into being in 1920 when owners of fourteen teams organized a league bound together by the same rules.

Despite none of the teams surviving in their original form, the organization went on to become the senior and most stable football league that we all know and love.

Every Steelers’ fan is aware of the year their team was established. The legend of Art Rooney winning at the racetrack and purchasing the Pittsburgh franchise in 1933 has become part of Steelers Nation folklore.

Pennsylvania and Ohio were strong football regions in the industrial north east and watching football became a means to escape from the steel mills, factories, and coal mines. Sandlot football flourished and as the country started to emerge from the Great Depression, professional football gradually evolved into America’s favorite sport.

Four years after the Steelers became part of the NFL, Cleveland came back in with another team. The Rams had been part of the new rival American Professional Football League in 1936 and moving to the NFL ensured some stability.

The rival teams were scheduled to face each other for the first time in 1938 on October 16.

The Pirates lost 17-7 to the Brooklyn Dodgers the Sunday before the scheduled Rams game. The following day, Art Rooney sold three of his players. Local newspapers suggested the owner had given up on the season. Poor crowds were not funding his team and he acknowledged, “I wanted a winner this year so I paid some pretty fancy salaries. The team is the highest salaried in the league.”

Out of the $6,400 taken at the gate for the Dodgers’ game, Art Rooney paid them the league guarantee of $5,000 which left little for the high salaries of his players.

As well as losing players for cash, they lost three players for the season with injury and one player was reclaimed by the Bears. 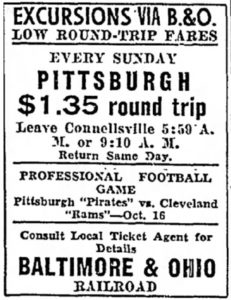 Two days after losing to Brooklyn, the Pirates got thumped 27-0 by the Cincinnati Bengals in an exhibition game. The Pirates then announced the postponement of the Rams game.

The deferral did not go down well with the Rams. Their president Thomas Lipscomb sought to have the Pirates thrown out of the league. “I have wired every club owner in the league asking that the Pirates be ousted,” Lipscomb said. “I also have taken up the matter with the league’s president, Joe Carr.”

After winning back to back games, the Rams were on a roll and Lipscomb was furious about the impact the interruption would have on his team. “I personally think Rooney is a swell fellow, but this postponement of the game is a terrible blow to us,” Lipscomb protested. “Our team has been going ‘hot’ and we don’t want them to cool off.”

In defending his request for an adjournment, Art Rooney suggested, “It’s been done in the league often. I have done it myself and the major league baseball clubs do it. It’s a darn funny thing. Two years ago, I was instrumental in getting the Cleveland team a franchise.”

Within 48 hours, the rift had been resolved with both teams agreeing to reschedule the game for December 4 in Chattanooga as a benefit. Lipscomb admitted, “Joe Carr pointed out the far reaching effects of revoking a franchise so I backed down.”

The Rams won their next two games against the Bears before losing the following five. With nothing at stake when they played the rescheduled game, the Rams beat the Pirates 14-7 before less than 8,000 fans which would have been a season low for a Pittsburgh home game.