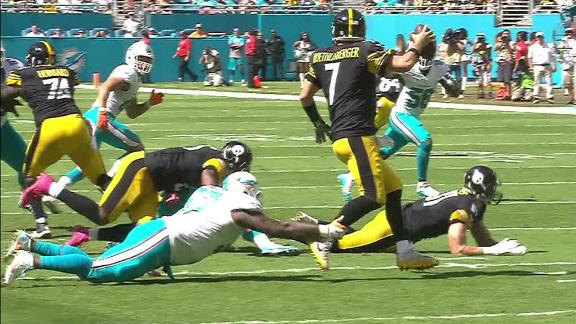 By now Steelers Nation is well into “the sky is falling” mode, after an ugly loss in Miami and news late last night that Ben Roethlisberger will be having surgery Monday to repair a torn meniscus.

I’m not excusing the coaching staff for the loss yesterday. I think that 10 carries for Le’Veon Bell against a very suspect rush defense is just inexcusable. I think that Bell could have carried the team on his back yesterday, put up some more points than the team did, and in the process could have sustained some drives in a game that saw Miami edge the Steelers in time of possession by 13 minutes.

All of that being said, the Steelers, thanks to some luck are still not in a horrible position when it comes to the big picture of the season.

It’s not an excuse, but nobody can deny the Steelers are banged up right now, and at some point those injuries can become too much to overcome. For all, or parts of Sunday’s game the Steelers were without Ben Roethlisberger, Ladarius Green, Sammie Coates, Markus Wheaton, Marcus Gilbert, Cam Heyward, Stephon Tuitt, Ryan Shazier, Vince Williams, Bud Dupree, and Mike Mitchell. That’s not just a lot of names, that’s a lot of important names.

With Ben out next week, and the Patriots coming to town, it’s safe to say this team will likely drop to 4-3 going into the bye.

That’s all of the bad news, so what’s the good news? No serious injuries.

While the Steelers have been just decimated with injuries lately, they’ve been lucky that very few of them have been of the very serious nature. So far, it appears that Senquez Golson and Ryan Harris are the only significant depth players that will miss the entire season.

Personally, I am hoping that the Steelers don’t play a single dinged up player this Sunday against the Patriots. With the bye seemingly coming at the perfect time, the team can give guys like Ben a full 2 weeks of rest; or even 3-4+ weeks in the case of some guys like Shazier and Gilbert.

If all goes as planned, the team is going to have 2 weeks to prepare for a huge division game against the Ravens and if there are not setbacks, should have Roethlisberger, Coates, Wheaton, Green, Gilbert, and Shazier back on the field. Heyward’s hamstring worries me a little bit but there’s a chance of him returning as well.

If Ladarius Green practices this week, the Patriots game would be a good game to get him into and get some live games reps before getting up to speed through the bye and maybe be ready to make a real impact against Baltimore.

Want some other good news? The AFC North title is still very attainable.

The worst possible outcome is the Ravens beat the Jets next week (then have their bye), the Bengals win the next 2 against the Browns and Redskins and the Steelers lose to the Patriots. In that scenario the Steelers and Ravens would sit at 4-3 and the Bengals 4-4.

All things considered, that’s not a bad position to be in, with a team at nearly full strength for the second half of the season.

The bad news is that the Steelers once again put themselves in a hole when it comes to seeding in the AFC, and as we’ve seen now the team probably needs to play at home to have a chance at making a strong playoff run. That being said though, you never know what might happen.

The strong AFC West could beat up on each other enough to keep any one team from piling up too many wins. Nobody in the AFC South is winning more than 10 games. The Patriots are probably a lock for the 1 seed assuming Landry Jones doesn’t pull off a miracle next week but you never know what might happen with some tough games left like home against Seattle, on the road at Denver, and still have to travel to Buffalo where Rex Ryan’s defense is looking stronger every week.

Things feel bad right now, and after what’s almost certainly going to be back to back losses next week it’s going to feel even worse… but with the bye feeling like it’s coming at the perfect time, I think the second act of this season could be where the team build momentum going into the playoffs.

Honestly, right now I still feel like the division crown should be the Steelers’ this season. They need to come out very strong to have a chance at improving their playoff seeding though. 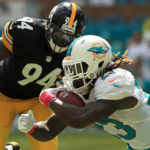