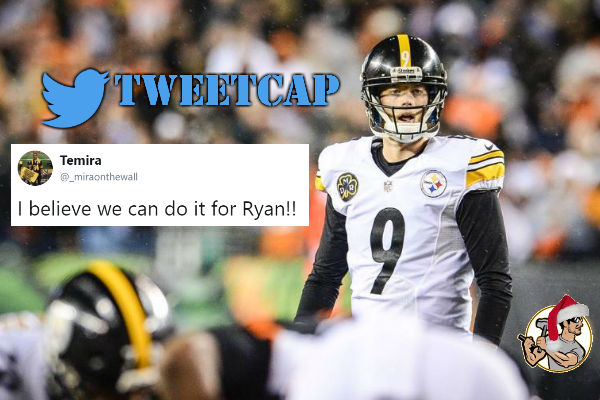 The Steelers went into Cincinnati on Monday night and clashed with the Bengals in an ugly display of what I guess amounts to football. The Steelers got the victory but it was overshadowed by a scary moment in the first quarter when Ryan Shazier was carted off the field after making a tackle. All thoughts and prayers are with Ryan and the Shazier family. After that, it was hard to stay invested in the game, and the reactions were similar across the twittersphere (with the exception of Bengals fans).

It wouldn't be a late game without me complaining about it. Sunday's at 1:00 pm is when the NFL was meant to be played

Bengals and Steelers, Monday Night Football. Now here’s two teams that just flat out don’t like each other, man. They’re like McDonald’s and Burger King. I love Big Macs and I love Whoppers so this should be fun

How about that toe…#Steelers first down to AB. Great back shoulder throw.

Unfortunately it ended quickly when Ben threw a pick and Burfict flopped after he initiated with Bell.

Ben is picked by Pacman.

Not the way to start this freaking game.

To make matters worse, Shazier got hurt on a tackle.

Shazier’s back. Man, it was a weird type of tackle. I hope he can walk off. ?

Can we restart this game?

Lets come together and say a prayer for Shazier. Hope he is okay

This is the kind of injury that takes the wind out of the game a little bit and rightfully so. This is scary.

It’s tough to get into the game after a gruesome injury like that. But the Steelers held the Bengals to a field goal and kept grinding.

That injury just sucked all the life outta this game for me dawg. Can’t front.

Don’t really much care right now about this game. I give these players credit.

I don’t know players-can continue to play after watching Shazier carried off on a stretcher and now in ambulance— certainly makes watching harder to do ????

The Steelers gave up a touchdown to AJ Green, but it was still hard to care about anything other than Shazier.

Evaluating #steelers defense on TD drive useless. Players are pros, but they’re human. See a teammate go off like Shazier did, players can be forgiven for being staggered emotionally.

Winning this game seems so unimportant since Shazier’s injury. Must really suck for the players.

Colbert talking to Tomlin on sidelines. Not normal.

Was Colbert updating the medical staff or was the staff updating him? Huge difference.

FINALLY!! BROKEN UP PASS DEEP ON 3RD DOWN!!

You can tell the #Steelers hearts and minds aren't into this game. #MNF

This is easily the most physical game of the entire NFL season. I’m fully convinced

The Bengals drove down the field and scored again before halftime. Another AJ Green touchdown.

Obviously Shazier's injury sapped PGH emotionally. But his physical absence has had nothing to do with PGH's inefficiency offensively, nor does it have anything to do with the fact that the defensive depth at other positions is being exposed.

The Steelers finally found some life with a screen pass to Le’Veon Bell and a pass interference call on AB to get them into field goal range.

Best play of the night so far

The Boz's kick is good. Steelers trail 17-3 at halftime. #Steelers

And the Offense comes to life in 3 plays 3 points. #HereWeGo

The Steelers did make one halftime adjustment, benching Coty Sensabaugh in favor of rookie Cam Sutton

IF TOMLIN BRINGS THIS TEAM BACK AFTER THIS HE DESERVES COACH OF THE HEAR.

Steelers rookie CB Cam Sutton replaces Coty Sensabaugh, who was torched in the first half

The Steelers came out and started working their way down the field.

Burfict hurting himself is poetic.

On a quintessential Bengals play, Ben checked down to Le’Veon who scampered down the sidelines and got pushed by one Bengal but never went out of bounds. The defense all stopped and Bell walked into the end zone.

It's the Bengals#HereWeGo 10 unanswered points

The Bengals struck back by converting a 3rd and 16 after a touchdown was called back on a hold.

This looks like the Steelers secondary we saw in New England.

Dalton is playing out of his ass tonight.

The Steelers were able to hold to a field goal.

The refs gave the Bengals a make-up call for the holding that nullified the Green touchdown by throwing a flag on a Martavis Bryant kick return that nullified a 96-yarder.

NFL has no idea what holding is and it's part of the ratings decline.

Kudos to the ESPN crew for calling out the poor officiating. Need more of it.

McDonough has ripped two separate holding calls and been right both times.

The real reason I can't stand ESPN? They support the most provocative, despicable, and cruelest of players (Manziel, Burfict, etc.) just so they can have chest-thumping idiots like Gruden employed to spill bombast. Hire some real analysts and support players who do things right.

Tomlin tried to challenge an AJ Green catch that may have been a catch and a fumble, but no one knows what a catch is, so it stayed as an incomplete pass.

Good challenge whether Tomlin wins it or not. Take the shot.

Dumb challenge. It was a catch but in today’s NFL – no way will they call it a catch.

AJ Green took 3 steps with the football but it's incomplete cause no one knows what a catch is, but keep bitching at Tomlin. God

Unbelievable waste of a challenge. Might need that timeout.

The defense held, but guess what? More flags.

if every punt get a penalty, why even bother having punt returns?

They're out of control with the flags already. Terrible officiating crew. #MNF #steelers

Randall Gay? Antonio Bryant? Martavious Bryant? What the hell is Gruden on tonight? Maybe he is going to Tennessee.

The Steelers got out of the shadow of their own goalposts and faced a 4th and short at the 40. Tomlin went for it and Le’Veon ran over Dre Kirkpatrick.

NOOOOOO BELL DID IT AGAIN TO KIRKPATRICK

That was some grown man football.

This is the most violent game of the year

Even AB making uncharacteristic mistakes tonight. Team wide issues in this one

How, in the name of all that is holy, is that not pass interference but the other one was? I’m literally confused

The defense stepped up and got their first sack of the game with Vince Williams blowing through the line.

The Steelers held to a punt but guess what? Another holding penalty.

Wilcox gets called for another hold. Far away from the play. Very expensive special teams player making some bad mistakes in this game.

I think the bengals are playing their version of Renegade. It's Bad Company. Wow.

The Steelers got the ball with 80 yards between them and a tie game and got a gift to start.

Ben got a roughing the passer penalty? pic.twitter.com/LsCd84yU6x

BEN GOT A ROUGHING THE PASSER CALL

153 penalty yards on the Bengals and yet only 13 pts

That block is the Hines Ward in Juju. Can't stand over the guy though. Hurt the team. #Steelers

Gruden spent the entire game praising the dirtiest player in the league.

Burfict had that coming and more. Don’t wanna hear it. Worth the 15 yards, easily. A bargain at twice the price.

Vontaze Burfict has tried to end players careers and been endlessly dirty, but now this is “bad for the game”….give me a damn break.

Trying to equivocate JJSS hit and Shazier's injury (on a routine looking tackle) is idiotic. Totally different.
But sure, let's shame a 21 yo while lionizing a dude who's been suspended … hell, I lost count.

The Steelers got into the red zone and converted a third down. On the next play, Ben hit AB in the back of the end zone for the game-tying score.

And this is the dirtiest NFL game in years.

Holy moly. How on earth is Gruden finding the strength to continue on with this game? Or is he commentating from the locker room at the bedside of Burfict?

They acted like JuJu committed assault because of a blindside block against the NFL's dirtiest player. AB just got speared in the head and it was barely mentioned.

The defense came up HUGE with a third down sack by Dupree and Tuitt on a 3-man rush.

BIG SACK BY THE D

My reaction to shotgun on 3rd and 2: pic.twitter.com/2ovLir6TWn

Bud Dupree got a sack pic.twitter.com/DIcX4RFzZp

A mediocre punt gave the Steelers the ball at their own 40 and Bell got across midfield at the two minute warning.

Anyone surprised by the fact that the Steelers are in position to win hasn't paid attention to the Marvin Lewis/Andy Dalton era of Bengals football.

Marty with a big time catch

BELL IS A GROWN MAN!! TOOK A MAN WITH HIM WHILE IN MIDAIR!

Boswell came on and DRILLED a field goal FOR THE WIN.

I LOVE YOU BOSWELL

Boswell from 38 is GOOOOOOOOD!!!

THE STEELERS COME BACK TO DEFEAT THE BENGALS 23-20!!#HereWeGo pic.twitter.com/nbrd9yKbwm

CHRIS BOSWELL WITH HIS THIRD WALK-OFF IN FOUR WEEKS