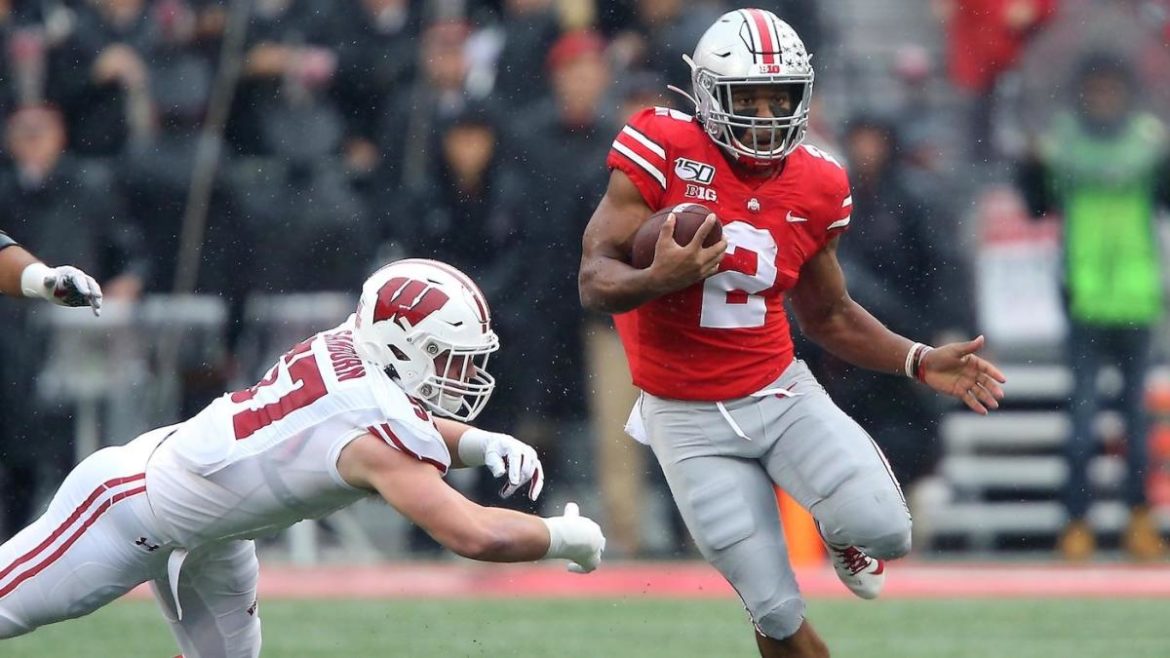 Welcome to the second installment of my mock drafts for the Steelers for 2020. The first mock draft is available here. That one was done just after the combine. This one now comes to you with the first week of free agency behind us so I take into account the losses and gains the Steelers have incurred.

Notes: Efficient, low-to-ground ball carrier who has no problem being the main man in the backfield. Dobbins isn’t going to be overly cute or flash a lot of moves but he moves forward using strength and vision to gain yards. He has proven that he can show up big in big games too. The really nice thing here is that if Conner is healthy then there is less pressure on him to have step up immediately.

Rationale: It flies in the face of what I believe teams should do with running backs these days but the Steelers can’t pass on Dobbins. I like James Conner as much as anyone but he just isn’t dependable week-to-week. Dobbins immediately steps in as a three-down back and probably makes Conner even more valuable as his load won’t be as heavy yet he still can provide pop. Dobbins can thrive in the Steelers’ offense for four seasons then they can decide from there.

Notes: This guy was a four-time All Big-12 player, one of few who can say that, who is a tackling machine. He reads and diagnoses things very well and is able to make a ton of solo tackles. Will need to work on getting off blocks and finding his place in zone defenses but he should be an immediate star on special teams and work his way into a reserve role with a potential future as a starter.

Rationale: With Mark Barron cut loose and Tyler Matakevich off to Buffalo, the Steelers are really thin at inside backer. We do not yet know how much they like Ulysees Gilbert, a late round pick last year, but either way they have to rebuild the depth and Brooks can help. There’s some question about where he fits but many see him as inside backer. He has some work to do in terms of his coverage skills but the athleticism and work ethic should help him build those skills.

Notes: This, my friends, is a large man. His heavy hands, thick lower body and massive arms will be a pain in the rear for any offensive linemen looking to move him. He’s got a very good motor and his above average athleticism will require double teams to deal with him on a regular basis. He should have no problem keeping the linebackers behind him clean.

Rationale: With Javon Hargrave gone and Dan McCullers not much of a threat, the Steelers still need a guy who can anchor down the middle on early downs against the run. Fotu is bigger than typical nose tackles at 6’4″ but the former rugby player is also 320lbs and moves well for a man of this size. The Steelers appear to be fine with their ends but need added bulk in the middle and Fotu fits the bill here.

Notes: Asiasi was a bit of diamond in the rough for draftniks because prior to 2019 he only had a handful of catches. What he displayed however was speed and athleticism that wasn’t previously untapped. He excels down the seam and does a very nice job of finding open spaces against zone coverage as well. His blocking technique needs work but you see the effort and the willingness on tape.

Rationale: Wait! We just signed Eric Ebron! We sure did so let me explain. Ebron is not a good blocker. Current third tight end Zach Gentry is not a good blocker either. Vance McDonald is a pretty decent blocker but unless he has a spectacular 2020 season, he’s likely gone. I still view tight end as an area of need because the honest truth is you have to have capable players there who can both catch and block.

Notes: Muse is solid athlete with good, straight-line speed and solid ball skills. His size might allow him to slide into a nickel-backer type of role as well due to his excellent tackling and ability to diagnose things. He has coverage limitations as a safety but he’s going to be a core special teamer for sure.

Rationale: The Steelers have to build their depth at safety with Sean Davis gone and not much else behind Minkah Fitzpatrick and Terrell Edmunds. I think Muse is more LB than safety but in a pinch he could be effective.

Notes: Coughlin is a high-energy guy with good speed and he has an excellent mind for the game. He had a plethora of tackles for loss while starring for the Gophers. Despite being just 240lbs he’s surprisingly strong and uses that strength when he doesn’t come with speed on his pass rush. He’s definitely got work to do a run stopper but I don’t think that’s a concern early in his career.

Rationale: Anthony Chickillo and his five million dollar salary were rightfully cut but the team could still use a replacement for him on special teams and potentially as a situational pass rusher.  Achieving anything more than what I described would be a massive step for him.

Steel Dad,this is the best draft for Steelers i have seen yet nice job.

Steel Dad,this is the best draft for Steelers i have seen yet nice job.I love Jk Dobbins add him Ebron Ben back to offense .now we are talking with this defense 11-5.

Thanks Ronald! Due to their lack of picks I couldn’t cover everything I think they need so I tried to get as close as I could.

The Steelers have only 1 offensive tackle signed for 2021 and they will especially need help at LT. I think this should be their highest priority in the draft.

In my first mock draft I had us taking Austin Jackson, OT from USC. With the signing of Wisniewski I think they keep Feiler at tackle unless Banner or Chuks really come on. I’m with you though, would not mind seeing us grab an OT at all.

Yeah I got a major issue with your mock draft. Your like every other fan looking to add to a position where there is no room to add. The Steelers have Conner and Snell and should they need to employ a 3rd RB then there going to play Samuels and if not him then Whyte so where exactly would Dobbins fit in the RB room?

Yes you need TE’s that can both block and catch but to simply write of Gentry after 1 year is foolish. I just don’t get why fans are so unwilling to let young players develop? Wait I know the answer to that question but does anybody else know that answer?