This will no doubt be the biggest offseason of quarterback activity that I can remember. From Tom Brady and Philip Rivers to Jameis Winston and Teddy Bridgewater, there could be so many faces in new places that we may literally need a scorecard to make sense of it all. Rivers is officially not returning to the Chargers as he has moved his family to Florida. Speculation is that he could go to Tampa or Miami but most believe he’s bound for Indianapolis. I still think Brady stays in New England and I think Bridgewater is going to get a really big contract from someone but I don’t know who. It is truly incredible to me that the draft class of 2004 is where it is. Eli Manning is retired. Rivers has regressed and is looking at his last opportunity and Ben Roethlisberger remains a question mark. I’ve never looked so forward to free agency I can tell you that much.

Tweet of the Day… I have my thoughts as to who this is directed at but heck, it may in fact be us at SCB. We’ve not been real secretive about the fact that the Steelers shouldn’t give James Conner another contract simply because he cannot stay healthy. That doesn’t mean we don’t think he’s a capable back or that we think he isn’t a great guy, it’s purely a football opinion that I know many others share.

There is talk that the NFL could start flexing Monday Night Football games in an effort to make them more attractive to television audiences. I mean, some fans just aren’t into a Cardinals-Lions Monday Nighter right? While the idea itself has some merit, we must also consider the fans that actually attend the games. If I get tickets to see the Steelers play a 1pm game in Jacksonville then it gets flexed into Monday night? I’m screwed in terms of lodging, travel, time off work etc. This is an idea the NFL should let slide on by.

Lots of talk about Zach Banner sliding into the right tackle spot should things break the right ways along the offensive line in 2020. Personally, I’m not convinced of this yet. Banner was a fun and terrific story last season as the Steelers “eligible” tackle but I don’t see him being ready to take on the full-time job. That doesn’t mean he can’t win it during camp but right now I just don’t think he is going to be the guy. If his pass protection improves enough then who knows? 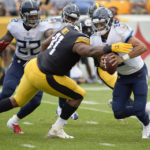