SCB Steelers Quick Hitters: The ‘Nowhere But Up’ Edition 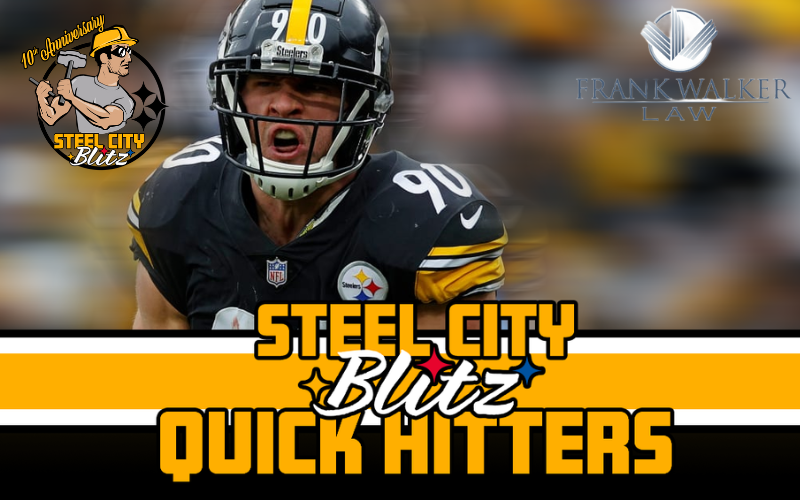 As the Pittsburgh Steelers return to work today from the mandatory four days off, they find themselves with nowhere to go but up. All three of their fellow division teams are above them and the Baltimore Ravens will look to put more distance on the Steelers tonight when they play in New Orleans. Speaking of… It’s the Saints who will be the opponent for the Steelers when they return to action next Sunday at Acrisure Stadium. There is some good news however an that is the return of Trent Jordan Watt. I’m going to be as realistic as I can here; don’t expect miracles from him. I do not expect him to be 100% in any way, shape or form. Oh I expect him to play hard and with the usual fire and determination we expect but let’s forget he’s dealing with not just a pectoral injury. He also had a procedure done on his knee as well. The Steelers’ medical team would not put him out there if they didn’t feel he was ready. As all of us know however, there are no guarantees. Having T.J. Watt back out there however should provide a much needed boost to the entire team. Will it translate into wins? That’s to be determined.

Episode 292 of the SCB Steelers Podcast presented by DEK Roofing Inc is available for your listening and/or viewing pleasure. Lots of great stuff on the Steelers, Chase Claypool, William Jackson III and much more. Don’t forget you can join us live on YouTube at 10:05pmET Thursday nights.

Did you hear that sound last night? It was the cacophony of tweeters pounding their keyboards in a rush to comment on whether the Steelers did the right thing in drafting Kenny Pickett or Malik Willis. Willis started his second straight game last night for Tennessee and nearly pulled off the win in Kansas City before losing 20-17 in overtime. Many have suggested that the offense Matt Canada runs is “like a high school offense” and there’s some truth to that. Did you see what the Titans were doing last evening? It was even more high school than the Steelers. Read option left and read option right for the most part. Willis finished 5/16 for 80 yards and was sacked three times. He also rushed 8 times for 40 yards. For the last two weeks he has not completed a pass to a wide receiver. Ultimately, Willis could turn out to be better than Pickett, but right now Pickett is better and that’s with a worse running game and worse offensive line.

I’m very curious to see how the Steelers use their cornerbacks this coming week. With William Jackson III now in the fold, will he jump right into the starting lineup? Was Ahkello Witherspoon’s performance in Philly so bad that he won’t see the field unless absolutely necessary? How much time does James Pierre get? Is Levi Wallace healthy enough to play? Cam Sutton and Arthur Maulet seem to be the only constants when it comes to the cornerback position right now.

SCB Steelers Podcast 292 – BYE for the Steelers and Bye Chase