According to Mason Rudolph, Josh Dobbs will start the preseason finale in Carolina on Thursday. He also said that he will get time in the first half and that Devlin Hodges is expected to play most if  not all of the second half. I have to say I’m a bit surprised if they (Dobbs and Rudolph) play roughly equal snaps. This suggests that they haven’t made a decision on who is the backup just yet. I’m not sure I buy that but it looks that way doesn’t it? I still believe Rudolph is the number two and I won’t change my mind until Mike Tomlin says otherwise. Getting him some game reps is probably important considering he may not see the field again in 2019.  This year’s quarterback situation is quite unique for the Steelers and I’m excited to see where it ends up this weekend.

The End of the Allen Experiment

The Steelers announced yesterday that Brian Allen, a late round pick from the 2017 Draft, was being placed on the waived/injured list after spraining his ankle last week. This ends the three year experiment of just where Allen should play. The tall and athletic Allen seemed like a good fit at cornerback but also was thought to be a potential safety but neither seemed be a good fit for him. To replace him on the roster, the Steelers were awarded Jhavonte Dean off waivers. Dean played in the first three preseason games with the Browns.

Tweet of the Day… One of the funnier twitter accounts around. You have to have a little football acumen too.

Just called the police and accused the coach of the youth football team we face in week 1 of selling meth, tax evasion, and soliciting a prostitute. For good measure, I called the church he attends and told the pastor the same thing. That oughta keep him occupied for a few days.

Several reports indicated that Joe Haden claims to be about “90% ready” after dealing with his recent foot injury. That tells me if the season opener were tomorrow Haden would be playing… Ola Adeniyi is looking at a couple of more weeks before he’s ready to go. With Anthony Chickillo also banged up the ‘Tuzar Skipper fan club’ will be pushing hard for him to make the roster.

I think Josh Dobbs has done a lot of nice things this preseason but if you need further proof of how ridiculous these “grades” are from Pro Football Focus then look no further than the game against Tennessee. They rated Dobbs as the highest graded player. I’ll just leave it at that. 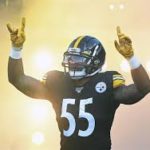 Three Players Who Could Stand Out For The Steelers In 2019