It’s now official. The Pittsburgh Steelers will play the Dallas Cowboys on August 6th in the Hall of Fame Game in Canton, Ohio. This has been speculated for some time and even Team President Art Rooney II assumed as much as far back as January. With Troy Polamalu, Bill Cowher and Donnie Shell all being inducted into the HoF, this was as much of a guarantee as just about anything could be these days. Let’s hope the facility has upgraded all of it’s playing surface since the last time the Steelers were there. Google’Shaun Suisham Hall of Fame Game’ if you’re wondering why.

Yesterday, the NFL Players’ Association extended the voting on the CBA proposal to Saturday at 11:59pm on Saturday. The voting was originally supposed to end on Thursday night at the same time. With that extension, there is speculation that the NFL may also push back the deadline for using the Franchise Tag to the same time. This makes sense because both sides want to know exactly what they’re dealing with heading into the new season. A new CBA is much different than playing a final year under the current one especially in financial terms. You’ll notice the Steelers have yet to slap the Tag on Bud Dupree and I have no doubt that this CBA vote is exactly why they and several other teams are waiting. As I was typing this UPDATE came across the wire…

BREAKING: The @dallascowboys and the @steelers will face each other in the 2020 Hall of Fame Game on 8/6 at Tom Benson HOF Stadium. #PFHOF20

Tickets will go on sale this Friday (3/13) at 10am ET. pic.twitter.com/uMSFIPWf3X

With the Steelers now playing August 6th this means that Training Camp in Latrobe will kick off one week earlier than usual. While you and I may be excited about this, I have no doubts that the players are less than thrilled to know they’ve just lost a week on the summer vacations. At the end of the day it won’t matter much in the grand scheme of things but it does give the Steelers’ Staff that extra week for evaluation of players. Whether they need that extra week is certainly debatable.

ESPN.com took a look at the best and worst free agent signings for the Steelers. Their best was Joe Haden and that makes total sense although I would accept arguments for James Farrior as well. The worst was Ladarius Green. He was the tight end who had concussion issues but was signed to a 4-year $20 million contract but played in just six games for the Black and Gold.

SCB Steelers Quick Hitters: The “Drafting a Back” Edition 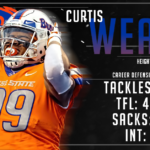